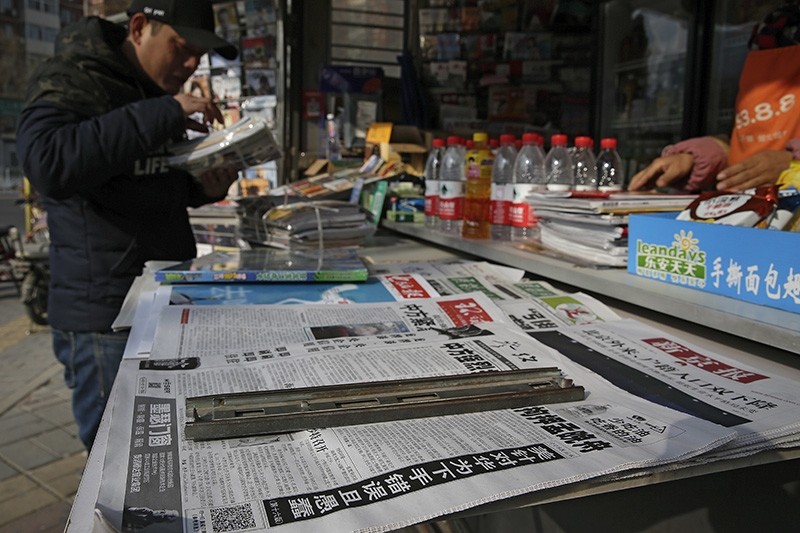 A man arranges magazines near newspapers with the headlines of China outcry against U.S. on the detention of Huawei's chief financial officer, Meng Wanzhou, at a news stand in Beijing, Monday, Dec. 10, 2018. (AP Photo)
by Daily Sabah with AFP Dec 10, 2018 12:00 am

China on Sunday warned Canada not to follow suit with Australia and New Zealand by limiting tech giant Huawei's operations, accusing the country of doing the United States' "dirty deeds" over the arrest of a top Huawei executive.

An editorial published on China Daily's website on Sunday stated: "It is to be hoped that Canada will not simply hold a candle while the devil does its dirty deeds."

The article slammed Australia and New Zealand for allegedly allowing the U.S. to meddle in their politics by encouraging them to restrict the use of Huawei technology as a result of the Five Eyes intelligence alliance between the U.S., U.K., Australia, New Zealand and Canada.

The editorial said that while Canada said it would not "let politics slip into decisions," "unfortunately, that is what it is now doing" by arresting Huawei's global Chief Financial Officer Meng Wanzhou.

Meng was arrested in Vancouver while changing planes on Dec. 1, the same day that U.S. President Donald Trump and Chinese counterpart Xi Jinping agreed to a truce in their trade battle and gave negotiators three months to find a compromise. The detention was carried out at the request of the U.S. judicial authorities, who claim Huawei violated the sanctions the U.S. has imposed on Iran.

China Daily accused the U.S. administration of trying to limit the use of Huawei technologies –the biggest global supplier of network gear for phone and internet companies – in order to reserve that spot for its own companies, adding: "The latest move targeting Huawei is nasty."

"The U.S. has been pressuring the other 'Five Eyes' to limit the use of Huawei technology," the article said.

Yucheng reportedly told Branstad on Sunday that the U.S. had made an "unreasonable demand" on Canada to detain Meng. He said China would "respond further depending on U.S. actions," similar to the warning he gave to the Canadian ambassador on Saturday.

"The actions of the U.S. seriously violated the lawful and legitimate rights of the Chinese citizen, and by their nature were extremely nasty," Le told Branstad, according to the Chinese Foreign Ministry.

China on Monday protested Canada's "inhumane" treatment of Meng, citing reports she was not getting sufficient medical care.

Meng filed court papers in Vancouver arguing she should be released on bail from her Canadian jail.

In a sworn affidavit, the 46-year-old woman said she has been treated in a Canadian hospital for hypertension since her arrest 10 days ago.

China's state-run Global Times newspaper reported, without citing sources, that "it seems that the Canadian detention facility is not offering her the necessary health care."

"We believe this is inhumane and violates her human rights," foreign ministry spokesman Lu Kang said at a regular press briefing, citing such reports.

The Wall Street Journal reported earlier this year that U.S. authorities were investigating whether Huawei violated sanctions on Iran. Huawei has said it complies with all laws and rules where it operates, including export controls and sanctions of the United Nations, the U.S. and European Union.