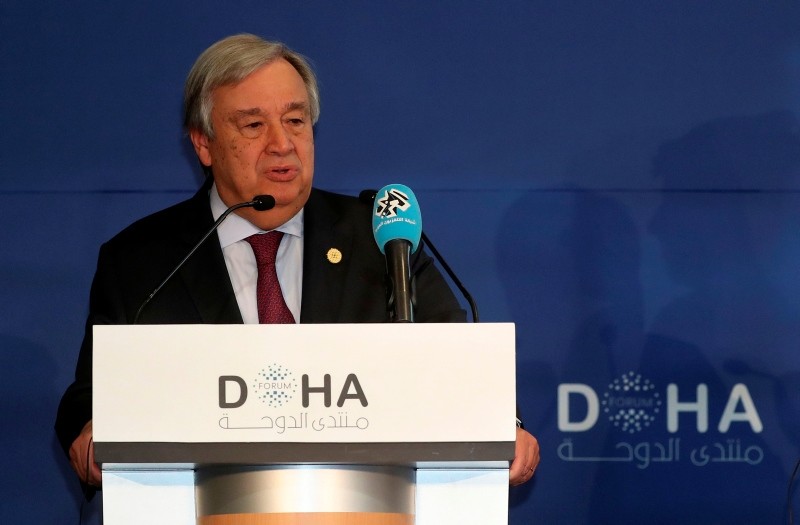 United Nations' Secretary General Antonio Guterres delivers a speech during the Doha Forum in the Qatari capital on December 16, 2018. (AFP Photo)
by Dec 16, 2018 12:00 am

"It is absolutely essential to have a credible investigation and to have the punishment of those that were guilty," Guterres said at a conference in Doha.

The U.N. chief said he had no information on the case except what had been reported in the media.

Khashoggi, a Saudi contributor to the Washington Post, was killed on October 2 shortly after entering the kingdom's consulate in what Riyadh called a "rogue" operation.

Saudi Arabia has repeatedly rejected Turkish demands to extradite suspects connected to the murder of the journalist, a critic of Crown Prince Mohammed bin Salman.

Foreign Minister Mevlüt Çavuşoğlu said Saturday that Turkey would "not give up" on establishing the truth about the murder.

"We haven't received any new information or outcome of the investigation from the Saudi side," Çavuşoğlu said, also in Qatar which has been the target of a Saudi-led boycott since June 2017.

"Turkey will not give up on this, we will see this to the end."

Earlier this month, the minister said Turkey was in talks over a possible United Nations investigation into the killing which has provoked global outrage.

According to Turkey, a 15-member Saudi team was sent to Istanbul to kill Khashoggi, a palace insider turned critic of the regime.

Riyadh has since detained 21 people over the murder.

Despite speculation that the powerful crown prince ordered the hit, the kingdom has strongly denied he was involved.

The murder has damaged Riyadh's international reputation, and Western countries including the United States, France and Canada have placed sanctions on nearly 20 Saudi nationals.