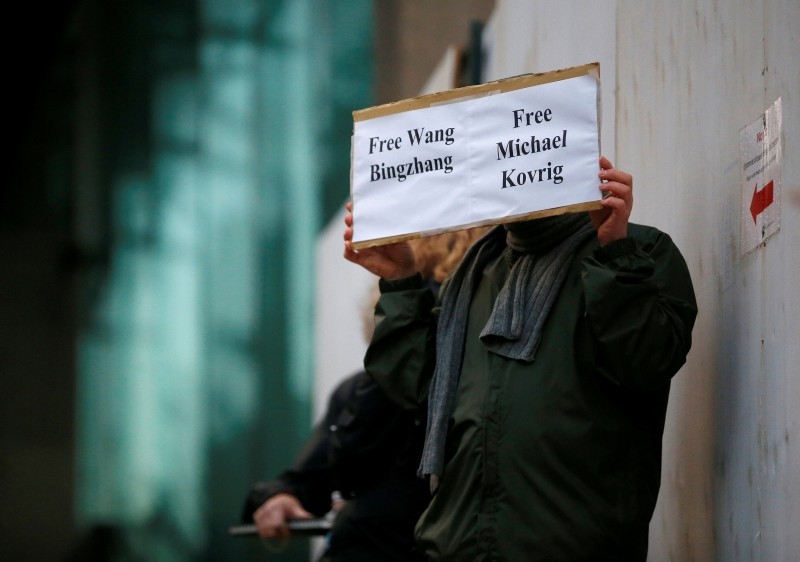 China's ambassador to Canada accused the country Wednesday of "white supremacy" in calling for the release of two Canadians detained in China last month.

The arrests were in apparent retaliation for the arrest of a top Chinese tech executive in Canada.

But Ambassador Lu Shaye's charged in op-ed in the Ottawa-based Hill Times that Western countries are employing a "double standard" in demanding the immediate release of the Canadians.

"The reason why some people are used to arrogantly adopting double standards is due to Western egotism and white supremacy," Lu writes.

China detained Canadian ex-diplomat Michael Kovrig and entrepreneur Michael Spavor on Dec. 10 on vague allegations of "engaging in activities that endanger the national security" of China.

The arrests came 10 days after Huawei executive Meng Wanzhou was arrested in Canada at the request of the U.S., which wants her extradited to face charges that she misled banks about the company's business dealings in Iran. A Canadian judge granted Meng bail while she awaits extradition proceedings.

Le writes that "elites" in Canada are completely dismissing China's law by demanding the immediate release of the Canadians.

"It seems that, to those people, the laws of Canada or other Western countries are laws and must be observed, while China's laws are not and shouldn't be respected," Lu writes.

Lu also writes that Meng was arrested without violating any Canadian law, suggesting that Canada should never detain someone for extradition.

"It seems that, to some people, only Canadian citizens shall be treated in a humanitarian manner and their freedom deemed valuable, while Chinese people do not deserve that," he writes.

"I don't know what the ambassador was trying to accomplish but his article won't help China's cause. The reference to white supremacy was bizarre and unfortunate," Paris said.

"There is false equivalency in this article. Canada is a rule of law country. China is a rule by law country and the distinction is important. Meng was not illegally detained as the ambassador claims."

Paris noted Canada is following the letter of the extradition law it has with the U.S. and while the Canadians were grabbed in China under suspicious circumstances and China has held them without charge.

Julian Ku, Senior Associate Dean for Academic Affairs at Hofstra Law, called Lu's claims ridiculous and said he is playing the race card in an apparent effort to win sympathy from Chinese Canadians and Americans.

"He's making it seem like the two legal proceedings are morally equivalent and they are not," he said. "On one side you have due process, which makes a huge difference, and the other side you don't, but he says it's all the same."

Ku noted China has still not revealed any specific information about what Kovrig and Spavor are charged with and have not given them a judicial hearing and thus Canada is not wrong with calling the arrests arbitrary.

"I am struck by how brazen they are being by making this appeal," Ku said. "He says "You are being racist by not respecting our law.' That's an easy card to play."

A message for the Chinese embassy in Ottawa was not immediately returned.

Lu also seemed to admit detaining the Canadians was in retaliation for the Meng arrest.

"I have recently heard a word repeatedly pronounced by some Canadians: bullying. They said that by arresting two Canadian citizens as retaliation for Canada's detention of Meng, China was bullying Canada. To those people, China's self-defence is an offence to Canada," Lu wrote.

Alex Lawrence, a spokesman for Canadian Foreign Minister Chrystia Freeland, did not address Lu's claims, but reiterated that Canada is "deeply concerned by the arbitrary detention by Chinese authorities of two Canadians last month and reiterate our call for their immediate release."

Canada has embarked on a campaign with allies to win the release of the detained Canadians. The U.S., the U.K. the EU and Australia have issued statements in support. Trudeau called U.S. President Donald Trump this week about it and the White House called the arrests of the Canadians "unlawful."

"Canada remains closely engaged with partners, who have also spoken in support of these detained Canadians and the rule of law, including the United Kingdom, France, Germany, the EU, the United States, and Australia," Lawrence said.