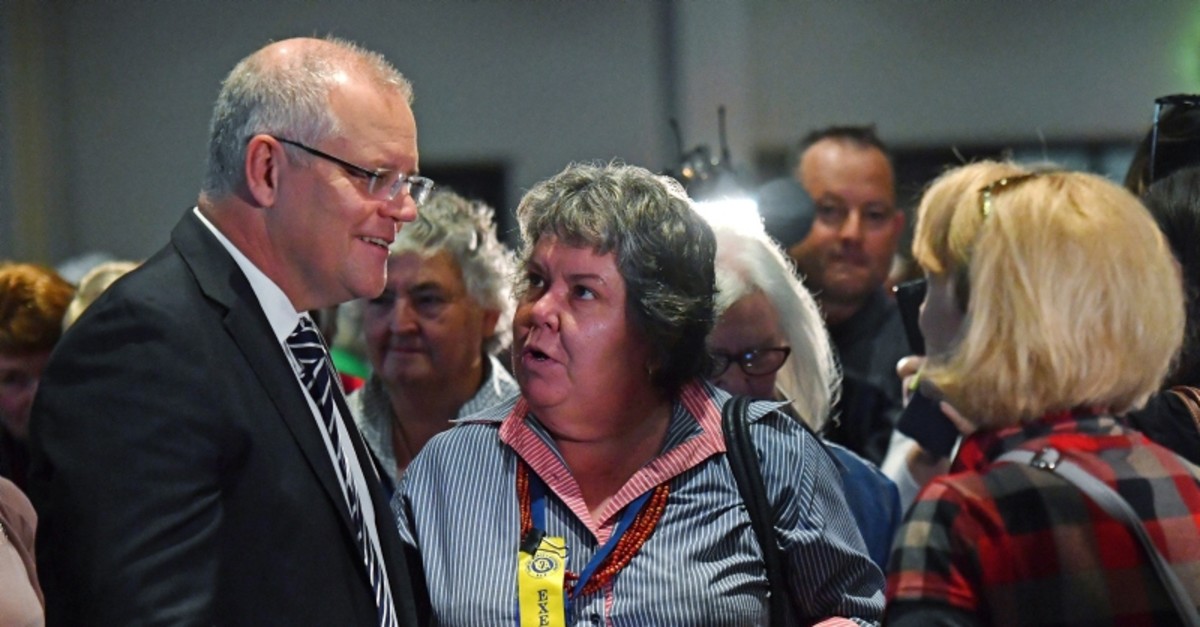 Australian Prime Minister Scott Morrison, left, talks with attendees at the Country Women's Association NSW annual conference in Albury, Tuesday, May 7, 2019 (AP Photo)
by May 07, 2019 10:15 am

Australian Prime Minister Scott Morrison was egged by a protester at a campaign event on Tuesday, less than two weeks ahead of parliamentary elections.

Footage of the incident showed a young woman, who was wearing a hat, being swiftly taken away by Morrison's security.

The egg apparently did not smash and bounced off the prime minister's head but an elderly woman was knocked to the ground in the brief skirmish at the Country Women's Association in the town of Albury, about 200 kilometers south-east of Canberra.

The young woman was reportedly protesting the Morrison government's harsh asylum seeker policy, however, she refused to give any comment on the incident when asked about it by reporters outside the venue.

"I don't want to give a report, no thank you. I've got to go to work. No comment," she said, according to the news agency AAP.

She denied egg-smashing was violent, saying it was "the most harmless thing you can do."

Morrison said her action was "thuggery."

"My concern about today's incident in Albury was for the older lady who was knocked off her feet. I helped her up and gave her a hug," Morrison said on Twitter.

"We will stand up to thuggery whether it's these cowardly activists who have no respect for anyone, or militant unionists standing over small businesses and their employees on work sites," he added.

"There's no doubt the prime minister was a little shocked," one of the attendees told 3AW radio.

Australians will head to the polls on May 18.