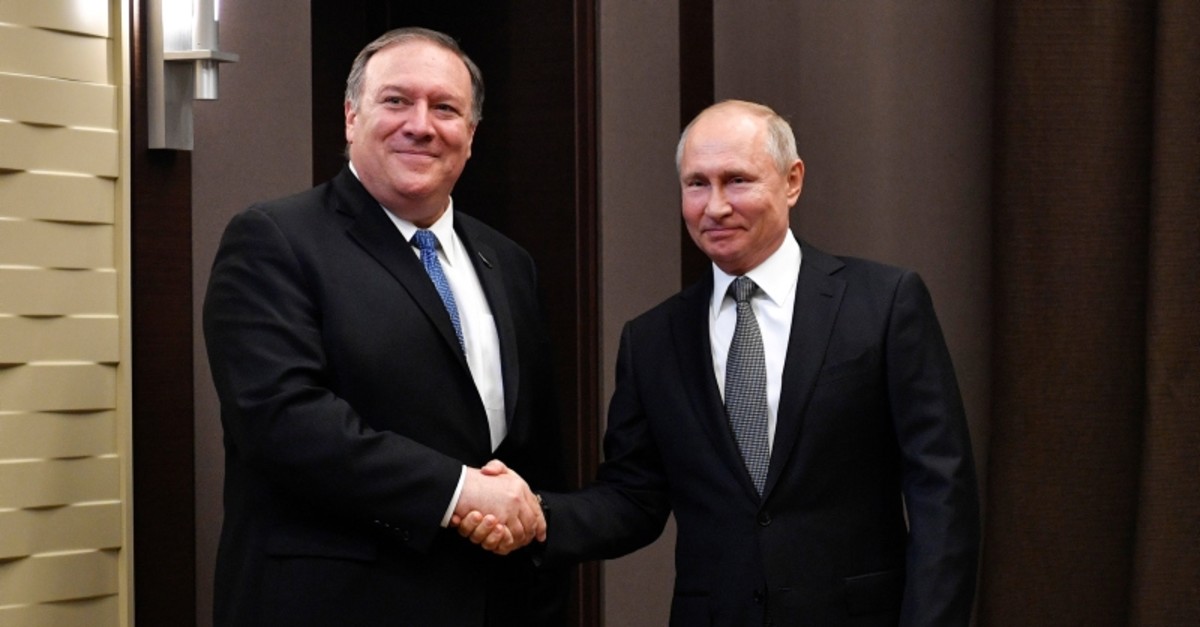 Russian President Vladimir Putin meets with U.S. Secretary of State at the Bocharov Ruchei residence in Sochi, Russia May 14, 2019. (Reuters Photo)
by Compiled from Wire Services May 14, 2019 8:55 pm

Russia and the United States voiced hope for better ties Tuesday as President Vladimir Putin welcomed Secretary of State Mike Pompeo but tensions were laid bare in a clash over election meddling.

In a late-night encounter in Putin's forested dacha in the Black Sea resort of Sochi, Pompeo became the highest-ranking American to meet the Russian leader in 10 months.

"I would very much like your visit to Russia to benefit Russia-U.S. relations and promote their development," Putin told Pompeo as he took a seat across from him in a sleek conference room, saying that they should "fully restore" relations.

Putin praised a two-year investigation by U.S. special counsel Robert Mueller, despite its findings that Russia meddled extensively in the 2016 election on behalf of then-candidate Donald Trump, especially by manipulating social media.

But the probe found that his campaign did not collude with Russia — lifting one cloud that has hung over Trump since his unexpected victory.

"Despite the exotic nature of Mr Mueller's commission, on the whole he conducted quite an objective investigation and confirmed the absence of any collusion between the U.S. administration and Russia," Putin said.

Pompeo, speaking earlier at a joint news conference with Foreign Minister Sergei Lavrov, acknowledged deep differences on election meddling — and warned Russia to stay out of next year's vote.

"Interference in American elections is unacceptable. If Russia engaged in that in 2020, it would put our relationship in an even worse place than it has been," Pompeo said.

"I conveyed that there are things that Russia can do to demonstrate that these kinds of activities are a thing of the past. I hope that Russia takes advantage of those opportunities," he said.

Lavrov hit back against "those who are inflating this topic" and saying of collusion: "It's clear that such insinuations are absolute fiction."

"We want and we are ready to deal with cybersecurity issues along with our American partners, without any politicization," he said.

He said that his mission came from Trump, who has persistently praised Putin — a loathed figure for virtually all of the U.S. political class.

Trump, he said, wants the United States and Russia "to do everything we can" to create a future that is "more successful" for both countries and the world as a whole.

"Some of our cooperation has been excellent — on North Korea, on Afghanistan, we've done good work — (and) counter-terrorism work — together. These are things we can build upon," Pompeo said.

Pompeo was the highest-ranking American to see Putin since July when the Russian leader met in Helsinki with Trump — who shocked the U.S. establishment by seeming to take at face value Putin's denials of election interference.

Pompeo was joined in his talks with Putin by the U.S. ambassador to Moscow, Jon Huntsman, as well as Jim Jeffrey, the U.S. pointman on Syria — a conflict on which Russia and the United States have been diametrically opposed.

The United States has also vowed never to recognize Russia's 2014 takeover of Crimea and has slapped sanctions over Moscow's backing of armed separatists in Ukraine.

More recently, Pompeo has led U.S. charges that Russia is to blame for the continued rule of Venezuelan President Nicolas Maduro, a leftist firebrand whom Washington is seeking to oust.

"The time has come for Nicolas Maduro to go, he has brought nothing but misery to the Venezuelan people, and we hope that Russian support for Maduro will end," Pompeo said at the joint news conference.

Lavrov urged dialogue in Venezuela — an option rejected by the Trump administration, which says Maduro is illegitimate.

He called Venezuela another ill-conceived project by the United States in citing democracy.

"We remember in May 2003 George W. Bush aboard an aircraft carrier declared democracy in Iraq. And in 2011, Libya was declared a democracy. I don't think I need to into more detail on those efforts."