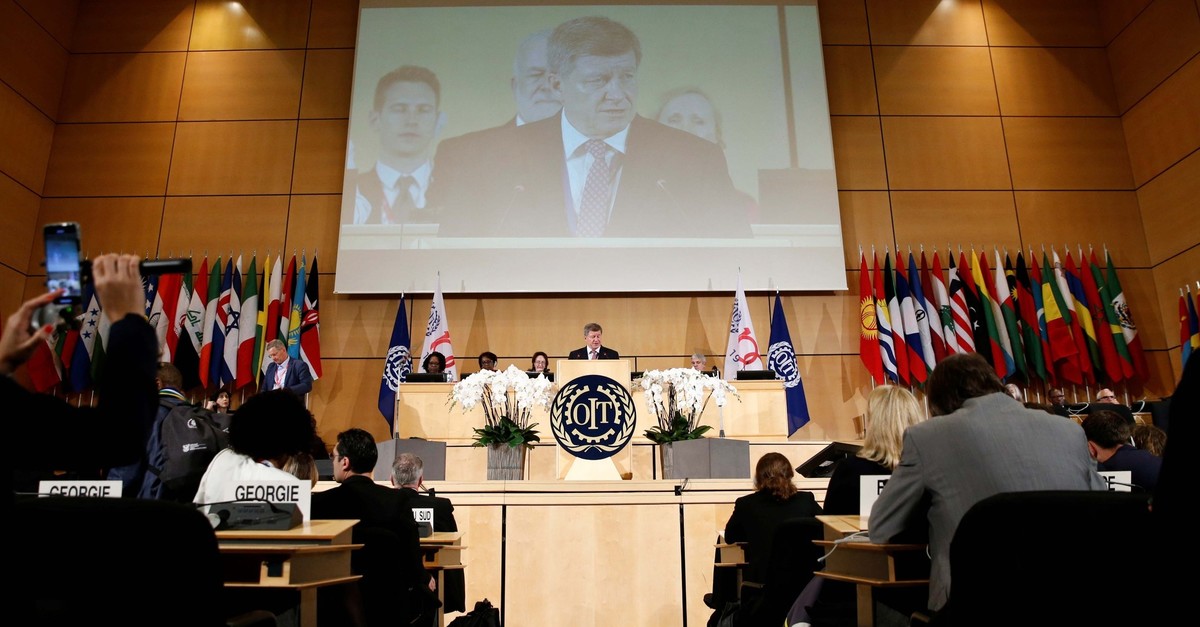 The U.N.'s labor agency has adopted its first convention specifically aimed at reducing violence and harassment in the workplace, with its chief crediting a recent boost from the #MeToo movement.

Delegates exchanged hugs, applauded and whooped in a U.N. conference hall after the International Labor Organization (ILO) overwhelmingly passed the resolution, some four years in the making.

The ILO Convention on Violence and Harassment was adopted 439-7 with 30 abstentions, a top achievement of the ILO's centennial assembly ending Friday. The agency unites businesses, labor groups and 187 member states.

Delegates failed to include language about harassment and violence against LGBT people.

The century-old ILO began its first discussions in 2015, ILO Director-General Guy Ryder said, adding #MeToo had accentuated the "momentum and significance" of the push to adopt the convention.

"For the very first time ... the international community has equipped itself with a global instrument to combat violence and harassment at work," Ryder said after its adoption to cheers.

The #MeToo movement, sparked by sexual harassment and assault allegations against Hollywood mogul Harvey Weinstein in 2017, cast a harsh light on widespread patterns of sexual harassment or abuse in multiple spheres of American life. It has led to dozens of powerful men in entertainment, politics and other fields being accused of sexual misconduct.

The treaty aims to protect workers, irrespective of contractual status, from harassment in places where they are paid, taking a rest, eating or using sanitary facilities.

Ryder said the next step was national ratifications.

All but six governments voted in favor of the pact, with Russia, Singapore, El Salvador, Malaysia, Paraguay and Kyrgyzstan abstaining, ILO records showed. Employers representatives from Malaysia and several Latin American countries voted against it.

"Nobody should be subjected to violence and harassment at work. It is an epidemic across the world that needs to end," employers' spokeswoman Alana Matheson told the talks.

The text aims to protect all workers in the public and private sectors plus the informal economy.

"No-one should be expected to endure any form of gender-based violence and harassment when they come to work - whether it is persistent comments and jokes, leering, sexist remarks, groping or worse," said Marie Clarke, the workers' vice-chair.

"Sadly, this is the reality for too many workers."

The text does not specifically refer to LGBTi (lesbian, gay, bisexual, transgender and intersex) people as being amongst the most vulnerable, as sought by activists.

Ryder acknowledged that the LGBTi issue was controversial, but said: "The spirit of the Convention ... is that everybody falls under the protection of this Convention."

Ryder conceded there had been "contentious" negotiations on the convention that establishes protection standards for workers worldwide on a range of issues, including sexual harassment.

A major stumbling block, he said, was defining "vulnerable groups."

Some governments, including in Africa, opposed a defined list and Ryder said a "better solution" to achieve consensus was a "generic" reference to vulnerable groups.

Iran's representative said the treaty should be considered in accordance with each country's national context, norms and values. The Islamic Republic, which voted in favor, said it had a policy of "zero tolerance" against workplace harassment.

Martha E. Newton, U.S. Department of Labor deputy undersecretary for international affairs, said it was important to note that lawful enforcement of immigration laws should not be construed as harassment under the convention.

U.S. President Trump has made stopping illegal migration one of his signature policy pledges.

Employers had been particularly concerned about whether the convention would seek to hold them responsible for abuses among colleagues that happened away from the workplace.

The text sought compromise by obligating employers to prevent violence and harassment "commensurate with their degree of control," with Metheson saying her camp still had concerns about the text's "scope."

The ILO is the only agency set up under the League of Nations following World War I that survived fascism in Europe and the outbreak of World War II -- ultimately becoming incorporated into the United Nations.