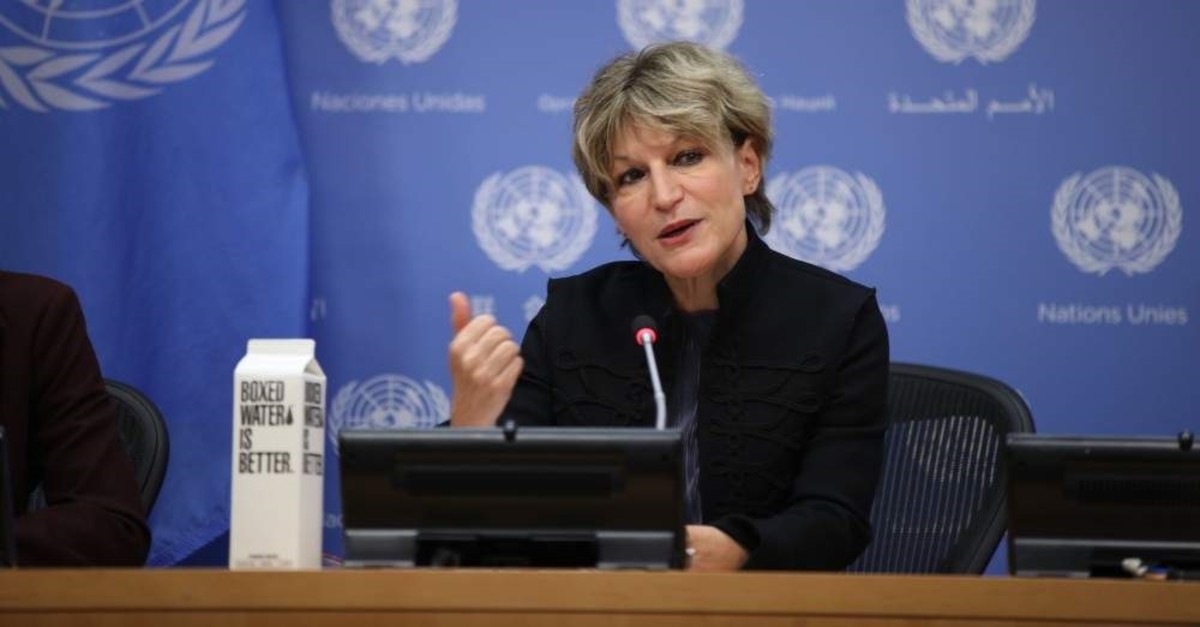 Agnes Callamard, U.N. special rapporteur on extrajudicial executions who issued report on the murder of Saudi journalist Jamal Khashoggi, speaks at a press conference, Oct. 25, 2019. (AA Photo)
by Associated Press Oct 27, 2019 1:59 pm
A U.N. independent investigator said Friday that she regrets that neither Saudi Arabia nor the U.N. secretary-general and U.N. decision-making bodies have taken steps to criminally investigate "the chain of command" behind the Saudi operation that led to last year's execution of journalist Jamal Khashoggi.

Speaking at a news conference a day after delivering a report to the General Assembly's human rights committee, Agnes Callamard said her findings presented to the U.N. Human Rights Council in June showed the Saudi journalist was the victim of "a planned, organized, well-resourced and premeditated extrajudicial killing for which the state of Saudi Arabia must bear responsibility."

But she said "it's really the chain of command that we need to unpack" — who ordered, incited or turned a blind eye to the Oct. 2, 2018, killing and dismemberment of Khashoggi's body at the Saudi consulate in Istanbul, while his fiance waited outside.

Callamard, the U.N. special rapporteur on extrajudicial, summary or arbitrary executions, said she was hoping that Secretary-General Antonio Guterres could take her work and say, "Right, let's at least see what can be done, how far more we can push our understanding of chain of command."

The U.N. wouldn't necessarily have reached "a strong conclusion, but they would have pushed the boundaries of what we as an international community are prepared to do," she said. "That I deeply regret — that the secretary-general and other institutions within the U.N. did not take this opportunity to push further our understanding of chain of command, and our commitment to tackle chain of command."

Khashoggi, 59, was a longtime royal court insider and editor at state-linked newspapers in Saudi Arabia who described himself as worried by the rise of Crown Prince Mohammed bin Salman. He had criticized the prince in his last job as a Washington Post columnist.

Callamard's report said the crown prince's role in the killing should be examined. She said Friday that such an investigation is not part of her mandate.

Saudi Arabia initially offered multiple shifting accounts about Khashoggi's disappearance. As international pressure mounted, the kingdom eventually settled on the explanation that he was killed by rogue officials in a brawl inside the consulate. His body has never been found.

Prince Mohammed, 34, told CBS's "60 Minutes" in an interview last month that he takes "full responsibility" for Khashoggi's grisly killing, but denied ordering it. He called the slaying "a mistake."

Saudi Arabia's trial of 11 suspects has been held in secret and does not include the crown prince's top adviser at the time of the killing, Saud al-Qahtani, who has been sanctioned by the U.S. for his suspected role in orchestrating the operation.

"I have no doubt that a murder was part of the plan," Callamard said Friday. "I also know for a fact that there were many officials in Riyadh that were involved into the organization of this special operation."

She said it needs to be determined how far up the plot went in the Saudi state.

"What I do know is that for a killing of that nature to have taken place in a country such as Saudi Arabia, which is extremely centralized in its decision-making, a number of very high-level officials have to be involved," she said. "I do not know whether the crown prince ordered the crime. What I do know is that there is enough evidence pointing to his responsibility at some level."

Callamard said responsibility could involve a number of possibilities, from ordering or inciting Khashoggi's killing to criminal involvement to knowing but not acting on what he knew.

"I cannot tell you which of those scenarios apply to his case, but what I can tell you is that there is no doubt that one of them applies to his case," she said.
RELATED TOPICS