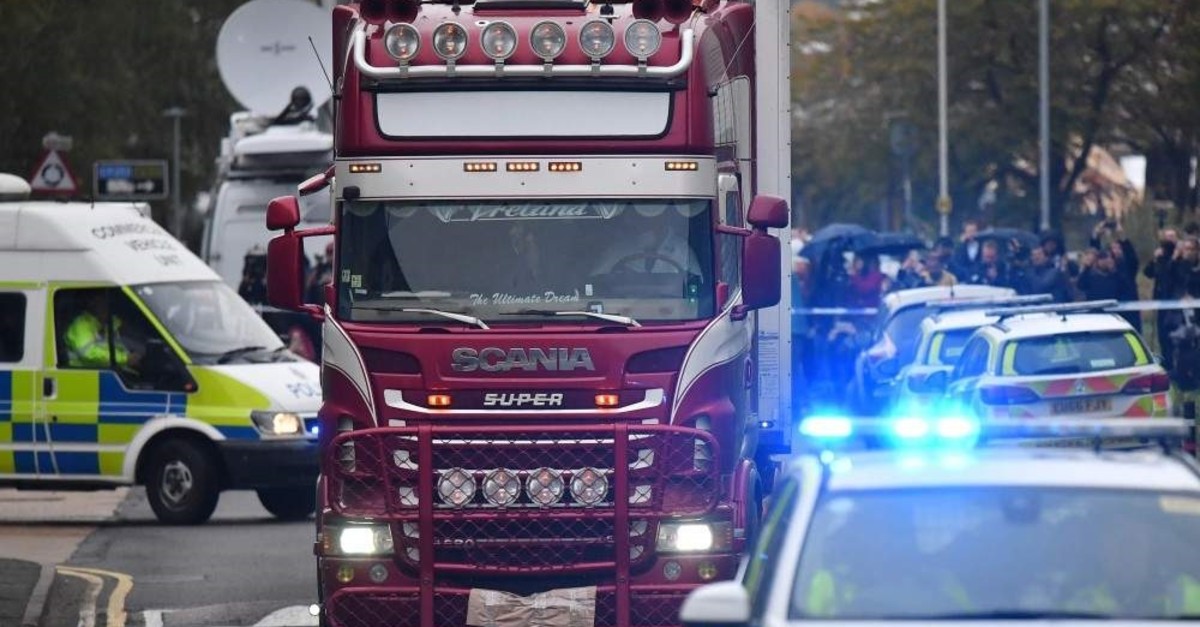 Police officers drive away a lorry in which 39 dead bodies were discovered sparking a murder investigation at Waterglade Industrial Park in Grays, east of London, Oct. 23, 2019. (AFP Photo)
by Compiled from Wire Services Nov 01, 2019 4:17 pm

Police in Vietnam arrested two people and summoned others for questioning Friday on suspicion of involvement in the deaths of 39 people whose bodies were found in the back of a truck in Britain last week, authorities said.
After 10 Vietnamese families reported their relatives missing, fearing they were among the 39 victims, Ha Tinh regional police launched a criminal investigation into suspected human trafficking, the statement posted on their website said.
Two people have been arrested and others brought in for questioning, it said. The investigation would also look at similar incidents that occurred over the last five years.
Meanwhile, a Northern Irish man has been charged with multiple counts of manslaughter in relation to the discovery of 39 bodies in a truck near London last week, an Irish broadcaster said Friday.
Eamon Harrison, 23, appeared in court in Dublin to face 41 charges after the endorsement of a European Arrest Warrant, RTE said.
British police have urged two suspects in the deaths of 39 people found in a truck container last week to turn themselves in.
Essex Police detective Daniel Stoten used a press conference in Northern Ireland Friday to urge the two brothers to surrender to police.
Ronan and Christopher Hughes are being sought by police for questioning about possible links to the grim discovery of 39 bodies in a container truck in southeastern England on Oct. 23.
Police say they have already spoke to Ronan Hughes by telephone but want to talk to the two in person.
Authorities have not yet identified the victims or said where they came from, but many are thought to have come from Vietnam, where families have raised concerns about missing loved ones.
On Oct. 26, Vietnamese Prime Minister Nguyen Xuan Phuc ordered an investigation into alleged human trafficking activities after British police said at least some of the truck dead may have come from the Southeast Asian country.
Last Update: Dec 20, 2019 1:22 am
RELATED TOPICS