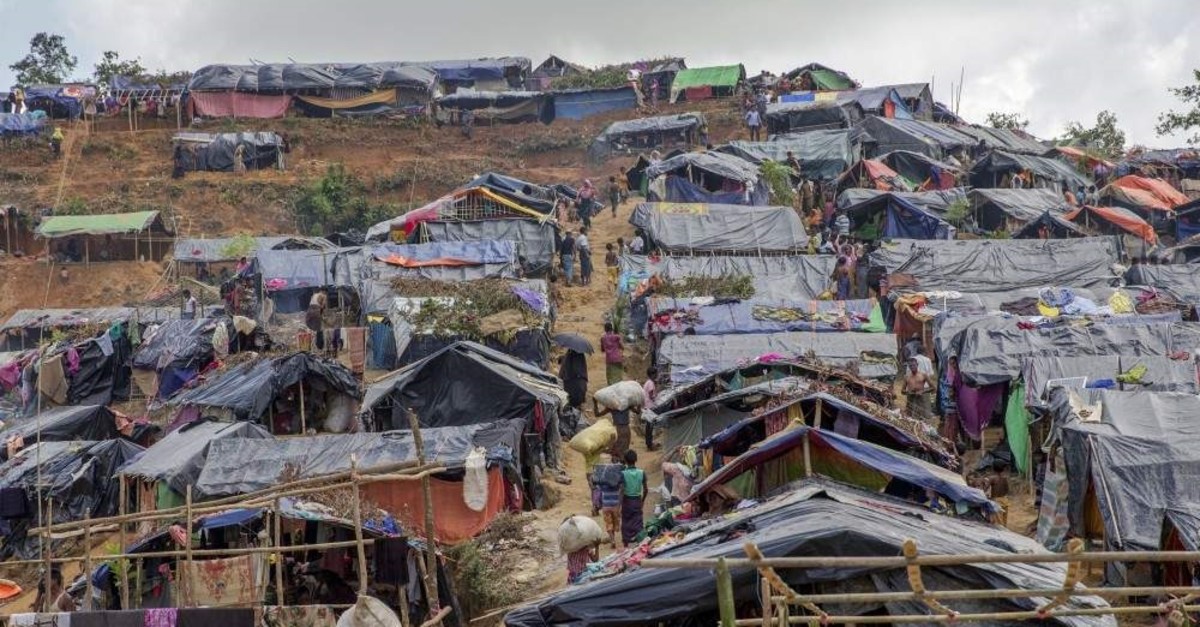 In this Friday, Sept. 22, 2017 file photo, newly set up tents cover a hillock at a refugee camp for Rohingya Muslims who crossed over from Myanmar into Bangladesh, in Taiy Khali, Bangladesh. (AP Photo)
by Compiled from Wire Services Nov 11, 2019 1:50 pm
Gambia has filed a case at the United Nation's top court against Myanmar accusing it of committing genocide against the Rohingya Muslim minority, the country's Justice Minister Abubacarr Tambadou said Monday.
The International Court of Justice (ICJ), also known as the World Court, is the United Nation's top legal institution that rules on disputes between states.
Both Gambia and Myanmar are signatories to the 1948 Genocide Convention, which not only prohibits states from committing genocide but also compels all signatory states to prevent and punish the crime of genocide.
Gambia filed the case on behalf of the Organization of Islamic Cooperation.
Myanmar's military began a harsh military campaign against the Rohingya in August 2017 in response to an alleged insurgent attack. More than 700,000 Rohingya fled to neighboring Bangladesh to escape what has been called an ethnic cleansing campaign involving mass rapes, killings and burning of their homes.
The head of a U.N. fact-finding mission on Myanmar warned last month that "there is a serious risk of genocide recurring."
The mission also said in its final report in September that Myanmar should be held responsible in international legal forums for alleged genocide against the Rohingya.
The case filed at the International Court of Justice, also known as the world court, alleges that Myanmar's campaign against the Rohingya includes "killing, causing serious bodily and mental harm, inflicting conditions that are calculated to bring about physical destruction, imposing measures to prevent births, and forcible transfers, are genocidal in character because they are intended to destroy the Rohingya group in whole or in part."
Attorney General and Minister of Justice Abubacarr Marie Tambadou said in a statement: "The Gambia is taking this action to seek justice and accountability for the genocide being committed by Myanmar against the Rohingya, and to uphold and strengthen the global norm against genocide that is binding upon all states."
The International Criminal Court's prosecutor also asked judges at that court in July for permission to open a formal investigation into alleged crimes against humanity committed against Rohingya Muslims from Myanmar.
Fatou Bensouda said she wants to investigate crimes of deportation, inhumane acts and persecution allegedly committed as Rohingya were driven from Myanmar, which is not a member of the global court, into Bangladesh, which is.
The International Criminal Court holds individuals responsible for crimes while the International Court of Justice settles disputes between nations. Both courts are based in The Hague.
Myanmar's U.N. ambassador, Hau Do Suan, last month called the U.N. fact-finding mission "one-sided" and based on "misleading information and secondary sources." He said that Myanmar's government takes accountability seriously and that perpetrators of all human rights violations "causing the large outflow of displaced persons to Bangladesh must be held accountable."
Last Update: Dec 20, 2019 1:35 am
RELATED TOPICS