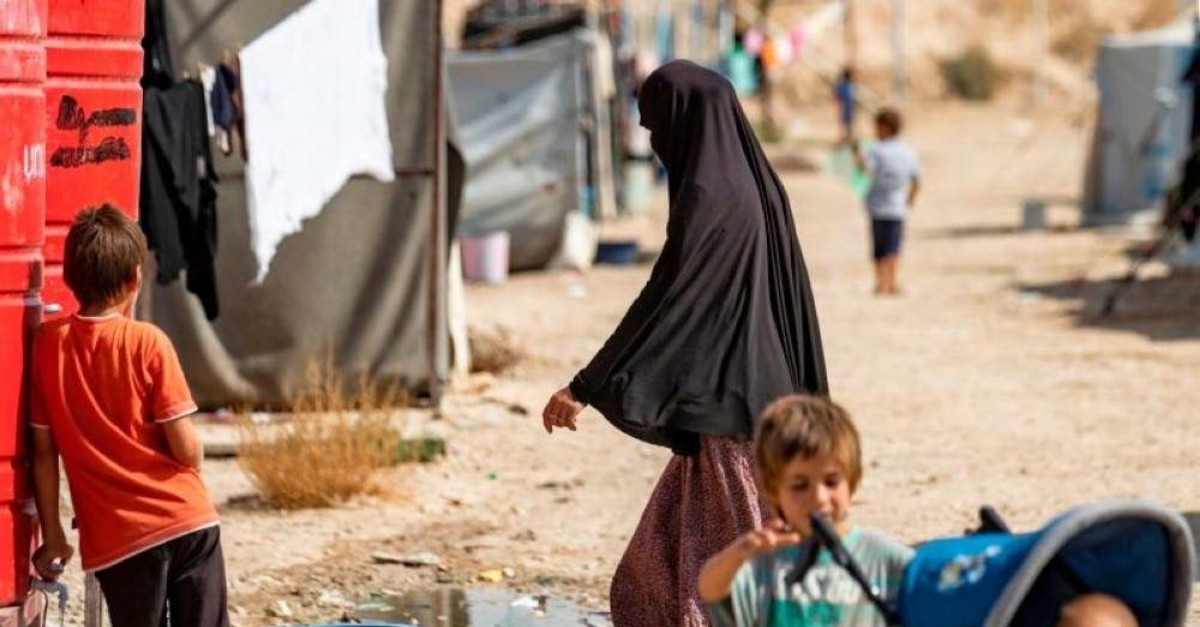 A woman and child are seen near a water tank at the al-Hol camp for the displaced where families of Daesh members are held, in the al-Hasakeh governorate in northeastern Syria. (AFP Photo)
by Daily Sabah with DPA Nov 24, 2019 1:25 pm

A woman believed to have belonged to Daesh terrorist group, together with her three children, have arrived back in their home country Germany, police told Agence France-Presse (AFP) Sunday.

The woman is the first adult female Daesh member to have been returned through official channels to Germany from Syria.

Named only as Laura H., the 30-year-old from Hesse state arrived at Frankfurt Airport late Saturday on a flight from Irbil, Iraq.

While Laura H. was not immediately arrested upon arrival, she remains the subject of an investigation on suspicion of membership of a terrorist organization, as well as child neglect, news weekly Der Spiegel reported, citing security sources.

Her passport has been confiscated and she has been banned from leaving the country, while her children are being entrusted to a close relative, Spiegel added.

According to the magazine, she traveled in 2016 from Giessen in central Germany to Syria with her children and husband, a Somalian-born U.S. citizen. She joined Daesh upon arrival in the country. She had already been linked to fundamentalist circles in Germany and allegedly posted an online call for aid donations for Syria that in reality went to the terror group.

Following her husband's reported killing and her own capture by Kurdish forces, Laura H. claims to have turned away from Daesh ideology.

A U.S. aid organization helped bring her to Irbil from the al-Hol prison camp in northeastern Syria, Spiegel reported.
Turkey has criticized Western countries for refusing to repatriate their citizens who left to join Daesh in Syria and Iraq and stripping some of them of their citizenship. Although the 1961 New York Convention made it illegal to leave people stateless, several countries including France have not ratified it, and recent cases have triggered prolonged legal battles.

Germany had already brought home a handful of orphans, but no adults until Saturday. Austria, Belgium, Britain and France have also repatriated a number of orphaned children, while the United States has repatriated several women and their children. Meanwhile, an Albanian boy taken by his mother to join Daesh in Syria returned to his home in Italy earlier this month. Kazakhstan, Uzbekistan and Kosovo have all repatriated dozens of women and children.