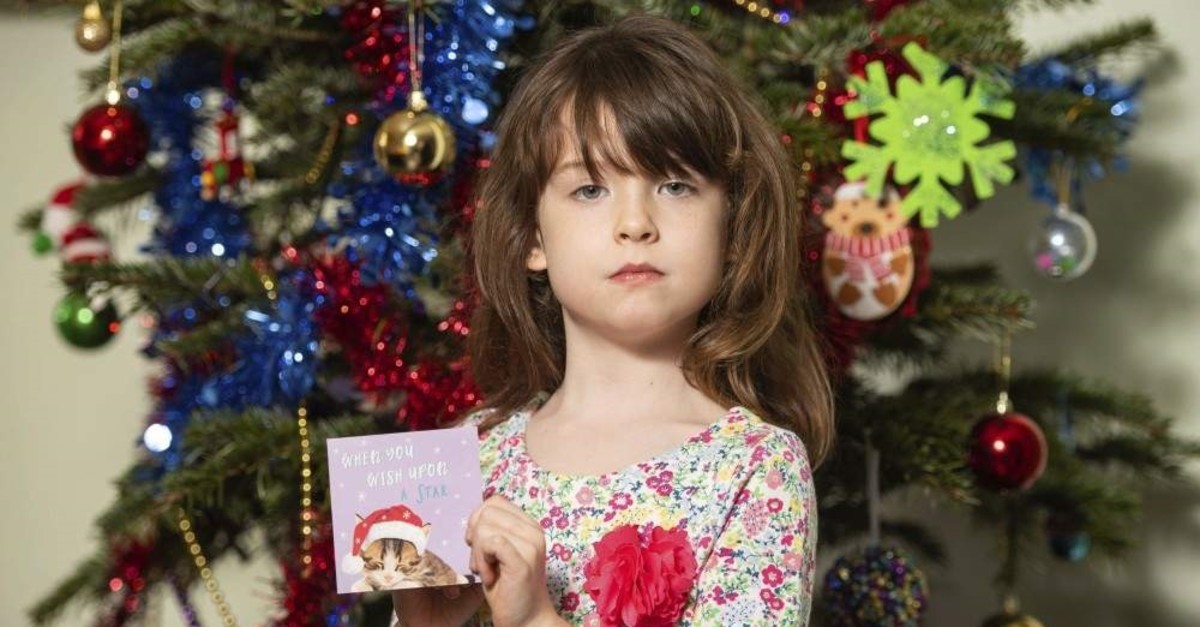 Florence Widdicombe, 6, poses with a Tesco Christmas card from the same pack as a card she found containing a message from a Chinese prisoner, in London, Sunday, Dec. 22, 2019. (AP Photo)
by Compiled from Wire Services Dec 23, 2019 9:00 am

British supermarket giant Tesco suspended a Chinese supplier of Christmas cards on Sunday after a press report said a customer found a message written inside a card saying it had been packed by foreign prisoners who were victims of forced labor.

Tesco said it also launched an investigation of the Chinese supplier it hired to make the holiday cards, Zheijiang Yunguang Printing after the Sunday Times raised questions about the factory's labor practices.

"We abhor the use of prison labor and would never allow it in our supply chain," a Tesco spokesman said on Sunday.

"We were shocked by these allegations and immediately suspended the factory where these cards are produced and launched an investigation. We have also withdrawn these cards from sale whilst we investigate."

The newspaper said the potentially problematic province of the cards came to light when a 6-year-old girl in south London found a card in her box already had a message written inside.

Tesco, Britain's biggest retailer, donates 300,000 pounds ($390,000) a year from the sale of the cards to the charities British Heart Foundation, Cancer Research U.K. and Diabetes U.K.

The Sunday Times said the message inside the card read: "We are foreign prisoners in Shanghai Qingpu Prison China. Forced to work against our will. Please help us and notify the human rights organization.

The cards were produced at the Zheijiang Yunguang Printing factory, about 100 km (60 miles) from Shanghai Qingpu prison, Tesco said.

The company, which prints cards and books for food and pharmaceutical companies, says on its website it supplies Tesco.

A staff member who answered the company's main telephone line on Monday told Reuters they were unaware of the press reports or Tesco's comments. She declined to provide her name. The company did not respond to further emailed requests for comment.

Humphrey and his American wife Yu Yingzeng were both sentenced in China in 2014 for illegally obtaining private records of Chinese citizens and selling the information to clients including drugmaker GlaxoSmithKline. The couple was deported from China in June 2015 after their jail terms were reduced.

The message inside the card was found by the 6-year-old girl, Florence Widdicombe, in London. Her father, Ben Widdicombe, contacted Humphrey via the LinkedIn social network.

Florence Widdicombe said she was "shocked" to see the message on the card. "We opened them about a week ago and we were writing in them, and on about my sixth or eighth card, somebody had already written in it," she told BBC TV.

Her father said at first he thought the note was a prank, but he later realized it was potentially a serious matter and he felt a responsibility to pass it on to Peter Humphrey as requested.

He said the message was eye-opening: "It hits home there are injustices in the world and difficult situations that we know about and read about each and every day."

Widdicombe said finding the message shortly before Christmas was poignant and that he told his daughter, Florence, what it might mean.

Humphrey told the BBC he thinks he knows who wrote the message. He said he won't identify the person for fear the inmate would face retribution.

Humphrey said he was "pretty sure" it was put inside the card by a group of prisoners as a collective request for help.

Writing in the Sunday Times, he initially said he did not know the identities or the nationalities of the prisoners who put the note into the card, but he "had no doubt they are Qingpu prisoners who knew me before my release in June 2015 from the suburban prison where I spent 23 months".

Tesco said it had a comprehensive auditing process in place.

"This supplier was independently audited as recently as last month and no evidence was found to suggest they had broken our rule banning the use of prison labor," the spokesman said.

"If a supplier breaches these rules, we will immediately and permanently de-list them."

Humphrey and his wife said in their trial they had not thought they were doing anything illegal in their activities in China.