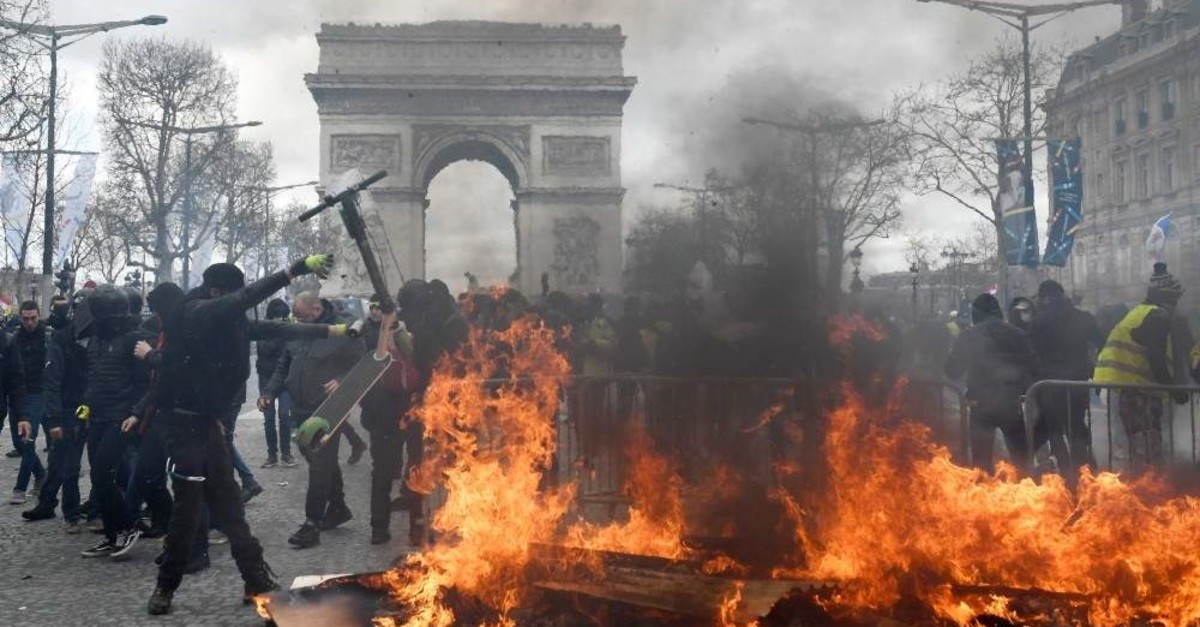 2019 has been a year riddled with countless nationwide protests, mass demonstrations and strikes throughout the world, with angry citizens pushing back against a disparate range of policies but often expressing a common grievance – the establishment's failure to heed their demands for a more equitable future. The year has been especially striking due to the sheer number of protests that took place in various regions worldwide compared to earlier years. The reasons for the protests varied by region, with some of them turning violent. Some are still ongoing and will spill into 2020, in addition to having the capacity of being decisive for the future of whichever country they're happening in.

Wave of protests in MENA region

Popular uprisings swept through MENA (the Middle East and North Africa) countries in 2019. In Sudan and Algeria, anger has mounted toward both countries' militaries. At the heart of the protests was the deep sense of disenchantment felt by people in Algeria and Sudan. There are calls by opposition and civil society groups for protesters not to vacate the public spaces under the control of the people and to keep pushing for change. Sudan's longtime President Omar al-Bashir's downfall in a military coup was the second time that a leader in the region has been forced out amid mass demonstrations after Algeria. Algeria's Abdelaziz Bouteflika, in power since 1999, stepped down on April 2 after six weeks of protests. Since then, the protests have posed a major challenge to the military, which pushed for the elections as the only way to resolve the deadlock between the authorities and the leaderless opposition movement.

In some countries like Iran and Egypt, authorities have tried to curtail social movements by cutting off the internet. In Egypt, several Twitter hashtags have been used to rally support for the protests. The Arabic hashtag "el-Sissi is not my president" was trending with more than 40,000 tweets. Protests broke out on Sept. 20 in Cairo and other cities following online calls for demonstrations against alleged corruption by President Abdel Fattah el-Sissi and the military. Political pressure combined with economic deterioration have caused Egyptians to organize mass demonstrations against el-Sissi. The Egyptian regime detained civil society leaders and politicians in an attempt to stop the spread of mass protests. The mass arrests were seen as the biggest crackdown since the aftermath of the 2013 ousting of the country's first democratically elected President Mohammed Morsi, Human Rights Watch (HRW) reported. Iran experienced a similar fate starting Nov. 15, when a 50% increase in gas prices was announced. The public did not take the decision well, especially after enduring sanctions from the U.S. that were reinstated when President Donald Trump abandoned a multilateral nuclear deal with Iran last year. Hundreds lost their lives in November and internet stoppages have become frequent ever since the protests broke out.

Lebanon has been gripped by violent nationwide protests since Oct. 17 over the country's worsening economic situation. The protests then evolved into a more political direction as the public kept the pressure on the government that they deemed corrupt and insufficient. In Iraq, people have been in the streets for the last three months to protest the government, the U.S. and Iran. The government has long been accused of failing to protect its own people, meet their demands and create balanced relations with Iran. The protesters hold these actors responsible for the deterioration of economic, political and security problems across the country.

The British and the French have been two of the main contributors to political instability and protests in western Europe. British Prime Minister Boris Johnson's dedication to getting Brexit done at the end of 2019 did not come to fruition following Parliament's rejection of Johnson's proposed Brexit timetable in October. Regional demonstrations took place in Britain throughout the process as things started to move faster and Brexit divided the British public even further. In 2020, Johnson will look to resume trade talks with Brussels but there is no clear indication that the Brexit Saga will conclude by its deadline of Jan. 31, especially with recently appointed President of the European Commission Ursula von der Leyen's announcements about a possible delay of the January deadline.

France, on the other hand, experienced a violent yellow vest anniversary in November filled with tear gas, burned cars and water cannons. The protests were significantly smaller in number and less violent compared to the previous year when the movement first broke out. Soon after the protests died down, President Emmanuel Macron faced another challenge because of his willingness to reform his country's pension system, in the form of nationwide transportation strikes and general strikes that have gripped the country in the last month.

South America also had one of the unsteadiest periods in its recent history, with a number of countries having experienced or still experiencing nationwide protests. The highly controversial Oct. 20 presidential election triggered riots and a general strike on Oct. 23 in Bolivia, later resulting in the resignation of the country's first indigenous President Evo Morales in November. The country has been left in political uncertainty without the presence of Morales and has recently been involved in a tense diplomatic feud with Mexico, accusing the latter of meddling with Bolivia's internal affairs. Chile and Ecuador were two other countries that saw nationwide demonstrations and protests this year in South America.

Asia had its share of violence and protests this year, with the controversial anti-Muslim law started mass demonstrations against Indian Prime Minister Narendra Modi. At least 23 people were killed nationwide during protests that represent the first major roadblock for Modi's Hindu nationalist agenda since his party's landslide reelection earlier this year.

On the other side of the continent, Hong Kong has been gripped by violent protests since June, starting because of an extradition bill that would have allowed criminal suspects to be extradited to mainland China under certain circumstances. The bill was indefinitely suspended following weeks of protests and demonstrations. The suspension wasn't enough to put an end to the chaos as clashes between demonstrators and the police became more violent and frequent.