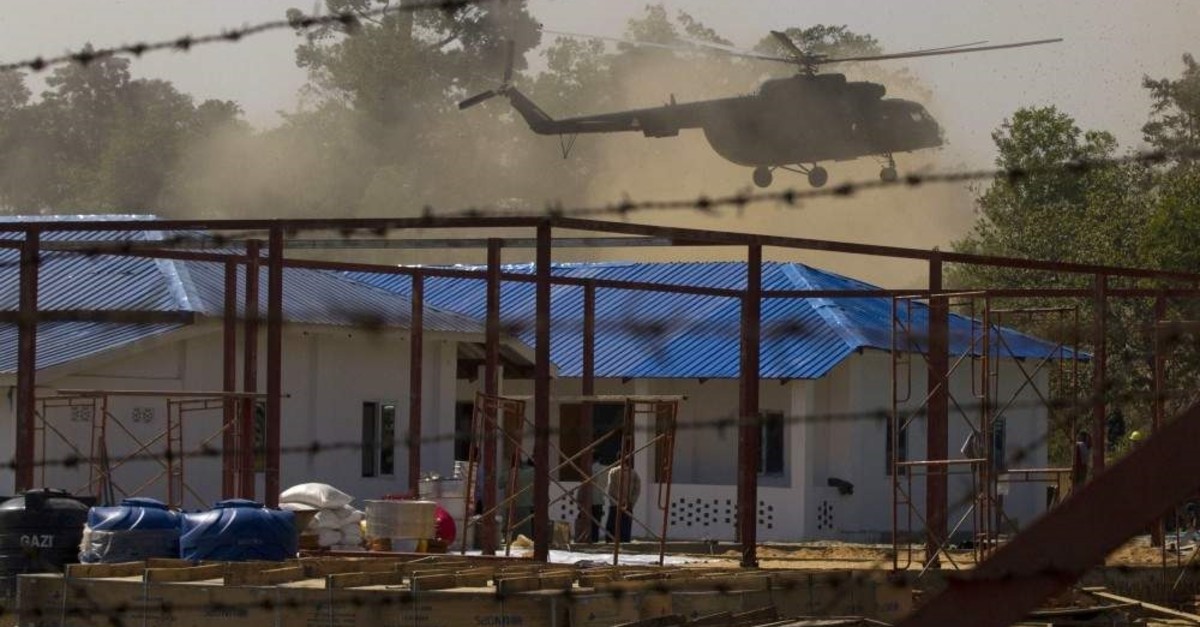 In this Jan. 24, 2018, file photo, a helicopter carrying an advisory commission lands near newly-built repatriation camps prepared for Rohingya refugees expected to return from Bangladesh, in Taungpyo township, a border town of northern Rakhine State (AP Photo)
by Compiled from Wire Services Jan 25, 2020 7:27 pm
Two women, one pregnant, were killed and seven other people injured after Myanmar troops shelled a Rohingya village on Saturday, according to a lawmaker and a villager, two days after the U.N.'s highest court ordered the country to protect the minority.

Maung Kyaw Zan, a national member of parliament for Buthidaung township in northern Rakhine state, said shells fired from a nearby battalion hit Kin Taung village in the middle of the night. Government troops have been battling ethnic rebels in the state for more than a year.

"There was no fighting, they just shot artillery to a village without a battle," he told Reuters by phone, adding it was the second time this year that civilians had been killed.

A spokesperson for the Arakan Army said there had been no fighting with the military in that area and they are "accusing and faking it."

The conflict has seen scores of civilians killed, hundreds wounded and some 100,000 displaced in the past year.

Earlier this month four Rohingya children were killed and five others injured alongside their teacher after an explosion hit while they collected firewood.

Northern Rakhine was the site of a violent military campaign in 2017 that drove some 740,000 Rohingya into Bangladesh and prompted allegations of genocide.

Hundreds of thousands still live in Rakhine in what rights groups have called apartheid-like conditions.

In a rare legal decision for the persecuted minority, the International Court of Justice ruled Thursday that Myanmar had to "take all measures within its power to prevent the commission of all acts" described by the 1948 U.N. Genocide Convention.

These acts include "killing members of the group" and "deliberately inflicting on the group conditions of life calculated to bring about its physical destruction in whole or in part."

The mainly Muslim African state of The Gambia had asked the court to impose the emergency measures -- pending a full case that could take years.

The court also ordered Myanmar to report back within four months, and then every six months after that.

Its ruling is binding but the court has no power of enforcement.

Judges rejected arguments made by Myanmar civilian leader and former human rights icon Aung San Suu Kyi when she traveled to The Hague in December to personally defend the country against the accusations.

Anadolu Agency was unable to reach the central government or military for comment.

Soe Tun Oo, a Rohingya villager living a mile from the village, told Reuters by phone two houses were destroyed in the explosion.

"The military always shoots heavy weapons... They shoot heavy weapons around the area they suspect. It is impossible to flee to other places, even though we are scared."

The Hague-based International Court of Justice ordered Myanmar on Thursday to protect the Rohingya against further atrocities and preserve evidence of alleged crimes, after the west African nation the Gambia launched a lawsuit in November accusing the country of genocide.
RELATED TOPICS