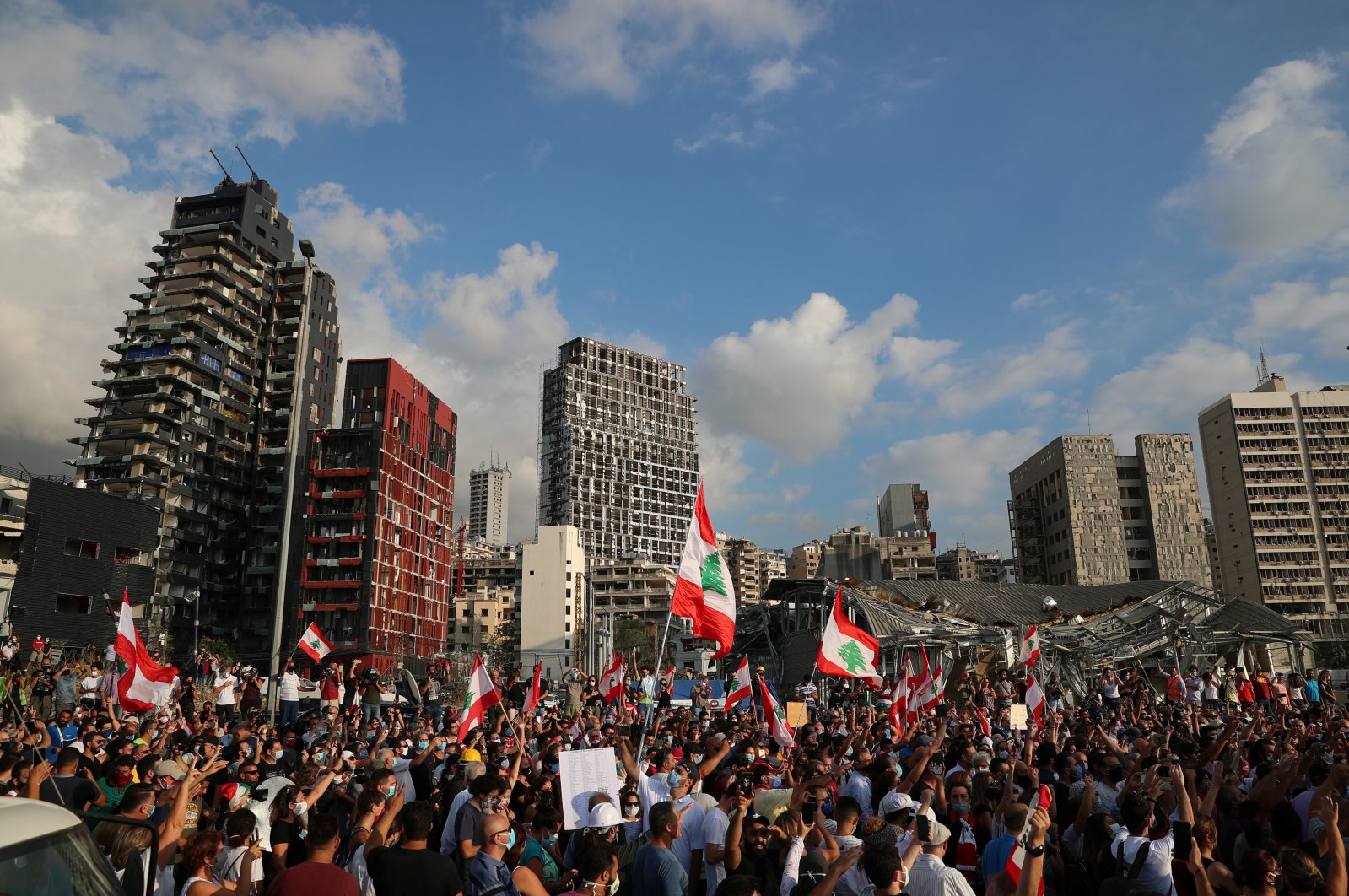 The shattered city of Beirut on Tuesday marked a week since the catastrophic explosion that killed at least 171 people, injured thousands and plunged Lebanon into a deeper political crisis.

Thousands of people marched near the devastated port, remembering those who died in the worst single blast to hit the country.

They observed a minute of silence at 6:08 p.m. local time, the moment on Aug. 4 that thousands of tons of ammonium nitrate exploded in the city's port where it had been stored for more than six years, apparently with the knowledge of top political and security officials.

At that moment Tuesday, church bells tolled and mosque loudspeakers recited a call to prayer.

Hundreds marched through the streets of Gemayze carrying portraits of the dead.

Aoun, in office since 2016, said Friday he was first told of the dangerous stockpile nearly three weeks ago and immediately ordered military and security agencies to do "what was needed." But he suggested his responsibility ended there, saying he had no authority over the port.

A candlelight vigil was planned for after dusk Tuesday.

The explosion has fueled outrage against top political leaders and security agencies and led to the resignation of the government Monday. In the wake of the disaster, documents have come to light that show the top Lebanese officials knew about the existence of the stockpile in the heart of Beirut near residential areas and did nothing about it.

It still wasn't clear what caused the fire in a port warehouse that triggered the explosion of the chemicals, which created a shock wave so powerful it was felt as far away as the island of Cyprus more than 200 kilometers (180 miles) across the Mediterranean.

"From one minute to the next, the world changed for people in Beirut," said Basma Tabaja, deputy head of the International Committee of the Red Cross's delegation in Lebanon.

Outgoing Health Minister Hamad Hassan said the blast killed a total of 171 people, with between 30 and 40 still missing. Of the injured, 1,500 needed special treatment while 120 remain in intensive care, he said.

The explosion damaged thousands of apartments and offices in the capital. It comes amid an unprecedented economic and financial crisis facing the country since late last year.

Efforts to form a new government got underway a day after Prime Minister Hassan Diab resigned. His government, which was supported by Lebanon's powerful Iran-backed Shiite movement, Hezbollah and its allies, unraveled after the deadly blast, with three ministers announcing they were quitting.

His government was formed after his predecessor, Saad Hariri, stepped down in October in response to anti-government demonstrations over endemic corruption. It took months of bickering among the leadership factions before they settled on Diab.

Lebanese have demanded an independent Cabinet not backed by any of the political parties they blame for the mess they are in. Many are also calling for an independent investigation into the port explosion, saying they had zero trusts in a local probe.

Lebanese officials have rejected an international investigation. The government, in the last decision it made before resigning, referred the case to the Supreme Judicial Council, Lebanon's top judicial body, which handles crimes infringing on national security as well as political and state security crimes.

State-run National News Agency (NNA) said after the case was referred to the Supreme Judicial Council, state prosecutor Ghassan Oueidat will continue his work as a general judicial prosecutor.

NNA said the investigation will continue by the military police and state prosecution and charges will be later filed to the judicial investigator, who is to be named by the outgoing minister of justice.

The ammonium nitrate, a chemical used in fertilizers and explosives, originated from a cargo ship called MV Rhosus that had been traveling from Georgia to Mozambique in 2013. It made an unscheduled detour to Beirut as the Russian shipowner was struggling with debts and hoped to earn some extra cash in Lebanon. Unable to pay port fees and reportedly leaking, the ship was impounded.