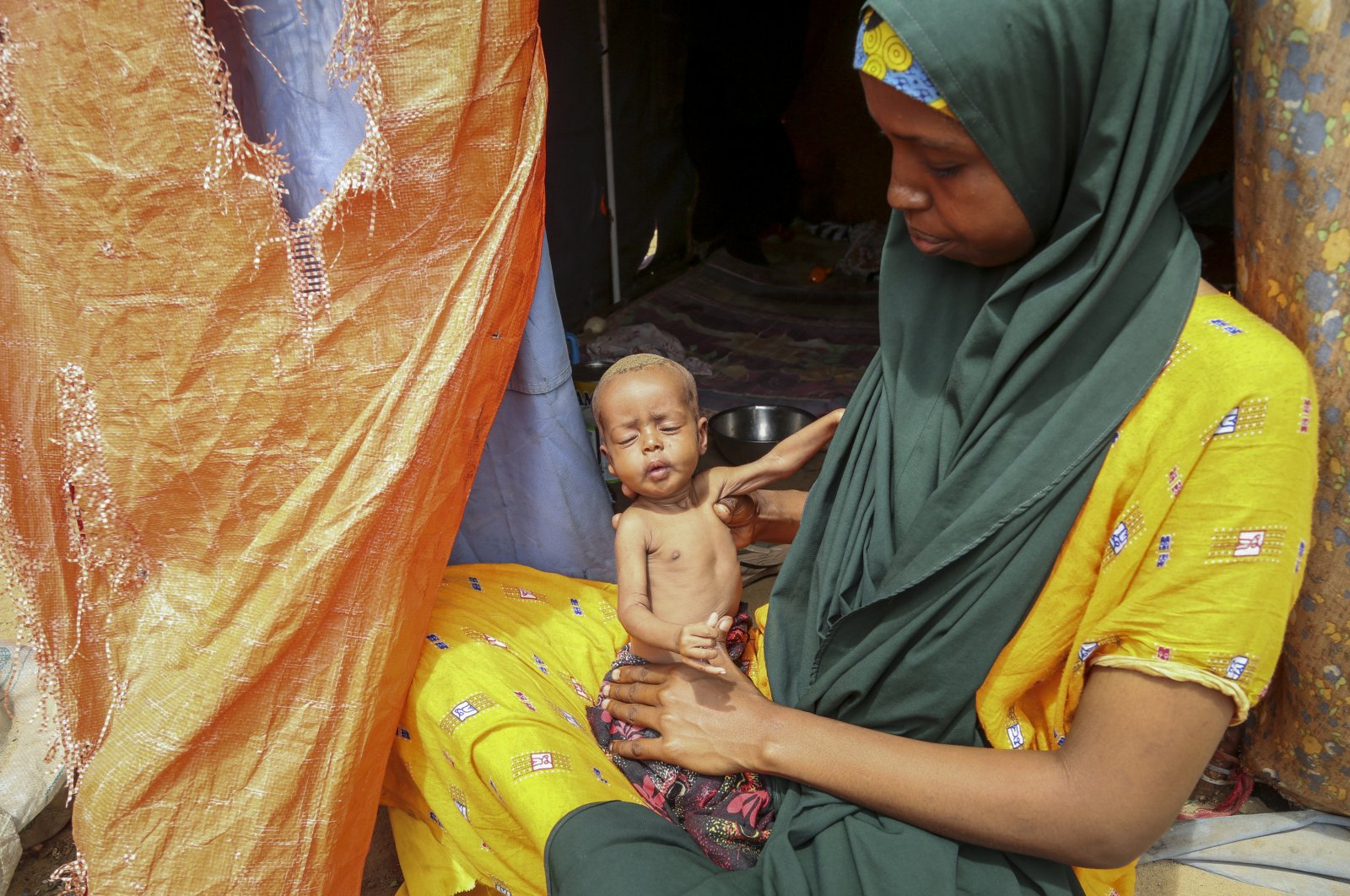 Amina Shuto, 21, who fled the drought-stricken Lower Shabelle area, holds her 2-month-old malnourished child at a makeshift camp for the displaced on the outskirts of Mogadishu, Somalia, June 30, 2022. (AP Photo)
by Anadolu Agency Jul 05, 2022 12:39 pm
RECOMMENDED

At least 200 children in Somalia have died of malnutrition since January, the United Nations Office for the Coordination of Humanitarian Affairs (UNOCHA) said late Monday, with the country witnessing "catastrophic food insecurity" for the first time since 2017.

Drought conditions have deteriorated following an unprecedented fourth consecutive failed rainy season in eight regions of the country, up from six regions in May this year, bringing the affected families to the brink of famine, according to the U.N.

"More than 7 million people are affected, up from 6.1 million in May, and over 805,000 are displaced,” said a statement issued by the U.N. humanitarian affairs agency.

In response to the drought, the U.N. said its humanitarian partners have launched the Drought Response and Famine Prevention Plan covering May to December 2022 to facilitate the scaling up of life-saving, life-sustaining assistance to prevent famine in the country.

The plan requires $993.3 million to implement and targets 6.4 million people, the U.N. said. "Since January, 3.9 million people have received lifesaving assistance. However, the scale of the ongoing response and funding from the international community is not sufficient to sustain the lives of all those at risk,” the statement said.

The U.N. also said in the current crisis, late and limited funding is impeding an appropriate increase in assistance. "The current funding situation ($435.8 million, or 30% received), is comparable to 2011, when funding was slow to come in until the declaration of a famine with devastating consequences,” it added.

As of June 30, the severe drought had affected more than 7 million people, an increase from 6.1 million in May, with over 805,000 displaced.

The U.N. said the rapidly increasing humanitarian needs require a massive scale-up as its partners transition from a drought response to famine prevention.

The statement comes hours after Somalia appealed for global aid to cope with the deadly drought.

"For the first time since 2017, the Integrated Food Security Phase Classification (IPC) has confirmed pockets of catastrophic food insecurity affecting more than 213,000 people," the U.N. said.

Somalia is witnessing one of its worst climate change-related droughts in four decades that has devastated the country. During the main period of a devastating famine between May and October 2011, there were more than 20,000 excess deaths per month in southern and central Somalia.