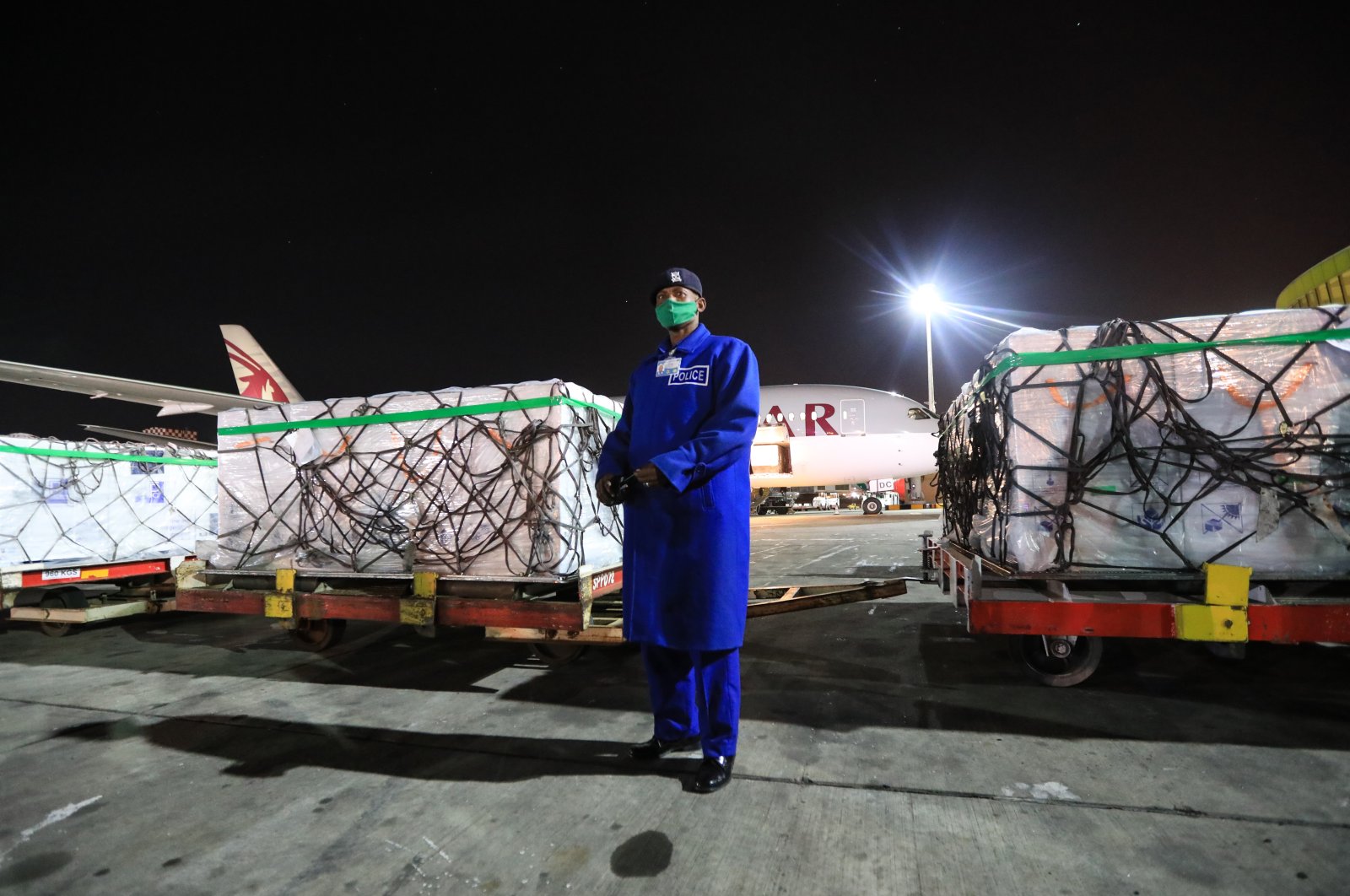 A Kenya police officer (C) stands guard next to some of the first batch of 1.02 million doses of Oxford/AstraZeneca COVID-19 vaccines after their arrival at the Jomo Kenyatta International Airport (JKIA), in Nairobi, Kenya, March 3, 2021. (EPA Photo)
by Associated Press
Mar 03, 2021 2:09 pm

More African countries received the long-awaited first deliveries of COVID-19 vaccines on Wednesday, with Kenya and Rwanda benefiting from the global COVAX initiative that aims to ensure doses for the world’s low- and middle-income nations.

African and other health officials have been frustrated with the sight of a handful of rich countries rolling out vaccines after snapping up large amounts for themselves.

"We will be known as the continent of COVID” if Africa doesn’t quickly reach its target of vaccinating 60% of its population of 1.3 billion people, the director of the Africa Centers for Disease Control and Prevention, John Nkengasong, said last week. The continent last month surpassed 100,000 confirmed deaths, reported The Associated Press (AP).

So far Ghana, Ivory Coast, Nigeria, Angola and Congo also have received their first vaccine doses via COVAX, with several other countries including Mali, Senegal, Malawi and Uganda set to receive them this week.

However, COVAX has faced delays related to the severely limited global supply of vaccine doses as well as logistical issues, and COVAX alone will not supply Africa’s 54 countries with the doses needed to reach the 60% population coverage for achieving so-called herd immunity, when enough people are protected through infection or vaccination to make it difficult for a virus to continue to spread.

That's why some countries such as South Africa, the hardest-hit African nation, are also pursuing COVID-19 vaccines via bilateral deals or via the African Union's bulk-purchasing program.

Despite the various challenges, some health officials expressed jubilation as the first vaccine doses via COVAX arrived.

"We have been fighting the pandemic with rubber bullets but what we have acquired today is equivalent, metaphorically speaking, to bazookas and machine guns,” Kenyan Health Minister Mutahi Kagwe said. Kenya received 1.02 million doses of the AstraZeneca vaccine manufactured by the Serum Institute of India.

The minister said the vaccines will be administered to some 400,000 medical workers and the rest will go to other frontline workers such as teachers and police officers. Kenya, East Africa’s commercial hub, has more than 106,000 confirmed virus cases including more than 1,800 deaths.

Many health workers for months have been disgruntled over the inadequate supply of personal protective equipment. They also say they were never paid the allowances that the government promised them for the extra work and risk while combating COVID-19.

Rwanda received 240,000 doses of the AstraZeneca vaccine, with 102,960 Pfizer doses expected later Wednesday. The health ministry said these first doses will target frontline workers, those above 65 and people with underlying health conditions.