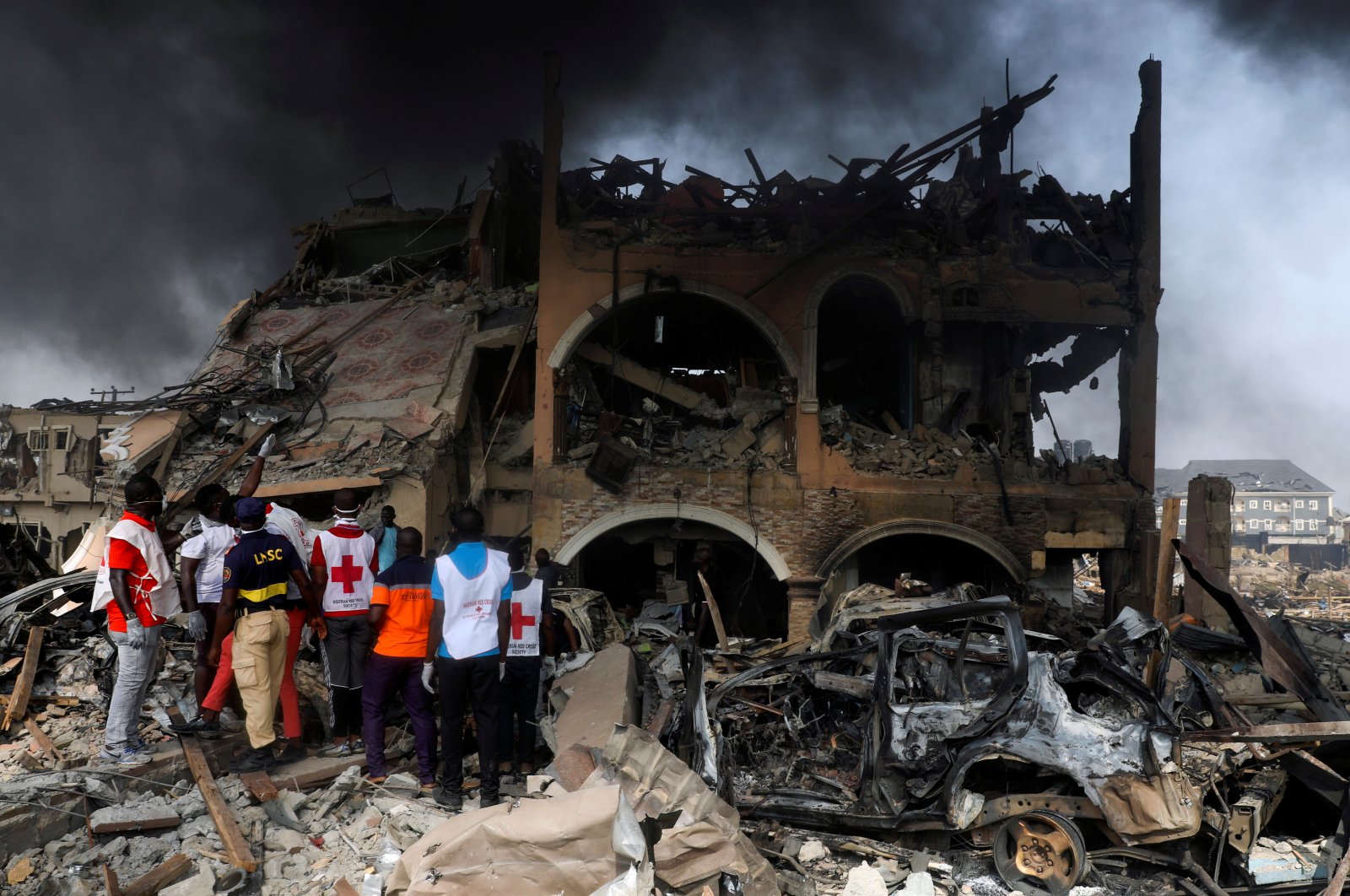 Paramedics and security men observe a building that was damaged by the pipeline explosion at Abule Ado in Lagos, Nigeria, March 15, 2020. (Reuters Photo)
by Compiled from Wire Services Mar 15, 2020 9:03 pm
RECOMMENDED

An explosion at a gas processing plant on Sunday killed at least 15 people and destroyed about 50 buildings after a fire broke out in a suburb of Lagos, Nigeria's commercial capital, emergency services said.

The Nigerian National Petroleum Corporation (NNPC) said the explosion was triggered after a truck hit some gas cylinders stacked in a gas processing plant near the corporation's pipeline in Abule Ado area of Lagos state.

The impact of the explosion led to the collapse of nearby houses, damaged NNPC's pipeline and caused the corporation to halt pumping operations on the Atlas Cove-Mosimi pipeline, the state-owned oil company said in a statement.

"15 bodies have been recovered now. So many people have been injured," National Emergency Management Agency (NEMA) spokesman Ibrahim Farinloye told Agence France-Presse (AFP), adding that around 50 buildings were also destroyed in the explosion which was followed by a fire.

The blast happened at around 8:00 am (0700 GMT) destroyed around 50 buildings in the residential district of Abule Ado. Plumes of smoke billowed into the air as people watched, while firefighters tried to quench the flames, a Reuters witness said.
"We are recovering dead bodies as we speak and putting them in bags," said local Red Cross official Adebola Kolawale.
"We have a school here and it's a residential area. And we have a trade fair here as well," Kolawale said.
In front of a crowd of onlookers, rescue workers sought to remove rubble from a girls boarding school which has more than 250 pupils.

Explosions of pipelines and tanker trucks are frequent occurrences in Nigeria, where most people live in poverty even though the country is the biggest producer of oil on the continent, with around 2 million barrels per day.
Some accidents happen when residents try to siphon off oil or petrol from pipelines or when tanker drivers have accidents on the country's ill-maintained roads.

NNPC said that the temporary shutdown of the petroleum products pipeline would not affect the normal supply of products to the Lagos and surrounding towns.