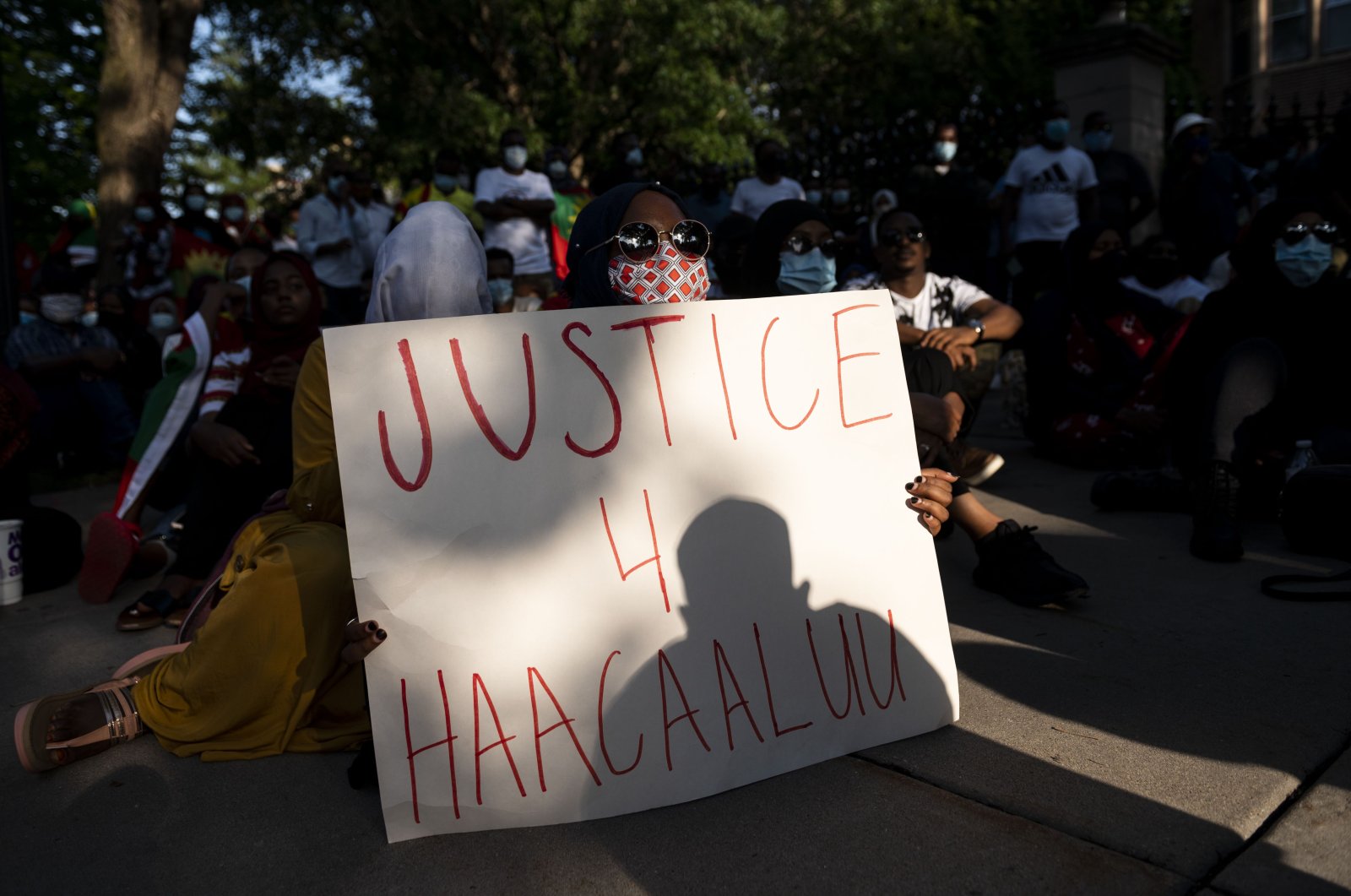 People gather during a protest of the death of musician and activist Haacaaluu Hundeessaa outside the Governor's Mansion in St. Paul, Minnesota, U.S., June 30, 2020. (AFP Photo)
by Agencies
Jul 01, 2020 11:24 am

At least 50 people were killed in protests in Ethiopia's Oromiya region during protests following the slaying of a popular singer, a regional spokesman said Wednesday.

Enraged youths burned tires in Ethiopia's capital and took to the streets of other cities, as unrest spread through the political heartland of Prime Minister Abiy Ahmed.

The dead included protesters and members of the security forces, said spokesman Getachew Balcha, adding that some businesses had also been set on fire.

"We were not prepared for this," he told Reuters.

Abiy called for calm following the killing of Haacaaluu Hundeessaa, an Oromo musician whose political songs were the soundtrack of a protest movement that helped bring Abiy to power two years ago. In a tweet, the prime minister offered condolences and promised an investigation.

Other pictures appeared to show demonstrators pulling down and beheading a statue of former emperor Haile Selassie in the Oromo city of Harar. Reuters could not verify the authenticity of the pictures or video.

A TV station owned by a prominent Oromo opponent of Abiy, media tycoon Jawar Mohammed, said police had arrested Jawar after his bodyguards refused to disarm. Bekele Gerba, a leader of an opposition Oromo political party, was also arrested, the station said.

The station was forced to broadcast by satellite from the U.S. state of Minnesota after police raided its headquarters and detained its staff, it said.

"They did not just kill Hachalu (Haacaaluu). They shot at the heart of the Oromo Nation, once again !!... You can kill us, all of us, you can never ever stop us!! NEVER !!" Jawar, whose supporters have been involved in violent clashes with the police in the past, posted on his Facebook page before his arrest.

Addis Ababa city police commissioner Getu Argaw told state media late Monday that Haacaaluu had been shot dead at around 9:30 p.m. Some suspects had been detained, he said, giving no further details.

On Tuesday morning, the normally busy streets of Addis Ababa were eerily empty as protesters lit fires and chanted slogans.

Telecoms across Ethiopia were shut down, a step the authorities have taken in the past at times of political unrest.

NetBlocks, an organization that tracks global internet shutdowns, said that there was a "near-total internet shutdown” from about 9 a.m. local time. The shutdown was the most severe in a year, NetBlocks said. By noon, phone calls were also no longer going through.

Haacaaluu, a former political prisoner, rose to prominence during anti-government protests which began in the Oromo heartland and led to Abiy taking power in 2018, ending decades of dominance of the ruling coalition by ethnic Tigray leaders.

"Today’s ruling party and the prime minister would not have come to power if it were not for the immense contribution that Haacaaluu made to the Oromo protest movement," said Awol Allo, a senior lecturer of law at Keele University in England who has written about Haacaaluu's music.

Abiy's rule ushered in greater political and economic freedoms in what had long been one of the continent's most repressive states, and the prime minister won the 2019 Nobel Peace Prize for ending the conflict with neighboring Eritrea.

But the rise in political activism has also led to an increase in unrest in a country made up of more than 80 ethnic groups. Abiy's rule has been frequently challenged by local powerbrokers demanding more access to land, power and resources.

His determination to forge a pan-Ethiopian politics have sparked a backlash from some elements of his own Oromo powerbase, spearheaded by media magnate Jawar.

Clashes between police and Jawar's supporters killed at least 78 people in October last year after the government tried to withdraw Jawar's security detail.

Elections due this year have been postponed until next year due to COVID-19 in a deal agreed with the major opposition parties.