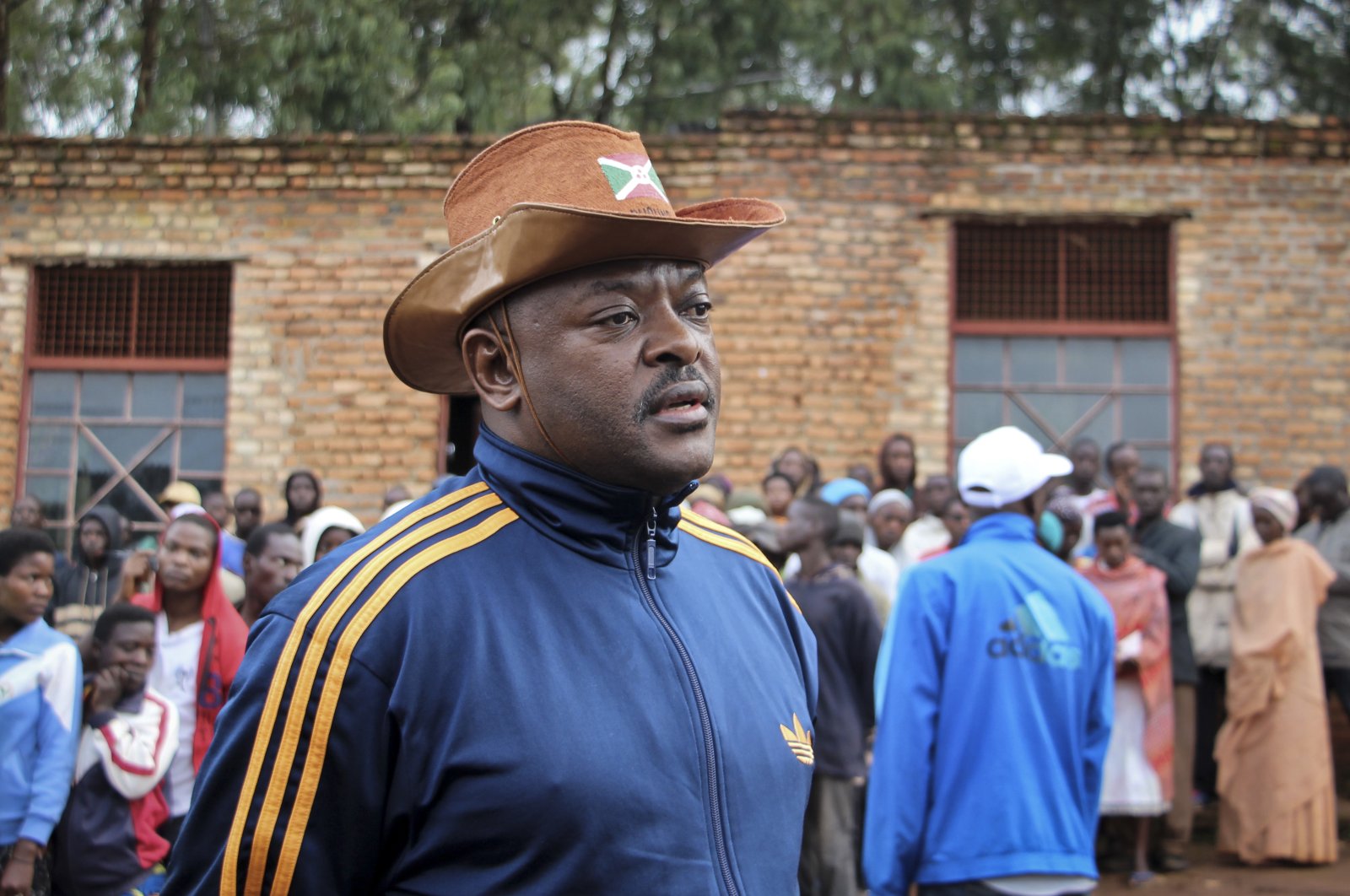 In this Thursday, May 17, 2018 file photo, Burundi's President Pierre Nkurunziza speaks to the media after casting his vote in the constitutional referendum in Buye, northern Burundi. (AP Photo)
by ASSOCIATED PRESS
Jun 09, 2020 7:26 pm

Burundi's President Pierre Nkurunziza has died of a heart attack at age 56, the government announced Tuesday, ending a 15-year-rule marked by deadly political violence and a historic withdrawal from the International Criminal Court.

The statement posted on social media said the president was admitted to a hospital overnight Saturday after not feeling well. He appeared better Sunday but "to very great surprise" his health abruptly worsened Monday morning and several hours of effort failed to revive him.

Burundi’s government has declared a week of mourning.

Nkurunziza's death comes weeks before president-elect ruling party candidate Evariste Ndayishimiye was expected to be sworn in after winning the May election. It was not immediately clear what the government's steps will be and a spokesman was not available for comment.

"According to Burundi’s constitution, when a president dies in the office before handing over power, the speaker of parliament takes over and organizes a fresh election. But I think the leadership will ignore this requirement and go with Evariste Ndayishimiye," said David Gakunzi, a Burundian author.

Despite the government's statement, some in Burundi wondered whether Nkurunziza died of COVOD-19 instead. "When Nkurunziza’s wife was flown to Kenya suffering from COVID-19, many in Burundi suspected the president himself was sick," said Justin Nyabenda, a resident in Bujumbura. He was referring to reports in Kenyan media that Nkurunziza's wife, Denise, was hospitalized in Nairobi for COVID-19 in late May.

Burundi's government has downplayed the virus and held the election and large campaign rallies despite the threat. Authorities kicked out the World Health Organization’s (WHO) top official in the country just days before the election after the WHO raised concerns about crowded rallies. The country has 83 virus cases.

Nkurunziza took office in 2005, chosen by lawmakers to lead the East African nation after the 1993-2005 civil war killed about 300,000 people. He and Ndayishimiye fought alongside each other as rebels in the conflict.

The peace process known as the Arusha Accords specified that a president’s term can be renewed only once. But Nkurunziza, who won a second term in 2010, announced he was eligible for a third term in 2015 because he had not been chosen the first time by universal suffrage.

The deadly turmoil that followed badly damaged ties with the international community and Burundi became the first country to leave the ICC after it started investigating allegations of state-sponsored crimes including murder, rape and torture.

The United Nations human rights office reported more than 300 extrajudicial killings and was later kicked out of the country after outgoing U.N. rights chief Zeid Ra’ad al-Hussein called Burundi one of the "most prolific slaughterhouses of humans in recent times."

Burundi’s government has denied allegations it targets its people, calling them malicious propaganda by dissidents.

"Many Burundians will remember Nkurunziza as a president who left behind a divided country," said author Gakunzi. "When he came into power after the Arusha agreement, citizens expected peace and prosperity. However, his greed for power in 2015 divided the country and sent many to live in exile."

Many Burundians were surprised when the president announced in 2018 that he was serving his last term. Many thought he would continue to wield power behind the scenes. The opposition leader who lost the May election, Agathon Rwasa, said his supporters were harassed ahead of the vote and arrested by the scores on election day. His court challenge to the vote alleging fraud was rejected.

The government had approved legislation meant to bestow upon Nkurunziza the title of "paramount leader" once he stepped down.

Nkurunziza "leaves behind a legacy of ruthless repression," said Lewis Mudge, Central Africa director at Human Rights Watch. "He ruled through fear to erect a system synonymous with the worst human rights abuses: extrajudicial killings, torture, disappearances and the systematic crushing of dissent."

Burundi must investigate the crimes, Mudge said. "As long as these abuses go unpunished, this dark legacy will hang over Burundi for many years to come."