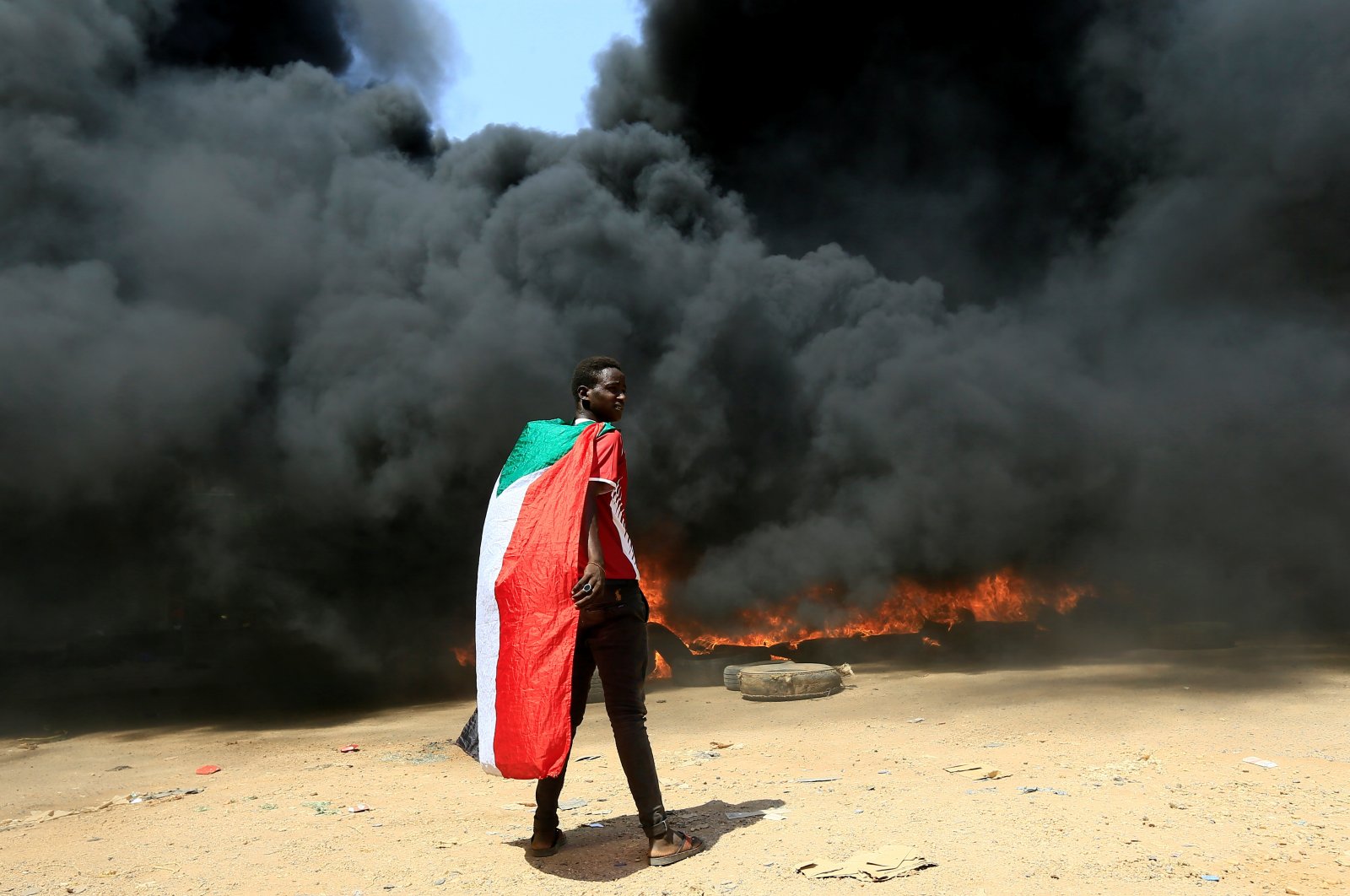 A person wearing a Sudanese flag stands in front of a burning pile of tires during a protest against the prospect of military rule in Khartoum, Sudan, Oct. 21, 2021. (REUTERS Photo)
by Daily Sabah with AP Oct 21, 2021 10:42 pm
RECOMMENDED

Huge crowds rallied in the Sudanese capital Khartoum on Thursday, demanding a fully civilian government as the relationship between military generals and pro-democracy groups deteriorated over the country’s future.

As crowds swelled in separate marches in Khartoum, protest organizers said that security forces had attacked a group of demonstrators near the parliamentary headquarters. A police statement, however, said that some demonstrators had departed from the otherwise peaceful march and attacked the security forces, leaving policemen with injuries, including two with gunshot wounds.

Dr. Mohamed al-Haj, who works at a nearby hospital in the area of Omdurman, said he knew of two dozen protesters who were being treated there, two of them with gunshot wounds.

Sudan has been ruled by an interim civilian-military government since 2019. The military ousted longtime autocrat Omar al-Bashir in April that year, following four months of mass protests against his rule. With al-Bashir toppled, the ruling generals agreed to share power with civilians representing the protest movement.

The aftermath has been volatile. Thursday's rallies come after a rival group gathered in support of the military leaders.

The Sudanese Professionals’ Association, which had called for the large rallies nationwide, said in a statement Thursday evening that security forces had attacked protesters near the country's parliamentary headquarters. They did not elaborate on the nature of the attack. The statement told protesters to remain peaceful, but not to retreat from the streets until there was a handover of power.

“Let's mark with our protests a new wave of popular uprising that will pave the way for a fully civilian and democratic rule,” read an earlier statement by the group, which spearheaded the uprising that kicked off in December 2018 and culminated in al-Bashir’s ouster.

Thousands of men and women marched in the capital Thursday, waving the Sudanese flag and chanting: "We are free! We are revolutionaries! We will carry on with our journey!”

Tensions between the civilians and generals in the transitional government have increased since Sudan’s interim authorities said they foiled a coup attempt within the military last month. Officials blamed al-Bashir loyalists for the move. The announcement also aroused fears among civilians that the military may eventually hijack the country's transition to a civilian democratic rule.

Military leaders have also signaled a change in direction. Gen. Abdel-Fattah Burhan, head of the ruling Sovereign Council, said that dissolving the government of Prime Minister Abdullah Hamdok could resolve the ongoing political crisis. Hamdok responded last week by addressing the public in a televised speech where he laid out a series of measures that he said would help speed the handover to a completely elected and civilian government. They included repeated exhortations for groups of differing opinions to work together, and for the country’s transitional constitution and judicial bodies to be respected.

In a video released by his office late Thursday, Hamdok praised the demonstrators' peaceful movement and thanked the police who had secured the marches.

Thursday’s rallies come days after a rival protest in support of the ruling generals.

On Saturday, thousands of Sudanese took to the streets of Khartoum to demand the dismantling of Hamdok's government and the establishment of military rule. Since then, hundreds of them have been camping outside the Republican Palace, the seat of the Sovereign Council.

In a tweet on Wednesday, U.S. Secretary of State Antony Blinken called on the Sudanese to exercise their right to assembly peacefully and without violence.

Thursday's rallies also coincide with the 57th anniversary of the Sudanese uprising that ended the military rule of Gen. Ibrahim Abboud in 1964 and paved the way for a constitutional government.