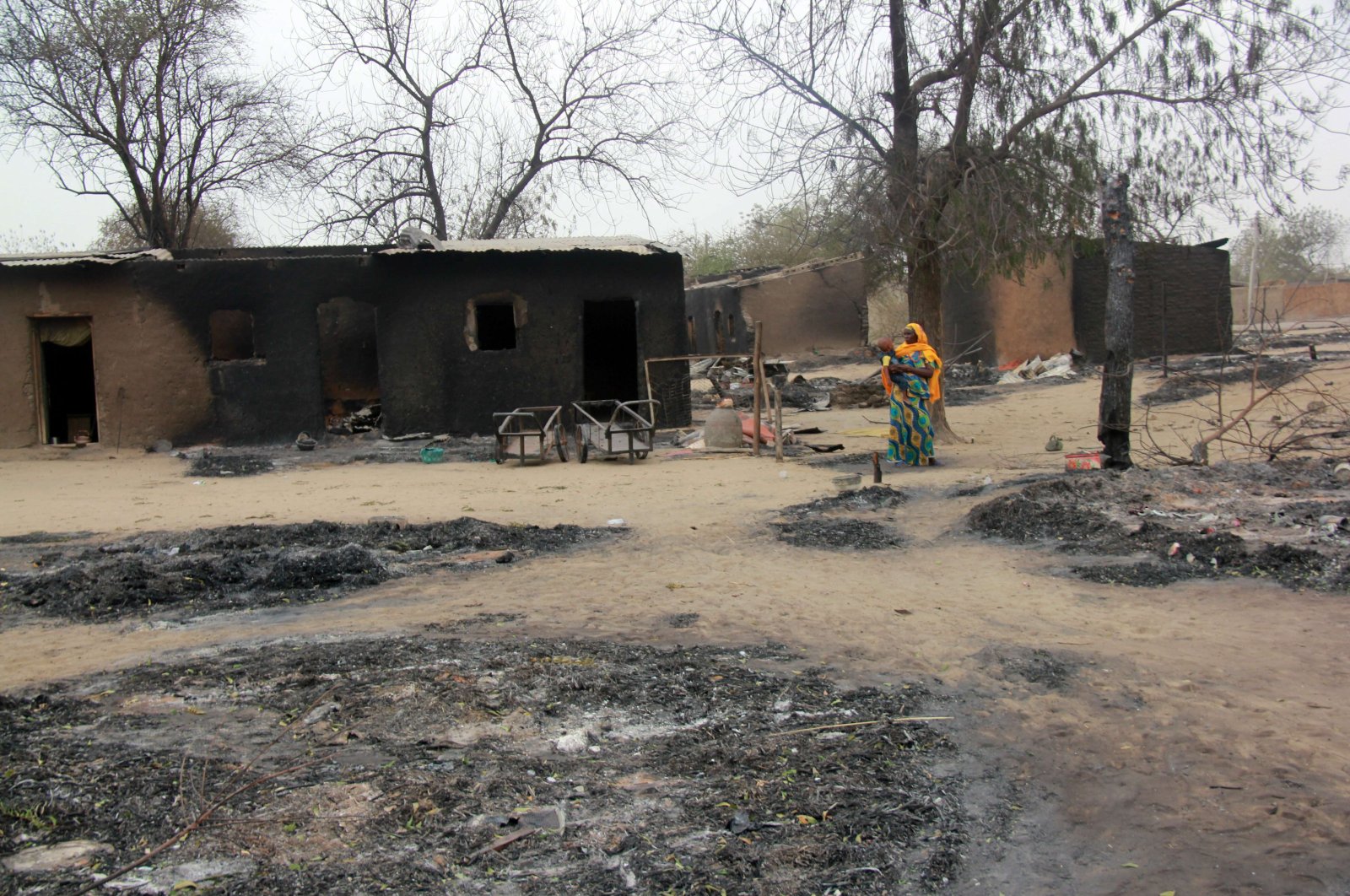 This file photo shows a woman walking past burnt houses after a two-day clash between officers of the Joint Task Force and members of Boko Haram, in Baga, Borno state, Nigeria, April 21, 2013. (AFP Photo)
by Agencies Jun 15, 2020 12:16 am
RECOMMENDED

Militants affiliated with the Daesh terrorist group killed dozens of people in the latest of a flurry of bloody attacks in northeast Nigeria, local sources said Sunday.

Inhabitants of remote Goni Usmanti village told Agence France-Presse (AFP) that fighters gunned down 38 people in a raid on Saturday and set a truck ablaze, killing an unknown number of passengers.

Security sources and residents said at least 15 people, including nine soldiers, died hours later in a second attack by the terrorists on the town of Monguno, 60 kilometers (40 miles) away.

The killings are the latest in a spike of assaults by fighters believed to be from Daesh's West African branch after they massacred 81 people at a village in the area on Tuesday.

"The insurgents killed 38 people, including six vigilantes who put up a fight before they were overpowered," local self-defense group leader Babakura Kolo said.

Resident Grema Nuwaisu gave the same toll and said the fighters had also opened fire on a truck loaded with traders, burning the vehicle and those inside.

"We don't know how many people were on the lorry which was full," Nuwaisu said.

"It was completely burnt, making it difficult to identify bodies. Only two passengers jumped off the truck and escaped," he said.

The same group of terrorists was then believed to have carried out an attack on the strategic garrison town of Monguno several hours later.

Security sources and residents on Sunday raised the death toll from that assault from six to 15 as more bodies were discovered.

"The number of those killed is now 15, including nine soldiers, a vigilante and five civilians," said government-backed militia member Bukar Ari.

He said several residents wounded by "stray bullets and shrapnel" were being treated at a clinic run by an international charity.

Monguno – home to a key army base and over 150,000 people displaced by the region's decadelong insurgency – has been repeatedly targeted by terrorists.

Residents said the assailants torched a police station and government buildings before military jets launched airstrikes against them.

Turkey on Sunday condemned the deadly terror attacks in Nigeria.

"We are saddened by the terrorist attacks that took place in Borno State of Nigeria, in the evening of June 13th, claiming many military and civilian lives and leaving several injured," the Foreign Ministry said in a statement.

"We condemn these heinous terrorist attacks. We wish Allah's mercy upon those who lost their lives, speedy recovery to injured and offer our sincere condolences to the people and Government of Nigeria," the statement added.

The United Nations said in a statement it was "appalled" by the two attacks in which "many civilians were killed, including a four-year old girl" and at least 37 wounded.

It said a major humanitarian facility in Monguno holding 50 aid workers sustained only light damage but appeared to have been "directly targeted and an unexploded projectile was found at the gate."

Vehicles and buildings belonging the U.N. and international aid groups outside the compound were set on fire, it said.

"I am relieved all staff are safe and secure, but I am shocked by the intensity of this attack," said Edward Kallon, U.N. humanitarian coordinator in Nigeria.

"It is the latest of too many clashes affecting civilians, humanitarian actors and the assistance we provide," he said.

The Nigerian military wrote on Twitter Sunday that the army and air force had "successfully repelled" the attack on Monguno and killed 20 militants.

It made no mention of any casualties among soldiers and civilians or of the attack on Goni Usmanti.

The 10-year conflict in northeast Nigeria has killed at least 36,000 people and forced 2 million from their homes.

The Nigerian authorities have repeatedly claimed the insurgency has been largely defeated.

The West African Daesh affiliate split from the Boko Haram terrorist group in 2016 and pledged allegiance to Daesh.