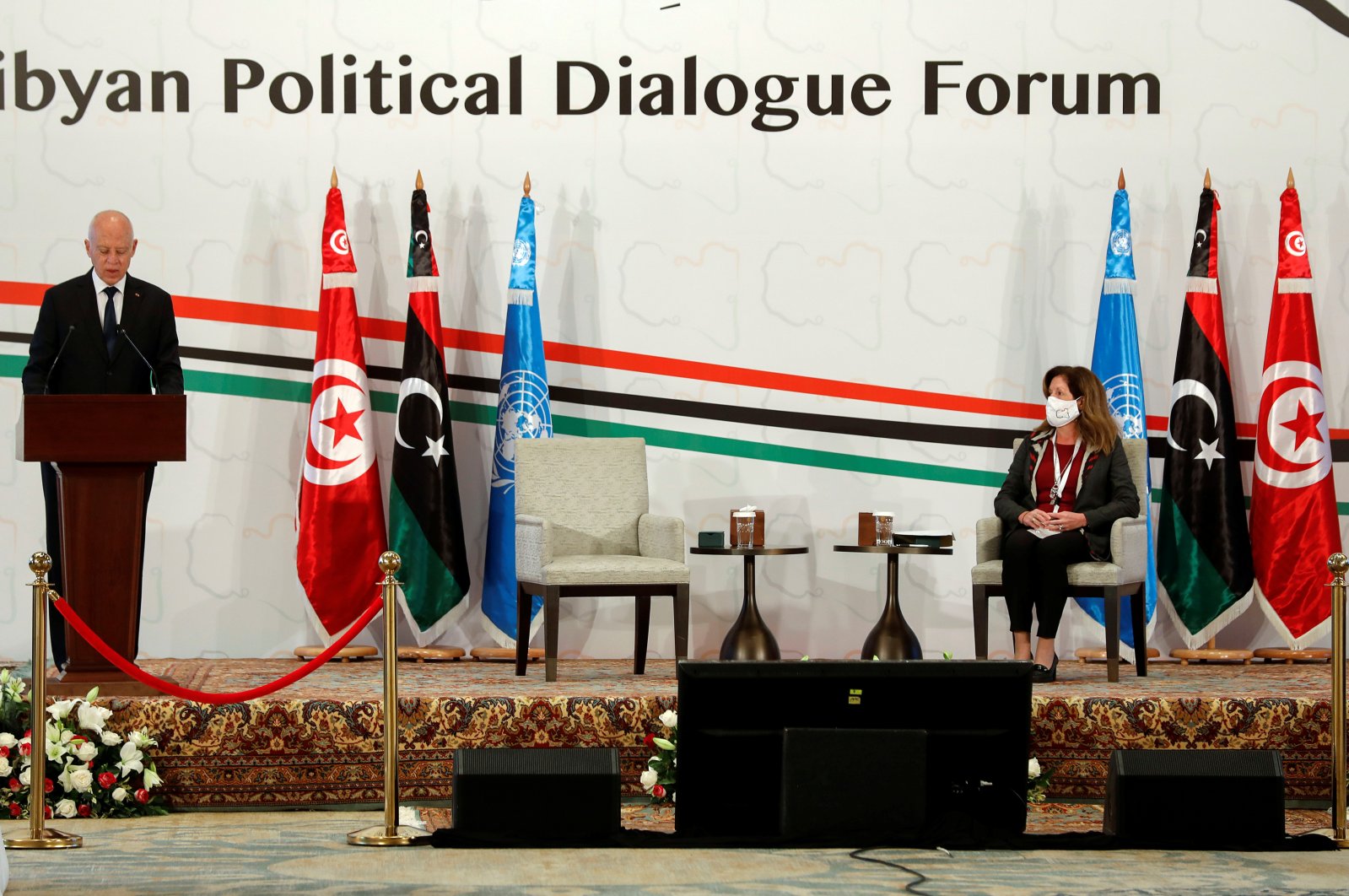 U.N.-brokered direct political talks between Libya's rival sides kicked off in neighboring Tunisia on Monday, with a goal of drawing a roadmap to presidential and parliamentary elections.

Stephanie Williams, the head of the U.N. Support Mission in Libya, opened the meetings of the Libyan Political Dialogue Forum (LPDF) in the capital Tunis. The forum conducted its first meeting online late last month.

"We are standing on the verge of a new Libya after years of division, destruction and multiple crises," Williams told the opening ceremony, which was attended by Tunisian President Kais Saied.

Saied for his part, said the forum was a "historic by all measures" and that the Libyan people are one despite talks of west and east. "The solution is for the Libyan people to regain their full sovereignty," he added.

"We are moving forward with confident steps in the multiple paths overseen by the United Nations, depending on the determination of the Libyan people, their will and their right to protect their nation and sovereignty and their country's wealth," she added.

She said the road leading up to the forum was neither easy nor smooth.

The LPDF was originally established after an international conference on Libya earlier on Jan. 19.

Williams had voiced optimism on Sunday ahead of talks aimed at preparing for elections in the war-torn North African country.

The U.N.-led dialogue follows months of relative calm in Libya, which tumbled into chaos following the toppling of longtime ruler Moammar Gadhafi in 2011.

Last month the two main sides in the complex conflict signed a landmark cease-fire agreement, opening the way to a resumption of economically vital oil production and progress on efforts to end years of political deadlock.

"This is a unique opportunity," U.N. acting envoy to Libya Stephanie Williams told journalists in Tunis. "There has been significant progress on the ground."

The latest political talks, part of a multitrack process also involving military and economic negotiations, aim to unify the country under a single executive and pave the way for national elections.

"Elections need to be the ultimate objective here," she added, calling for "a clear road map" toward polls as soon as possible.

Libya is divided between the Government of National Accord (GNA) in the capital Tripoli and a separate administration in the east, supported by putschist Gen. Khalifa Haftar.

Haftar's Russian and Emirati-backed forces launched an offensive in April 2019 to seize the capital, abruptly halting a previously planned round of U.N.-led talks.

But after swift advances, Haftar's forces ran into a stalemate on the outskirts of Tripoli.

That lasted until June when GNA forces with Turkish support launched a counteroffensive that pushed Haftar's troops back to the central coastal city of Sirte.

The fighting left hundreds dead and displaced tens of thousands.

But Williams cited "progress on the ground in terms of confidence measures that have accompanied the military dialogue," as well as the resumption of domestic flights to the country's south and an uptick in oil production.

The country’s oil production was under 100,000 barrels in September.

The 75 people taking part in the dialogue were selected by the U.N. to represent the country's political, military and social makeup.

They joined on the condition that they renounce any claim to take part in the resulting executive branch, which will face the task of dealing with a bleak financial crisis and the coronavirus pandemic, which has left over 900 people dead in Libya and severely stretched the country's struggling health services.

"The status quo cannot continue," Williams said, urging participants "to come with a spirit of compromise to be willing to make concessions for the sake of Libya."