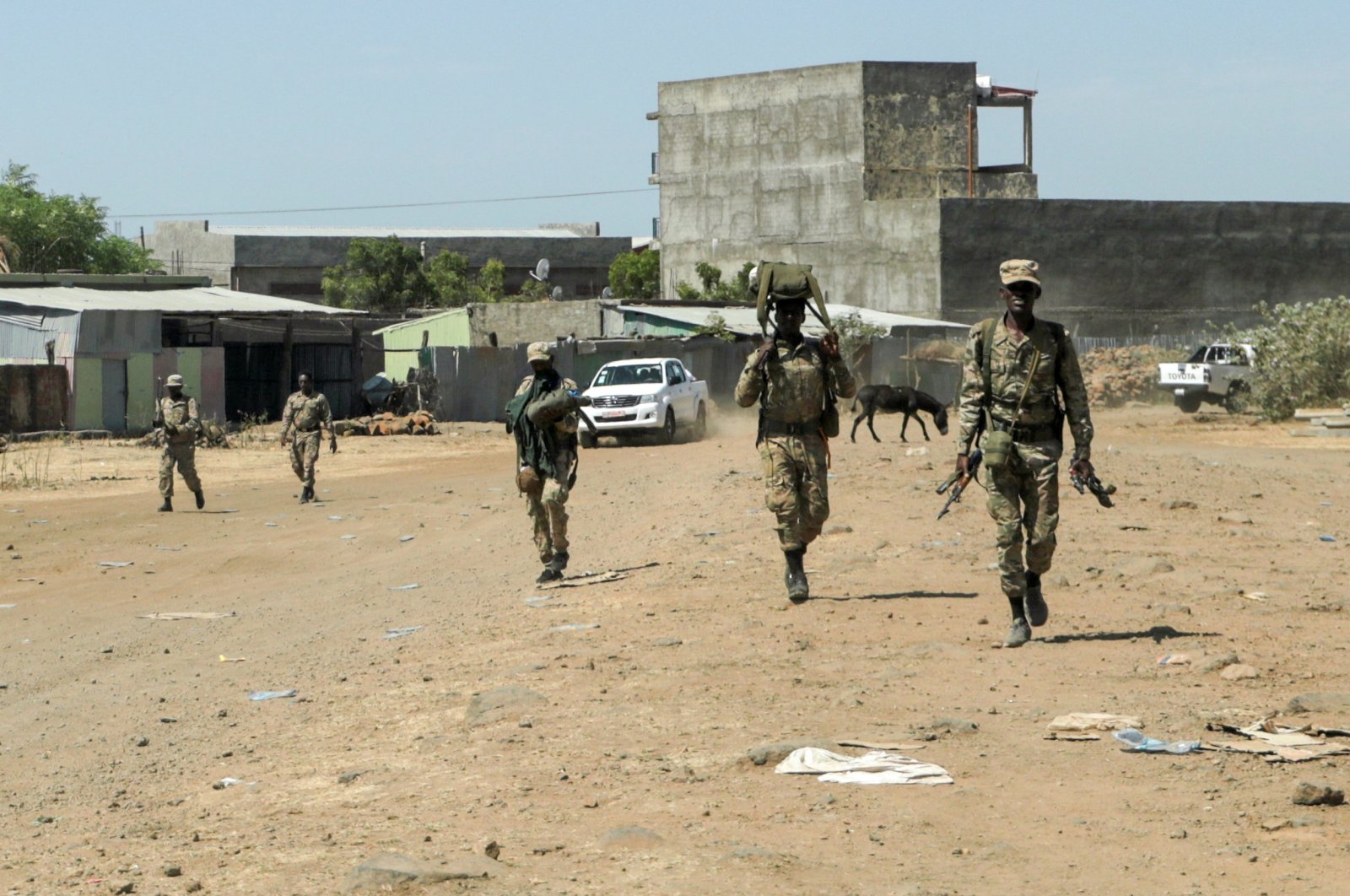 Members of the Amhara Special Force return to the Dansha Mechanized 5th division Military base after fighting against the Tigray People's Liberation Front (TPLF), Danasha, Amhara region near a border with Tigray, Nov. 9, 2020. (REUTERS Photo)
by Agencies Nov 10, 2020 10:44 am
RECOMMENDED

The Ethiopian military has seized the airport in the town of Humera, state-affiliated Fana TV reported Tuesday, amid a nearly week-old conflict in the northern Tigray region.

"The Ethiopian National Defense Force has fully captured Humera Airport amid the continuation of government's military response against Tigray People's Liberation Front (TPLF) rebel group," Fana reported, referring to the group that leads the government in the Tigray region. Humera is located in the far northwest of the country, near the borders with Sudan and Ethiopia.

Clashes have killed nearly 500 Tigrayan forces, while the Ethiopian army has also lost hundreds of troops defending its base so far, while at least 30 armed Ethiopian troops and "large numbers" of refugees fleeing the fighting in Ethiopia’s northern Tigray region have crossed the border into Sudan, the state-run SUNA news agency reported.

As the African Union urged an immediate cease-fire, Nobel Peace Prize-winning Prime Minister Abiy Ahmed again vowed that his military will bring a speedy end to the fighting in the heavily armed Tigray region and the removal of its leadership, which his government regards as illegal. With the region almost completely cut off, it remained difficult to confirm either side's claims. Each blames the other for sparking the conflict.

Sudan, which has sent more than 6,000 troops to the border, has been under pressure from the international community to help make peace and from the Ethiopian government, which seeks to cut Tigray off from the outside world.

The troops from Ethiopia's Amhara region neighboring Tigray fled into Sudan’s Qadarif province Monday evening, the SUNA report said, citing witnesses. Local authorities have started to prepare a refugee camp for the fleeing Ethiopians, it said, while aid groups warn of a brewing humanitarian crisis affecting millions of people at the heart of the Horn of Africa region.

The Ethiopian troops turned themselves and their weapons in, and appealed for protection as fighting raged over the border, a Sudanese military official said on condition of anonymity because he was not authorized to brief reporters.

Prime Minister Abiy Ahmed last week launched a military campaign in the province, saying forces loyal to the leaders there had attacked a military base and attempted to steal equipment. Abiy accuses Tigray's leaders of undermining his democratic reforms. Government fighter jets have since been bombing targets in the region, which borders Sudan and Eritrea. Aid workers on Sunday reported heavy fighting in several parts of the region. Also on Sunday, Abiy named a new chief of the army, a new intelligence chief and a new federal police commissioner and foreign minister.