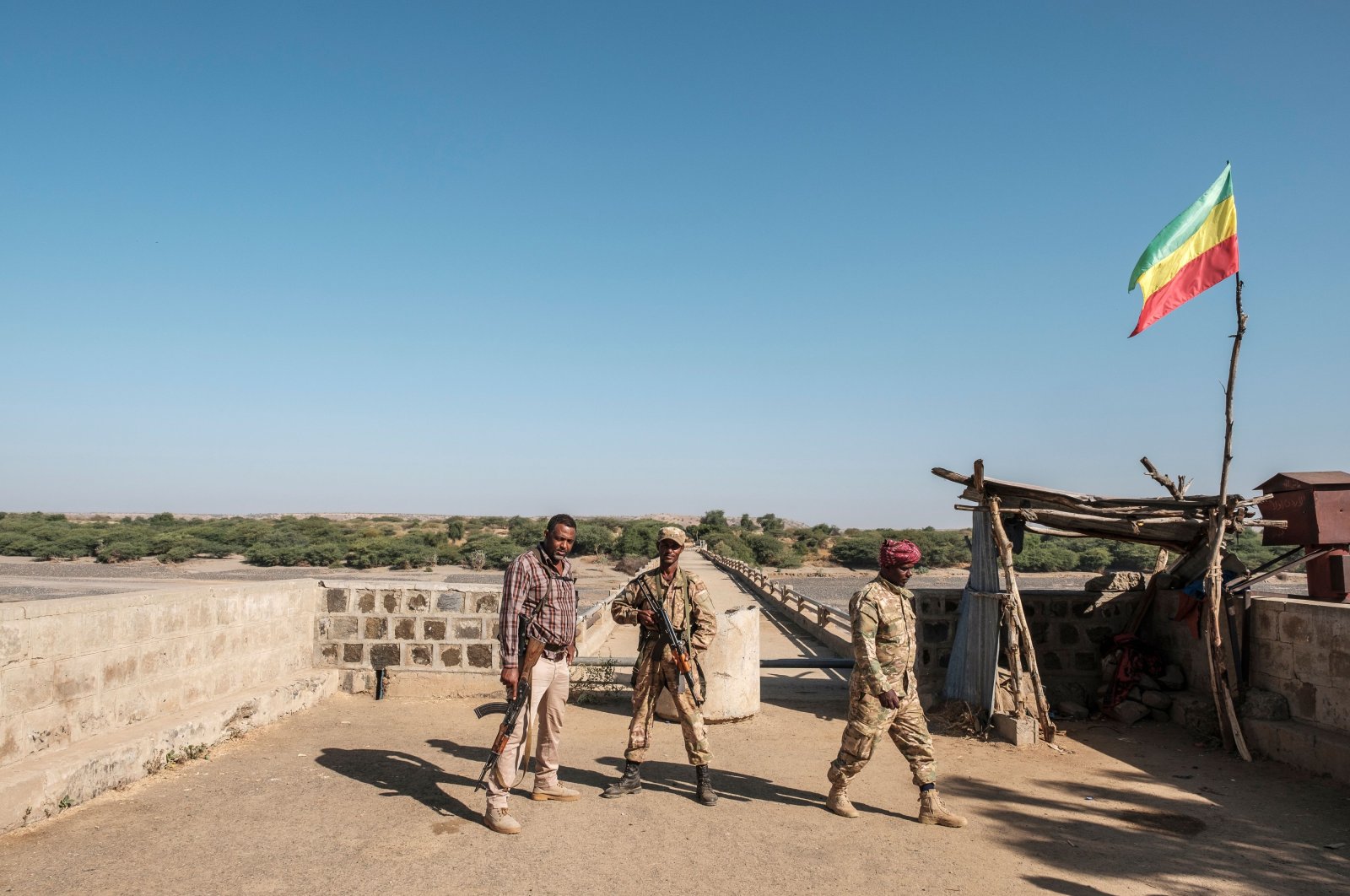 Two members of the Amhara Special Forces with a member of the Amhara militia (L) stand at the border crossing with Eritrea, Humera, Ethiopia, Nov. 22, 2020. (AFP Photo)
by Agencies Nov 25, 2020 12:32 pm
RECOMMENDED

Ethiopia's prime minister is rejecting growing international consensus for dialogue and a halt to deadly fighting in the Tigray region as "interference," saying his country will handle the conflict on its own.

"We respectfully urge the international community to refrain from any unwelcome and unlawful acts of interference," the statement from Prime Minister Abiy Ahmed's office said Wednesday, as quoted by the Associated Press (AP), as government forces encircled the Tigray capital, Mekele, with tanks. "The international community should stand by until the government of Ethiopia submits its requests for assistance to the community of nations."

Abiy, last year's Nobel Peace Prize winner, insists on calling the conflict a "law enforcement operation" while his ultimatum for Tigray People's Liberation Front (TPLF) leaders to surrender ends ahead of a final push to arrest them.

Abiy's government has warned Mekele's half-million residents to move away from the TPLF leaders or there will be "no mercy" – language that the United Nations human rights chief and others have warned could lead to "further violations of international humanitarian law."

Communications remain almost completely severed to the Tigray region of some 6 million people. It is not clear how many people in Mekele are aware of the warnings and the threat of artillery fire.

A news agency in Ethiopia's Amhara region said on Wednesday that more than 10,000 Tigrayan troops had been "destroyed" during a three-week conflict raging in the mountainous north.

The report by the regional government-run AMMA agency in Amhara, where authorities back Prime Minister Abiy Ahmed's federal forces, could not be verified and nor was there any immediate response from the Tigray People's Liberation Front (TPLF), according to Reuters.

The TPLF dominated Ethiopia's government for more than a quarter-century but was sidelined after Abiy took office in 2018 and sought to centralize power in a country long ruled along ethnic lines. The TPLF opted out when Abiy dissolved the ruling coalition, then infuriated the federal government by holding an election in September after national elections were postponed by COVID-19. Each side now regards the other as illegal.

The international community has urgently called for communications to be restored to the Tigray region so warring sides' claims can be investigated, and so food and other desperately needed supplies can be sent as hunger grows.

The U.N. says it has been unable to send supplies into Tigray since the fighting began on Nov. 4, when Abiy accused the TPLF of attacking a military base. Hundreds, perhaps thousands, of people have been killed in three weeks of fighting. More than 40,000 refugees have fled into Sudan. And nearly 100,000 Eritrean refugees at camps in northern Tigray have come close to the line of fire.