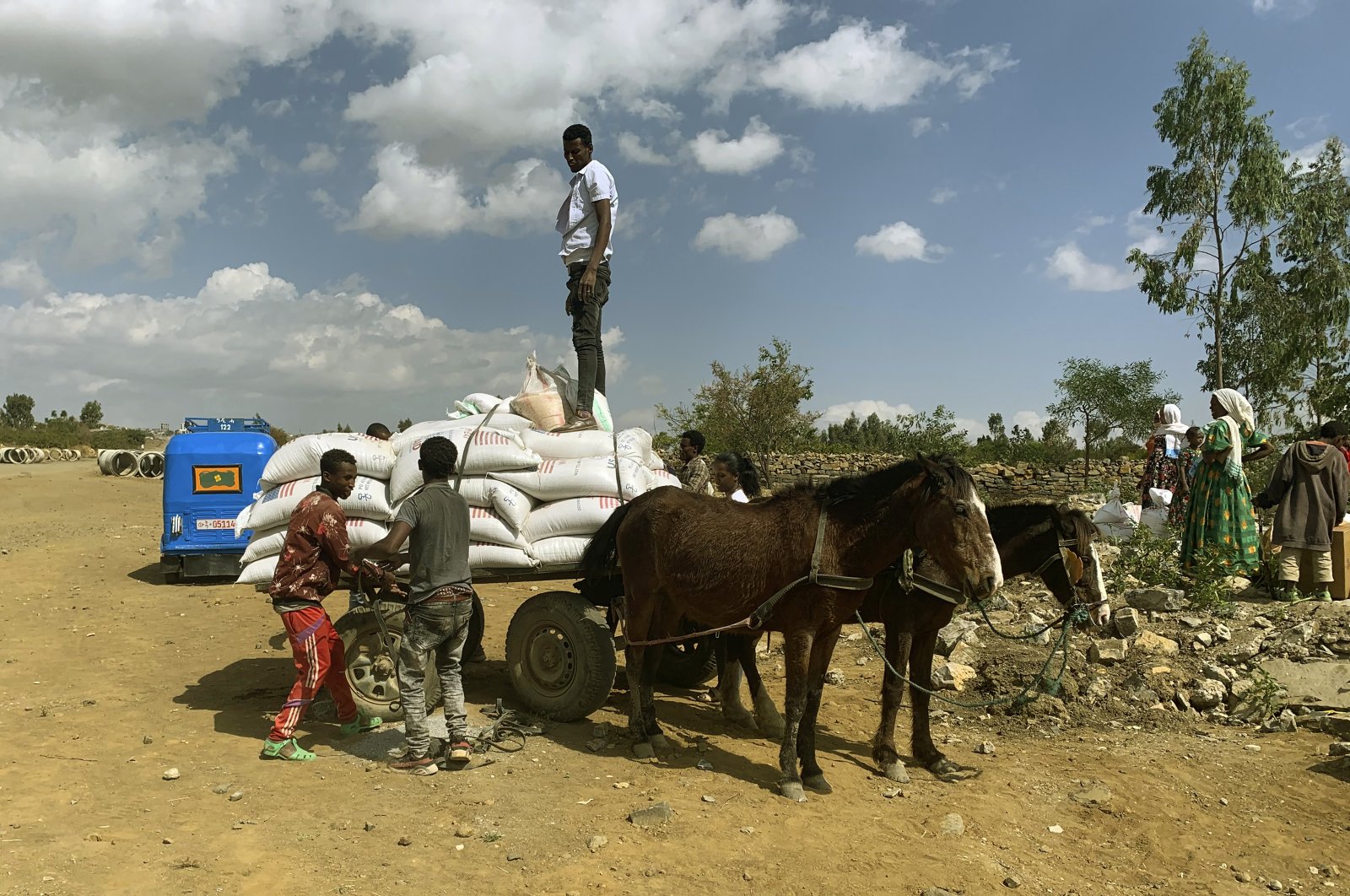 People affected by the conflict in Tigray load food aid provided by humanitarian agencies onto a donkey cart to be transported to their home, outside Mekele, Ethiopia, Jan. 12, 2021. (AP Photo)
by Associated Press Jan 17, 2021 11:30 am
RECOMMENDED

From "emaciated" refugees to crops burned on the brink of harvest, starvation threatens the survivors of more than two months of fighting in Ethiopia's Tigray region.

The first humanitarian workers to arrive after pleading with the Ethiopian government for access describe weakened children dying from diarrhea after drinking from rivers. Shops were looted or depleted weeks ago. A local official told a Jan. 1 crisis meeting of government and aid workers that hungry people had asked for "a single biscuit."

More than 4.5 million people, nearly the region's entire population, need emergency food, participants say. At their next meeting on Jan. 8, a Tigray administrator warned that without aid, "hundreds of thousands might starve to death" and some already had, according to minutes obtained by The Associated Press (AP).

"There is an extreme urgent need – I don't know what more words in English to use – to rapidly scale up the humanitarian response because the population is dying every day as we speak," Mari Carmen Vinoles, head of the emergency unit for Doctors Without Borders, told the AP.

But pockets of fighting, resistance from some officials and sheer destruction stand in the way of a massive food delivery effort. To send 15-kilogram (33-pound) rations to 4.5 million people would require more than 2,000 trucks, the meeting's minutes said, while some local responders are reduced to getting around on foot.

The specter of hunger is sensitive in Ethiopia, which transformed into one of the world's fastest-growing economies in the decades since images of starvation there in the 1980s led to a global outcry. Drought, conflict and government denial contributed to the famine, which swept through Tigray and killed an estimated 1 million people.

The largely agricultural Tigray region of about 5 million people already had a food security problem amid a locust outbreak when Prime Minister Abiy Ahmed on Nov. 4 announced fighting between his forces and those of the defiant regional government. Tigray leaders dominated Ethiopia for almost three decades but were sidelined after Abiy introduced reforms that won him the Nobel Peace Prize in 2019.

Thousands of people have been killed in the conflict. More than 50,000 have fled into Sudan, where one doctor has said newer arrivals show signs of starvation. Others shelter in rugged terrain. A woman who recently left Tigray described sleeping in caves with people who brought cattle, goats and the grain they had managed to harvest.

"It is a daily reality to hear people dying with the fighting consequences, lack of food," a letter by the Catholic bishop of Adigrat said this month.

Hospitals and other health centers, crucial in treating malnutrition, have been destroyed. In markets, food is "not available or extremely limited," the United Nations says.

Though Ethiopia's prime minister declared victory in late November, its military and allied fighters remain active amid the presence of troops from neighboring Eritrea, a bitter enemy of the now-fugitive officials who once led the region.

Fear keeps many people from venturing out. Others flee. Tigray's new officials say more than 2 million people have been displaced, a number the U.S. government's Bureau for Humanitarian Assistance calls "staggering." The U.N. says the number of people reached with aid is "extremely low."

A senior Ethiopian government official, Redwan Hussein, did not respond to a request for comment on his Tigray colleagues' warning of starvation.

In the northern Shire area near Eritrea, which has seen some of the worst fightings, up to 10% of the children whose arms were measured met the diagnostic criteria for severe acute malnutrition, with scores of children affected, a U.N. source said. Sharing the concern of many humanitarian workers about jeopardizing access, the source spoke on the condition of anonymity.

Near Shire town are camps housing nearly 100,000 refugees who have fled over the years from Eritrea. Some who have walked into town "are emaciated, begging for aid that is not available," U.N. High Commissioner for Refugees Filippo Grandi said Thursday.

Food has been a target. Analyzing satellite imagery of the Shire area, a U.K.-based research group found two warehouse-style structures in the U.N. World Food Program compound at one refugee camp had been "very specifically destroyed." The DX Open Network could not tell by whom. It reported a new attack Saturday.

It's challenging to verify events in Tigray as communications links remain poor and almost no journalists are allowed.

In the towns of Adigrat, Adwa and Axum, "the level of civilian casualties is extremely high in the places we have been able to access," the Doctors Without Borders emergency official Vinoles said. She cited the fighting and lack of health care.

Hunger is "very concerning," she said, and even water is scarce: Just two of 21 wells still work in Adigrat, a city of more than 140,000, forcing many people to drink from the river. With sanitation suffering, disease follows.

"You go 10 kilometers (6 miles) from the city and it's a complete disaster," with no food, Vinoles said.

Humanitarian workers struggle to gauge the extent of need.

"Not being able to travel off main highways, it always poses the question of what's happening with people still off-limits," said Panos Navrozidis, Action Against Hunger's director in Ethiopia.

Before the conflict, Ethiopia's national disaster management body classified some Tigray woredas, or administrative areas, as priority one hotspots for food insecurity. If some already had high malnutrition numbers, "two-and-a-half months into the crisis, it's a safe assumption that thousands of children and mothers are in immediate need," Navrozidis said.

The Famine Early Warning Systems Network, funded and managed by the U.S., says parts of central and eastern Tigray are likely in Emergency Phase 4, a step below famine.

The next few months are critical, John Shumlansky, the Catholic Relief Services representative in Ethiopia, said. His group so far has given up to 70,000 people in Tigray a three-month food supply, he said.

Asked whether combatants use hunger as a weapon, one concern among aid workers, Shumlansky dismissed it by Ethiopian defense forces and police. With others, he didn't know.

"I don't think they have food either, though," he said.