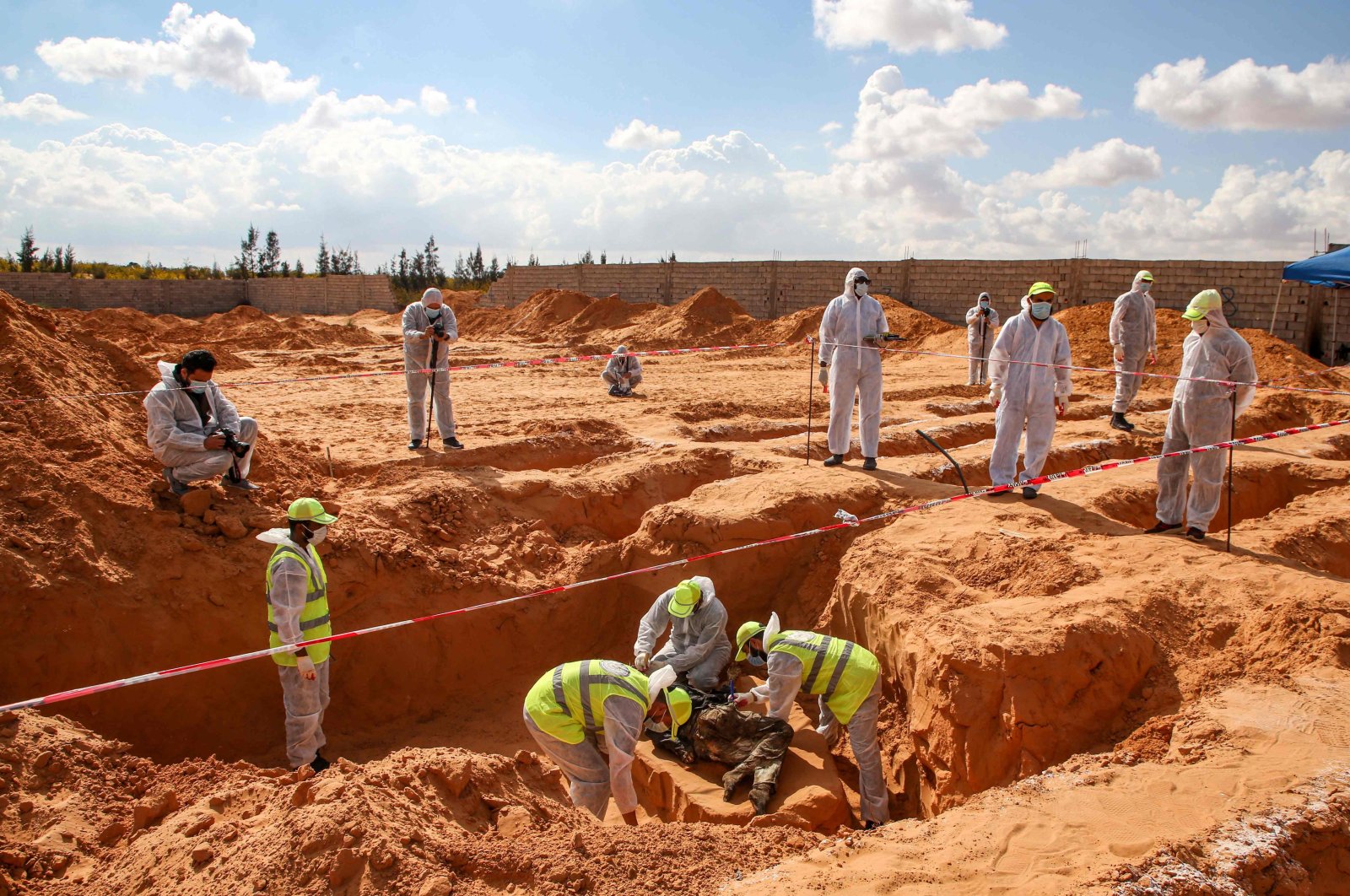 Members of a public body, which is backed by the UN-recognized Government of National Accord (GNA), unearth a body at a mass grave site in western Libya's Tarhuna region on Nov. 7, 2020. (AFP Photo)
by DAILY SABAH
Nov 11, 2020 10:34 am

The chief prosecutor of the International Criminal Court (ICC) reported Tuesday that a recently failed offensive by putschist Gen. Khalifa Haftar on the capital Tripoli involved a pattern of violence and the use of mines by retreating forces that harmed civilians, which is a war crime when used indiscriminately.

Fatou Bensouda said “credible information” on the increasing use of mines and improvised explosive devices (IEDs) against civilians was discovered when people who fled the fighting returned and “were either killed or injured because their homes were booby-trapped by such devices.” At least 49 people were killed by mines just between April and June, she told the U.N. Security Council (UNSC).

Bensouda said the latest information indicated the offensive by eastern forces under Haftar's command formed part of “a pattern of violence that involves the indiscriminate air strikes and shelling of civilian areas, arbitrary abduction, detention and torture of civilians, extrajudicial killings, enforced disappearances and pillaging of civilian property.”

She said this repeated a pattern of violence previously reported in places such as Haftar’s base in the main eastern city of Benghazi, the former Daesh stronghold of Derna that his forces recaptured in 2019 and Ajdabiya in the east, Marzuq in the south and the coastal city of Sirte that Haftar also controlled.

Bensouda said that since the discovery of mass graves in June in Tarhuna, which Haftar’s forces used as a base to launch their attack in April 2019 seeking to take the capital of Tripoli, over 100 bodies have been found, many blindfolded and with their hands tied. She said in the virtual briefing that her office is engaging with the U.N.-recognized government in Tripoli “in relation to these mass graves.”

Libya has been in turmoil since 2011 when a NATO-backed uprising toppled longtime ruler Moammar Gadhafi, who was later killed. The country has since split between Haftar’s forces in the east and the U.N.-backed Government of National Accord (GNA) in the west.

Haftar’s offensive, supported by Egypt, France the United Arab Emirates (UAE) and Russia, collapsed in June when militias backing the Tripoli government, with support from Turkey, gained the upper hand.

Amnesty International similarly stated that arms sales to the UAE could lead to further war crimes in Libya, following the U.S. announcement of new sales to the Gulf country. "The sale to the UAE is particularly worrying as Amnesty International has acquired extensive evidence that the UAE used armed drones in Libya, to break the long-standing U.N. arms embargo, by operating these drones on behalf of the Libyan Arab Armed Forces," it said on Monday, referring to Haftar's army. "Furthermore, the UAE has used these drones to target civilian houses and health facilities, including field hospitals and ambulances which is especially concerning as medics, medical transport and medical facilities, including those treating wounded or sick fighters, are specially protected under international humanitarian law," it added.

Bensouda also welcomed the Oct. 23 cease-fire agreement between the warring parties and urged its implementation to “usher in the much-awaited peace and stability for the people of Libya."

She also stressed the importance of justice and accountability.

“Victims of atrocity crimes in Libya must be reassured that notwithstanding any cease-fire or future agreement, individuals alleged to be responsible for serious crimes falling under the jurisdiction of the International Criminal Court (ICC) will be promptly arrested and surrendered to the court to face charges for their alleged crimes,” she said. Those include war crimes, crimes against humanity and genocide.

Bensouda called for intensified efforts to arrest al-Werfalli, “who as a commander of al-Saiqa Brigade, is alleged to have executed 43 civilians,” and Al-Tuhamy, who is reportedly living in Egypt and should be arrested by the government.