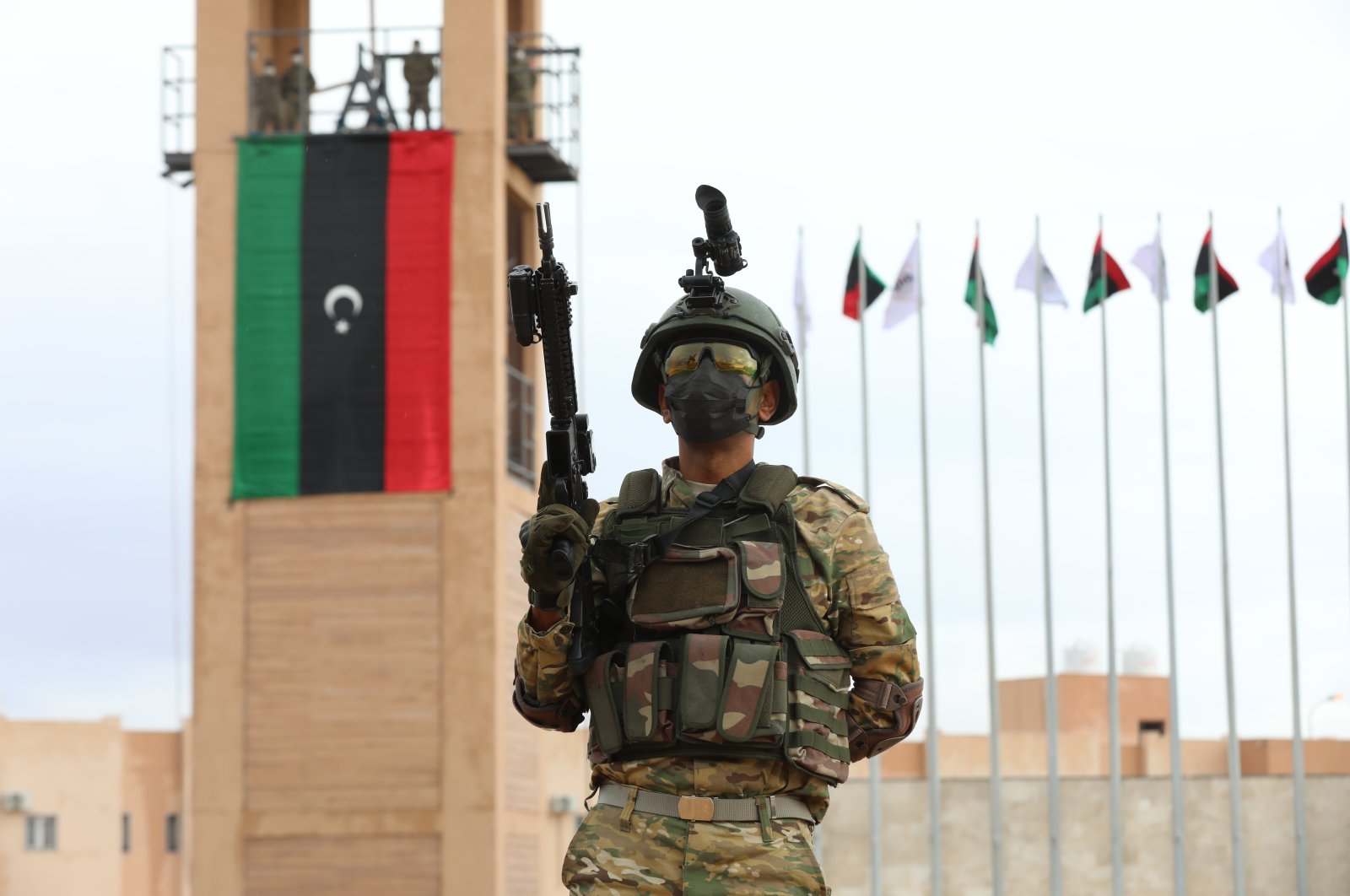 A Libyan soldier poses in front of the Libyan flag during a graduation ceremony concerning a military training program between Ankara and Tripoli, where the joint land training center Omar Mukhtar is located, on Nov. 21, 2020. (AA Photo)
by DAILY SABAH WITH AGENCIES Dec 05, 2020 10:38 pm
RECOMMENDED

Italy and Libya signed an agreement on Friday to collaborate in the defense areas of training, health care and demining activities.

It calls for identifying new ways to collaborate in medical health care, starting with the training of Libyan medical staff by members of Italy's field hospital in the northwestern Libyan city of Misrata.

It also commits to "a significant training plan for Libyan cadets and officers," and underlines Italy's willingness to collaborate on a demining center, according to Guerini, who visited Tripoli in August.

"Our commitment is primarily directed to support the process of stabilization, pacification and institutional reorganization we all hope for," he said in a statement.

"We agreed with Italy to cooperate in the fields of military training, experience sharing, support, development, maintenance and consultancy,” Al-Namroush said in a statement after the signing ceremony in Italy's capital Rome.

Italian colonization of Libya began in 1911 and lasted until 1943. Rome retains significant energy assets in the country and last year renewed a 2017 deal with the Libyan coastguard to block illegal migrants trying to leave from the country's coast to Italy.

Libya is in the midst of a protracted civil war since the ouster of Moammar Gadhafi in 2011, with Italy backing the U.N.-recognized government of Prime Minister Fayez Sarraj established in 2015. The Tripoli-based Government of National Accord (GNA) is also supported by Turkey and Qatar, while the opposing forces of putschist Gen. Khalifa Haftar based in the eastern cities of Tobruk and Benghazi are mainly backed by Egypt, Russia, France and the United Arab Emirates (UAE).

With major backing from Ankara, Tripoli has been battling Haftar's militias since April 2019 in a conflict that has claimed thousands of lives.

Earlier in the day, Italian Foreign Minister Luigi Di Maio visited Algeria, where he said Rome and Algiers agreed to diversify cooperation beyond the energy sector.

The two countries have developed a "solid partnership" in the economic and commercial sectors, Di Maio said, according to the official Algerian news agency APS.

He expressed hope that Italy could "diversify its areas of cooperation with Algeria, beyond the hydrocarbons sector," citing fields including infrastructure and technological innovation.

Energy plays an important role in economic relations between the two countries. Italian energy giant ENI has been present in Algeria since 1981. Together with state firm Sonatrach, it manages the Transmed gas pipeline that runs from Algeria to Italy via Tunisia.

Discussions also addressed the issue of immigration. Di Maio noted "the importance Italy places on the problem of illegal migration flows and its desire to reinforce cooperation with Algeria to confront this scourge," APS quoted him as saying.

Algerians accounted for two-thirds of the 13,400 "detections of illegal border crossings in the Western Mediterranean" in the first 10 months of this year, European Union border agency Frontex said in November.

Italy's Foreign Ministry said on Twitter that the situation in conflict-ridden Libya and the Sahel were also on the agenda, along with the fight against the coronavirus pandemic.

Later in the day, Di Maio also spoke with his Turkish counterpart Mevlüt Çavuşoğlu over the phone, ahead of a key EU summit on relations with Ankara. In addition to EU ties and the Cyprus question, the two ministers also discussed bilateral ties, a statement by the Turkish Foreign Ministry said.