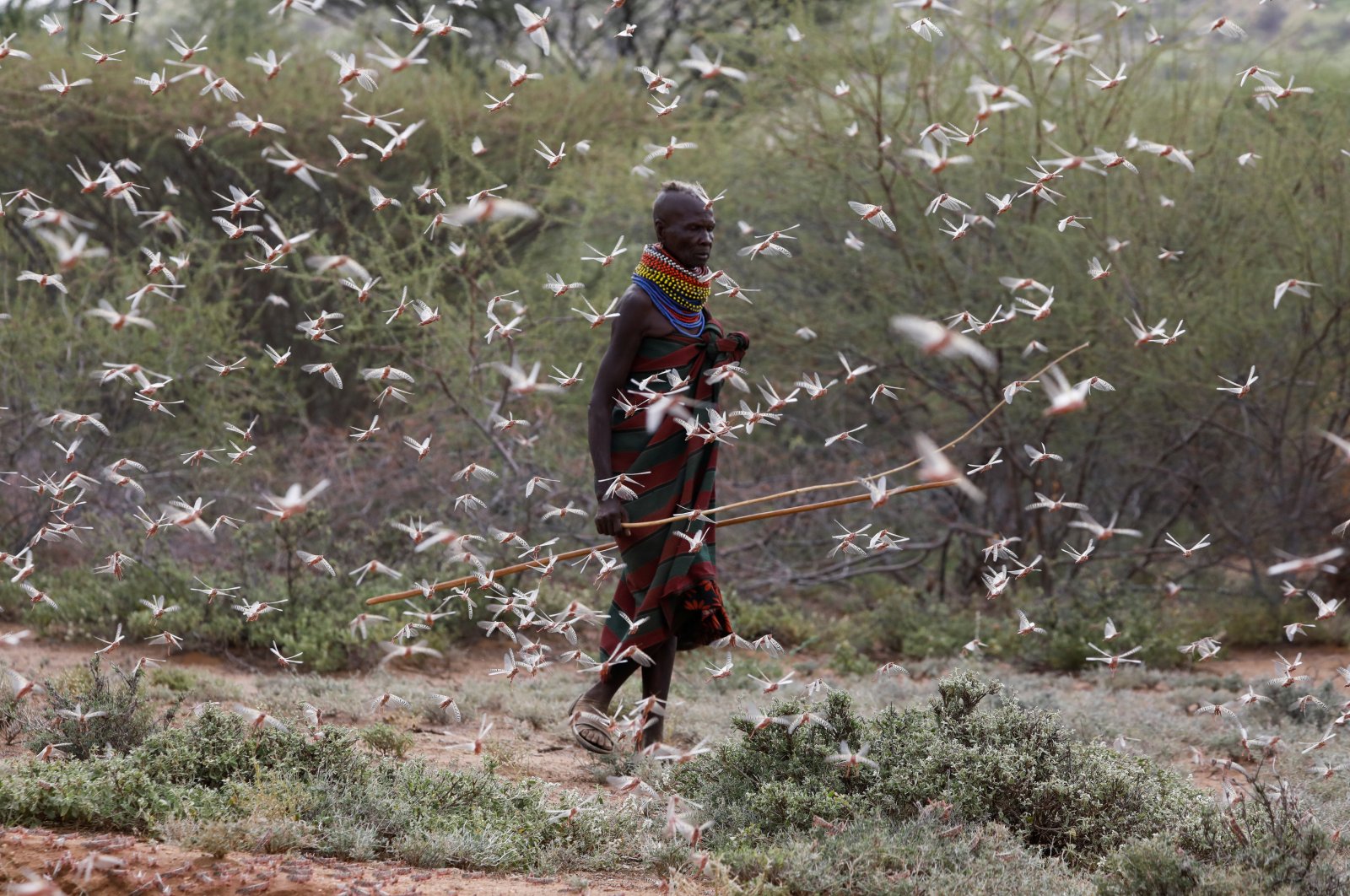 A member of the Turkana tribe walks through a swarm of desert locusts in the village of Lorengippi near the town of Lodwar, Turkana county, Kenya, July 2, 2020. (REUTERS Photo)
by Daily Sabah with AA Oct 12, 2020 11:33 am
RECOMMENDED

Kenya is expected to face a second wave of desert locusts in November after the first hit earlier this year, the United Nations Food and Agriculture Organization (FAO) has warned, underscoring that the situation remains worrisome in the Horn of Africa and could potentially deteriorate further this month because of recent breeding.

In a Desert Locust situational update report released on Oct. 5, the FAO said that there will be an increased threat of swarm migration from Yemen, northeastern Ethiopia and northern Somalia south to eastern Ethiopia and central Somalia in October that could extend to northern Kenya in November, resulting in the second wave for the country.

Locust numbers, the worst in three generations, surged in East Africa and the Red Sea region in late 2019 and early this year, encouraged by unseasonably wet weather and dispersed by a record number of cyclones. The pests could cost East Africa and Yemen $8.5 billion this year, the World Bank has said. Swarms can fly up to 150 kilometers (93 miles) a day with the wind, and a single square kilometer (0.39 square mile) swarm can eat as much food in a day as 35,000 people. Desert locusts feed on nearly all green vegetation and crops including leaves, flowers, bark, fruit, millet and rice.

Aerial spraying is the only effective way to control the locust outbreak. After the locusts crossed into Uganda for the first time since the 1960s, soldiers resorted to using hand-held spray pumps because of difficulties in obtaining the needed aircraft.

The FAO also reported that there are upcoming threats to Central and Eastern African countries. In September, the U.N. agency warned that locusts could endanger up to 7 million people in the southern region, further exasperating food insecurity. The outbreaks of African migratory locusts in Botswana, Namibia, Zambia and Zimbabwe are not related to the billions that have affected East Africa for months, the FAO said.

While far smaller, the southern outbreaks need quick attention to prevent a wider problem as farmers and others are already struggling to recover from last year's drought and the economic effects of the COVID-19 pandemic, the U.N. agency said in a statement. A swarm of the voracious insects “can eat enough food for 2,500 people in a day,” a separate FAO document reported on the southern Africa outbreaks. A single swarm can contain millions of locusts.