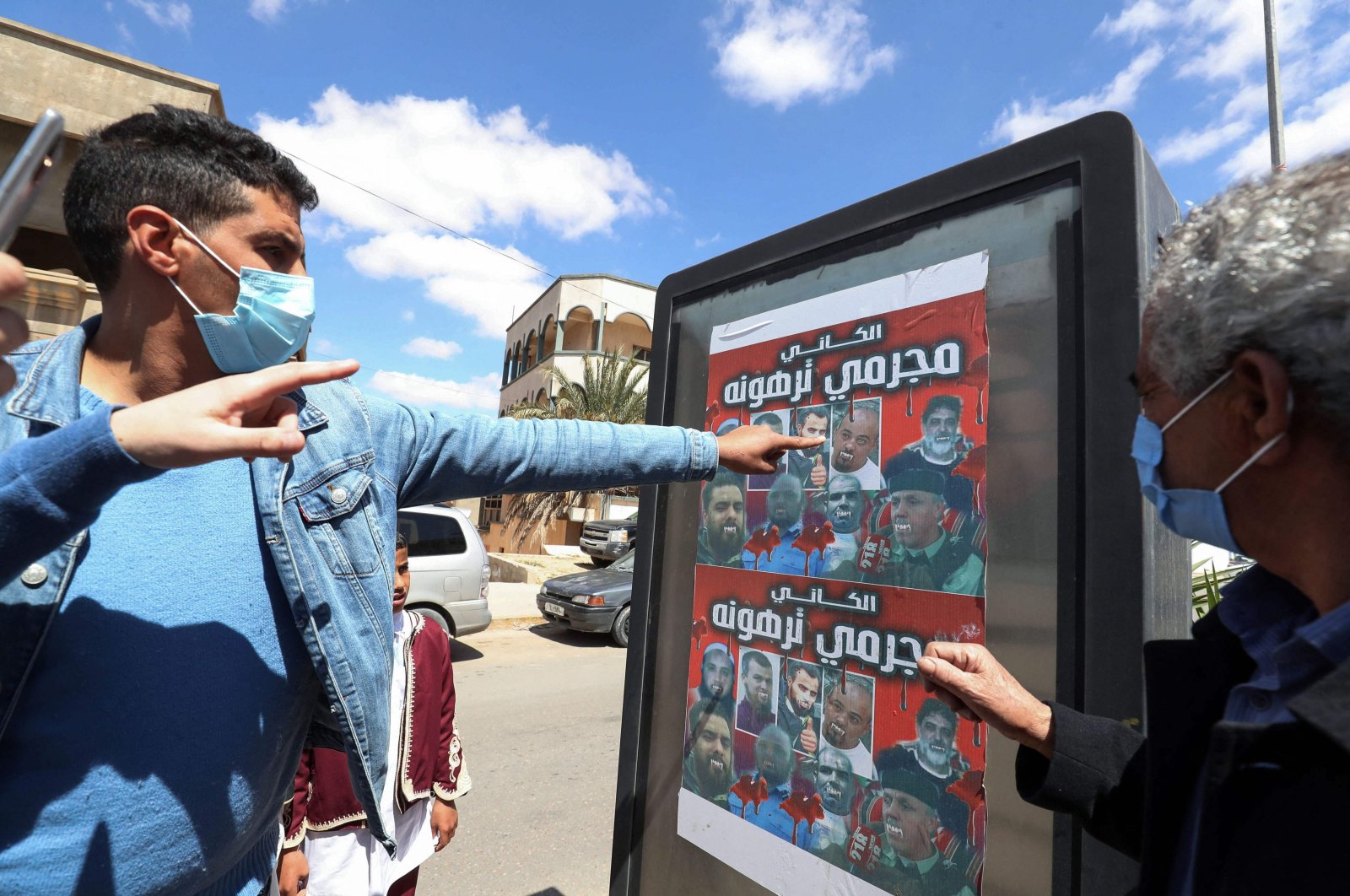 Libyans look at a poster depicting members of a family who commanded a militia that traumatized Tarhuna town with the Arabic phrase "al-Kani, Tarhuna's criminals", during a funeral procession for 12 bodies that were identified from mass graves found in Tarhuna town, March 26, 2021. (AFP)
by DAILY SABAH WITH AGENCIES Jul 28, 2021 10:59 am
RECOMMENDED

A Libyan militia leader, accused of major human rights violations and sanctioned by the United States, has been shot dead on Tuesday in eastern Benghazi province, officials stated.

Libyan officials said security forces raided Mohamed al-Kani’s house in Benghazi to carry out an arrest warrant on charges of killing civilians. Libyan officials and the U.S. allege al-Kani was responsible for the deaths of people found in mass graves last year in the western town of Tarhuna.

The officials said al-Kani was killed in an exchange of gunfire along with one of his associates. A third man was arrested, according to the officials who spoke on condition of anonymity because they were not authorized to brief media.

Mohamed al-Tarhuni, a spokesperson for the militia, confirmed al-Kani’s death.

Mass graves were found in Tarhuna last year after the militia's withdrawal, following the collapse of Haftar’s 14-month campaign to wrest control of Tripoli.

The U.S. Treasury placed al-Kani and his militia under sanctions in November after finding them responsible for killing the civilians whose bodies were discovered in several mass graves in Tarhuna. They also alleged the militia had committed acts of torture, forced disappearances and displacement of civilians.

Fatou Bensouda, a former chief prosecutor of the International Criminal Court, told the United Nations Security Council in November that her office was working with the Tripoli government “in relation to these mass graves,” where many bodies were found blindfolded and with hands tied.

Haftar’s 2019 offensive, supported by Egypt, the United Arab Emirates and Russia, collapsed in June 2020 when the Tripoli government, with support from Turkey and Qatar, gained the upper hand. A U.N.-brokered cease-fire was reached in October that stopped hostilities.