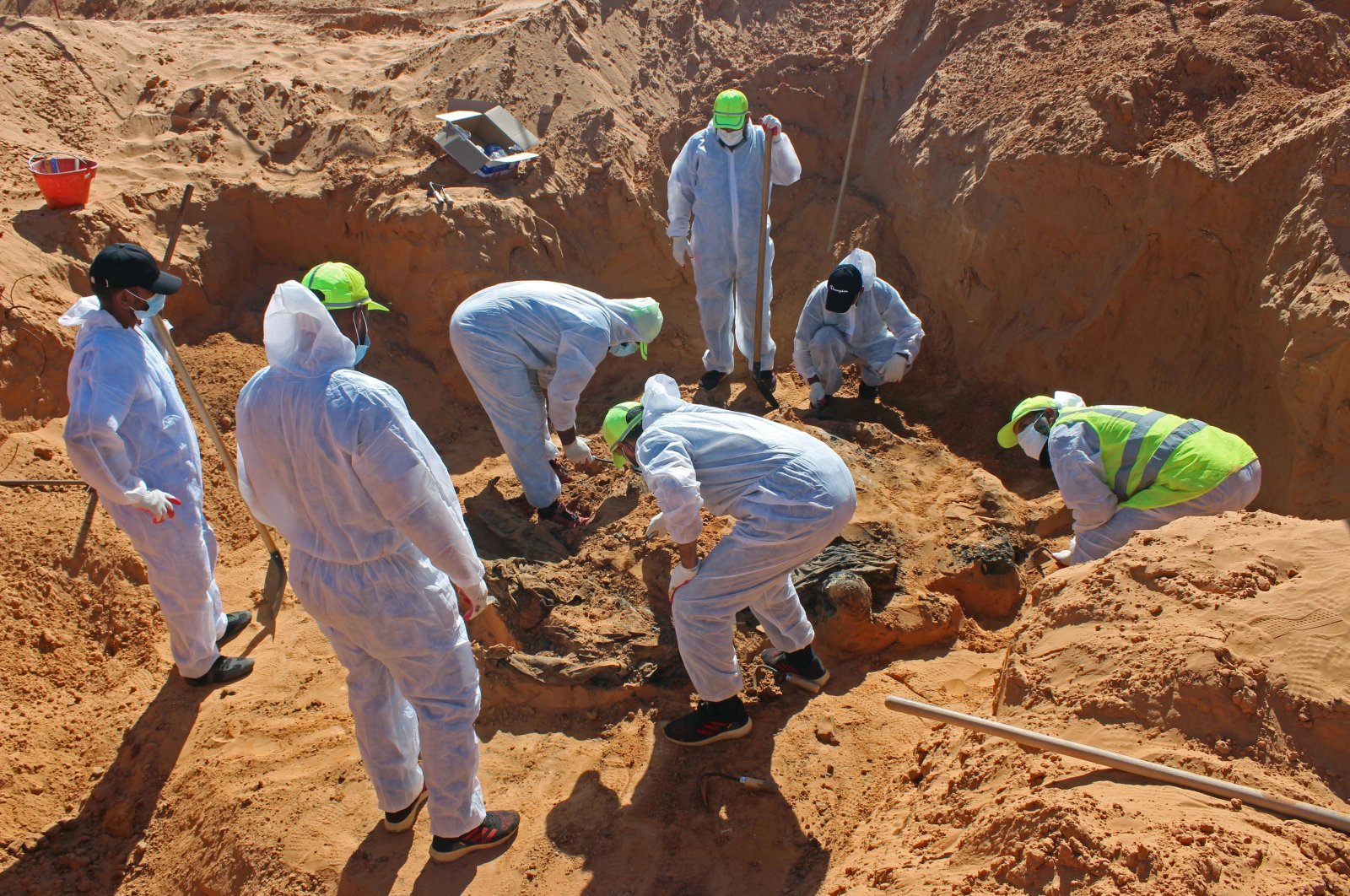 Members of the Government of National Accord's (GNA) missing person bureau exhume bodies from a mass grave in Tarhuna, Libya, Oct. 27, 2020. (Reuters Photo)
by DAILY SABAH WITH AGENCIES
Oct 29, 2020 11:34 am

Libyan authorities have dug up 12 bodies from four more unmarked graves in the city of Tarhuna, adding to the scores of corpses already discovered since the area was recaptured in June from the eastern-based forces loyal to putschist Gen. Khalifa Haftar by the United Nations-recognized Government of National Accord (GNA).

Tarhuna had been controlled for years by a militia known as the Kaniyat, run by the local Kani family, which fought alongside Haftar's forces. The GNA has issued arrest warrants for Kaniyat leaders who are now believed to be in eastern Libya.

When Turkish support helped the internationally recognized GNA take back Tarhuna in a sudden advance in June, its fighters found a hospital piled with bodies and unmarked graves containing missing people.

Investigators from the GNA's missing person bureau have since been working to dig through the ruddy earth around Tarhuna for human remains and to identify the bodies.

Many of the bodies discovered so far were those found in the hospital. However, dozens of bodies have also been unearthed from the unmarked gravesites.

Some of the bodies discovered show the marks of violence, including, among those revealed this week, a smashed skull and dismembered limbs, a missing person bureau official said.

In the Libyan conflict, tensions escalated further when Haftar forces launched an offensive in April 2019 trying to capture the legitimate government-held capital, Tripoli. Haftar’s campaign collapsed in June when forces backing the government, with Turkish support, gained the upper hand.

Haftar is supported by the United Arab Emirates (UAE), Russia, Jordan and Egypt, while the U.N.-supported government in Tripoli is backed by the wealthy Gulf state of Qatar and by Turkey.

Most recently, the U.N. Security Council (UNSC) on Tuesday ratified a cease-fire hammered out between Libya's warring parties on Oct. 23, calling on both sides to "implement the agreement in full." The declaration is to be followed up soon by a U.N. resolution, diplomatic sources said.

"The members of the security council welcomed the permanent cease-fire agreement" signed in Geneva under the aegis of the U.N. and called on "the Libyan parties to abide by their commitments."

The UNSC also called on the two sides "to show the same determination in reaching a political solution" when they meet to discuss the issue further on Nov. 9 in Tunisia, the declaration added.

Stephanie Williams, the acting U.N. envoy for Libya, announced at the end of military talks in Geneva with the rival parties on Friday that the cease-fire would start immediately and that all foreign fighters must leave the country within 90 days. She called it “a moment that will go down in history.”

The UNSC press statement on Tuesday recalled the resolution it adopted on Sept. 15, demanding that all countries enforce the widely violated arms embargo and withdraw all mercenaries from Libya. It also emphasized the importance of the commitment of the participants at the Berlin conference to comply with the arms embargo “and to refrain from intervening in the armed conflict or in the internal affairs of Libya.”

Ahead of the cease-fire agreement, talks in Egypt and Morocco resulted in positive steps by the warring sides, including a preliminary deal aimed at guiding the country toward elections within 18 months and demilitarizing the contested city of Sirte. They also agreed to exchange prisoners and open up air and land transit across the country’s divided territory.

Following Friday’s cease-fire agreement, a commercial plane from Tripoli landed in the eastern city of Benghazi – the first in 18 months.