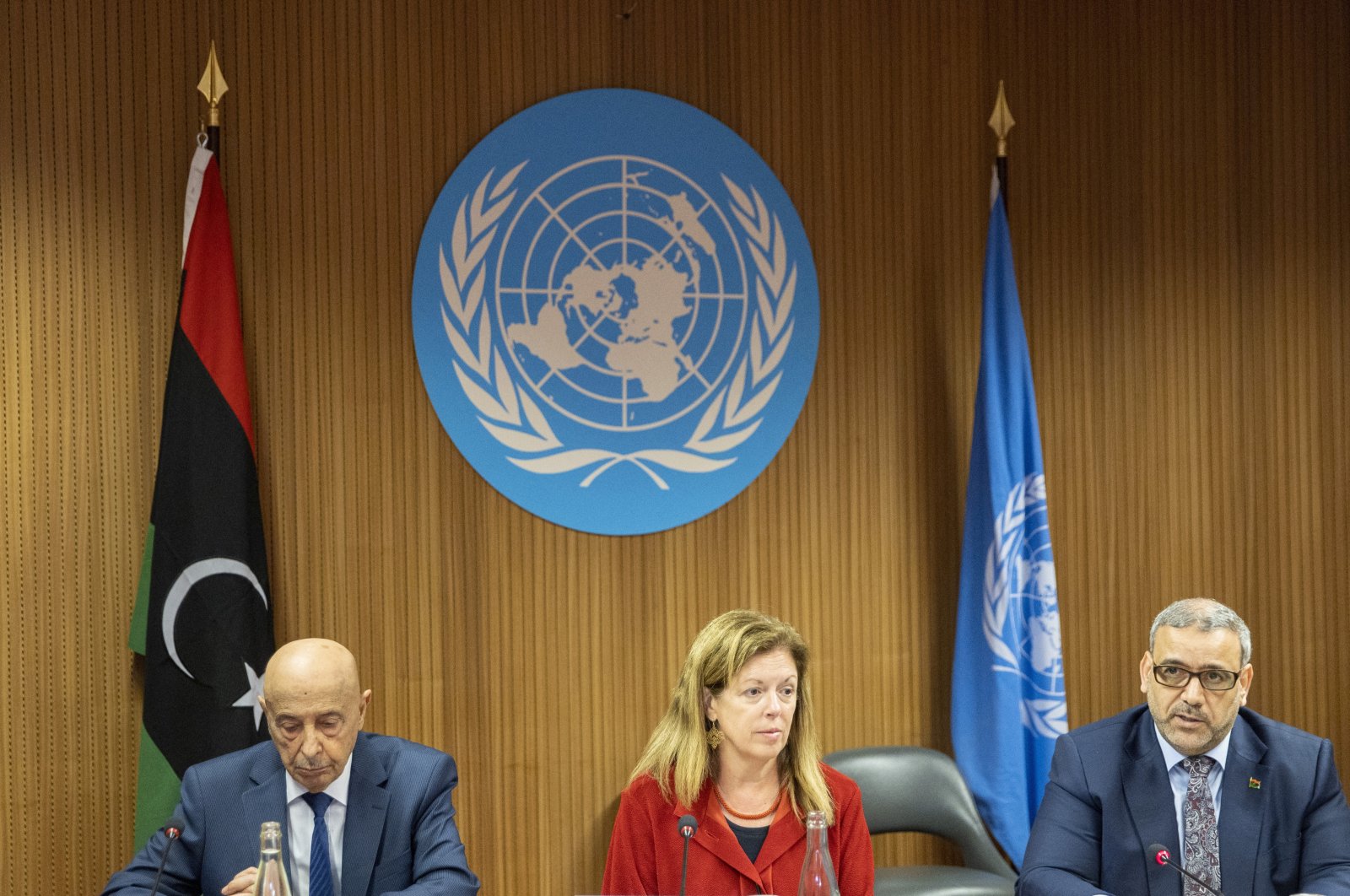 Aguila Saleh, the influential speaker of the country's east-based parliament, and Khaled al-Meshri, head of the government’s Supreme Council of State, based in the west, met on Tuesday in the capital Tripoli to discuss constitutional arrangements for elections.

According to the United Nations, the talks, which are taking place at the U.N. headquarters in Geneva, will focus on a draft constitutional framework for elections after Libya’s rival factions failed to reach an agreement in their last round of talks in Cairo.

Stephanie Williams, the U.N. special adviser on Libya, said they would discuss "timelines, modalities and milestones to guarantee a clear path to the holding of national elections as soon possible.”

“It is now the time to make a final and courageous effort to ensure that this historic compromise takes place, for the sake of Libya, the Libyan people and the credibility of its institutions,” she said.

The criteria for a presidential candidacy were a contentious point in the talks, according to the Libyan media. The Tripoli-based council insisted on banning military personnel from running for the country’s top post — apparently a move directed at the divisive putschist Gen. Khalifa Haftar, whose forces are loyal to the east-based administration.

Haftar had announced his bid in elections slated for last December but the vote was not held because of myriad issues, including controversial hopefuls who had announced candidacy and disputes about election laws.

There are growing tensions on the ground, and sporadic clashes between rival militias recently erupted in Tripoli. Living conditions have also deteriorated, mainly because of fuel shortages in the oil-rich nation. Tribal leaders have shut down many oil facilities, including the country’s largest field.

The blockade was largely meant to cut off key state revenues to the incumbent Prime Minister Abdul Hamid Dbeibah, who has refused to step down even though the vote was not held in December.

Now, Dbeibah and another prime minister, Fathy Bashagha, appointed by the east-based parliament to lead a transitional government, are claiming power. The rivalry has sparked fears the oil-rich country could slide back to fighting after tentative steps toward unity last year.

Libya has been wrecked by conflict since a NATO-backed uprising toppled and killed longtime dictator Moammar Gadhafi in 2011. The country was then for years split between rival administrations in the east and west, each supported by different militias and foreign governments.

The U.S. ambassador to Libya said on Tuesday that it could be possible to hold national elections without resolving a standoff between two rival governments and that a mechanism to oversee spending could help with governance for an interim period.

A scheduled election planned for December last year collapsed amid disputes over the rules. Although the parliament has appointed a new government, the one installed last year through a U.N.-backed process refuses to step down.

Libyans fear the crisis will derail efforts to get the elections back on track and could return the country to territorial partition and civil war.

The ambassador, Richard Norland, told Reuters in an interview that while he was optimistic that Geneva talks this week could resolve the impasse, there were ways to move forward without a single Libyan government.

Factions that dominated different parts of the country could separately lead those areas toward a national election.

"The reality of the Libyan political scene is that no single actor can produce an outcome. The only formula that's going to work is for the key actors to get together and negotiate a compromise," he said.

He said that if this week's Geneva talks between Libya's two legislative bodies on a constitutional basis for elections did not produce a deal, he expected further negotiations that would build on areas already agreed.

The U.S. is pushing efforts to reduce conflict by ensuring fair, transparent spending of Libya's oil revenue until an elected government can take office.

The U.S. and international partners have held meetings with Libyan figures to work out agreements on spending priorities, transparency, funding allocations and oversight of how money is used, he said.

"It's essentially a committee and you want the right people and the right organizations," he said, including from state auditing bodies, parliament, finance ministry and others.

He said there had been buy-in from eastern and western factions to the idea, and that it would require broad involvement so that "the various political strands in the country feel their interests are being addressed."

Economic disputes have amplified this year as the political crisis accelerated. Groups aligned with eastern forces have blockaded oil output as a tactic to demand the parliament-appointed government resume power.

And on Tuesday the eastern branch of the central bank indicated it could start printing its own money as the process of reunifying the bank hits problems.

He said that a mechanism to resolve financial disputes over oil revenue is key to reunifying the central banks.

"This mechanism could provide a short-term pseudo-governmental function until elections take place, so the sooner that happens, the better for all Libyans," he added.