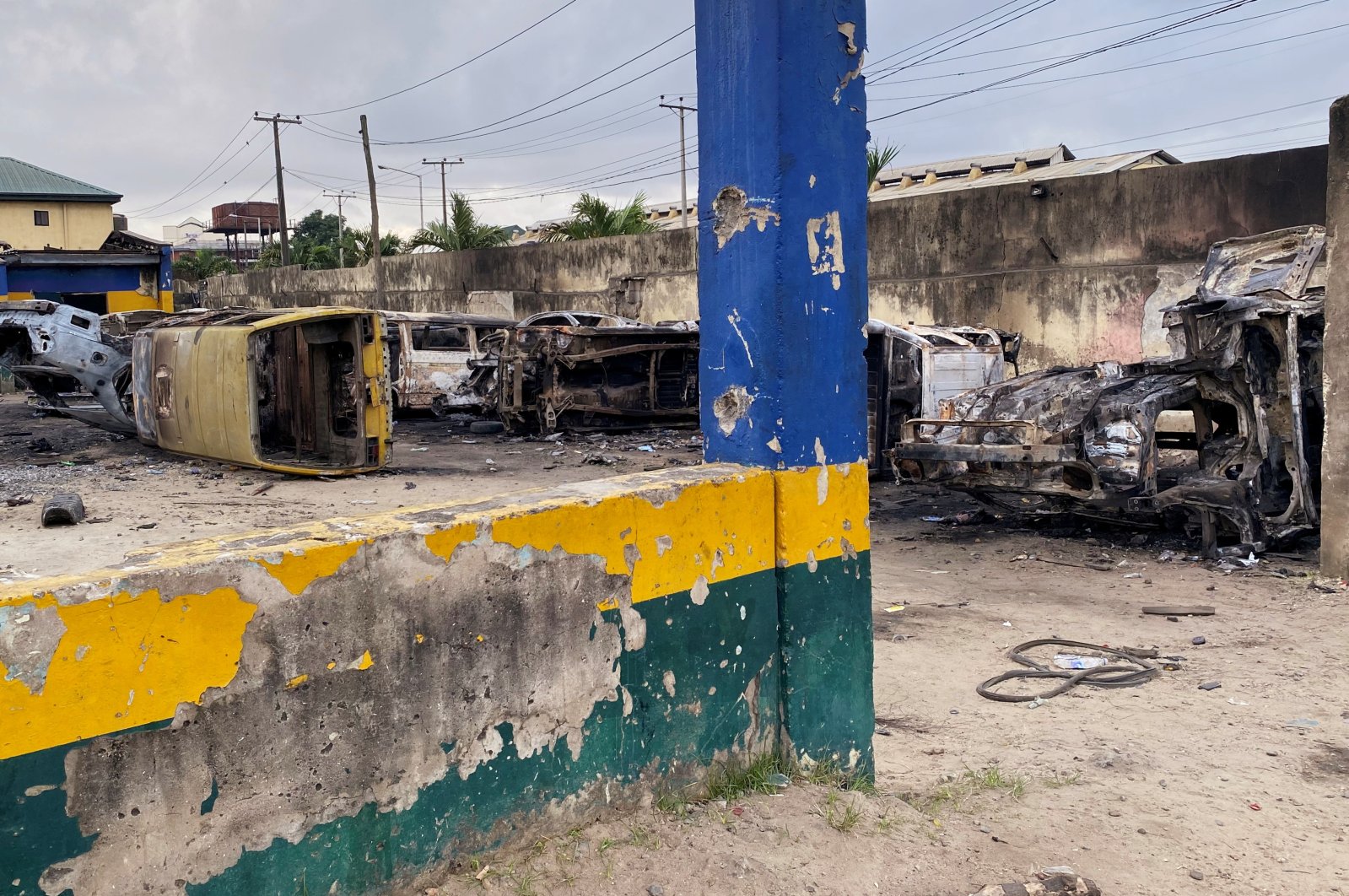 Looters stormed through Lagos while one of Nigeria's main prisons was set on fire on Thursday as part of escalating protests against police violence. Videos circulated on social media showed clouds of billowing smoke rising from the Ikoyi Correctional Centre in the commercial capital Lagos.

The prison blaze is the latest in a chain of violence in Nigeria's largest city since soldiers launched a bloody crackdown on protests against police violence.

Nigerian President Muhammadu Buhari spoke to the nation about the unrest that has gripped the country in recent days, but without mentioning the shootings of peaceful protesters at the Lekki toll gate on Tuesday night that prompted international outrage.

The military opened fire without warning on thousands of peaceful protesters singing the national anthem Tuesday night, killing at least 12 people, according to Amnesty International.

The shootings have been widely condemned, but Buhari did not speak of them at all during his Thursday address, instead urging protestors to stop their demonstrations. “This government will not allow anybody or (any) groups to disrupt the peace of the nation,” he warned in his televised address, urging protesters to “resist the temptation of being used by some subversive elements to cause chaos with the aim of truncating our nascent democracy." “For you to do otherwise will amount to undermining national security and law and order," he said. "Under no circumstances would this be tolerated.” He called on Nigeria's youths “to discontinue the street protests and constructively engage the government in finding solutions. Your voice has been heard loud and clear, and we are responding.”

Protests erupted in Nigeria two weeks ago over police brutality by the loathed Special Anti-Robbery Squad. Buhari scrapped the unit and pledged reforms, but the demands from the young protesters broadened to calls for more sweeping change. Authorities said the demonstrations were increasingly being taken over by criminals as violence flared and sought to shut them down.

Nigeria's army has denied that its soldiers opened fire on demonstrators on Tuesday. But U.N. High Commissioner for Human Rights Michelle Bachelet said there were signs the attack was "premeditated, planned and coordinated."

The incident unleashed a wave of major unrest on the streets of Lagos that has seen supermarkets emptied and prisons attacked. Authorities insist the violence is being carried out by "hoodlums" and have sent the army out into the city to restore order.

In the middle-class neighborhood of Lekki, soldiers had taken control of the streets by Thursday afternoon. But the burnt-out husks of official buildings, smoldering wreckage of cars and smashed shopfronts testified to the ferocity of the mayhem. "Now they have seen what we are capable of," one angry youth said. "We are just hungry, we are tired."

In another district, a warehouse holding food that was meant to be distributed to poor residents impacted by coronavirus restrictions was ransacked. Further east in oil-rich Delta state, authorities ordered a 48-hour curfew after incidents of arson, robberies and attacks on a prison and other public buildings.

Nigeria, which has a median age of 18 and the highest number of people in extreme poverty in the world, is a tinderbox of deep grievances. Africa's biggest oil producer and largest economy is facing a profound recession after the coronavirus prompted a fall in crude oil prices that crippled state revenue.