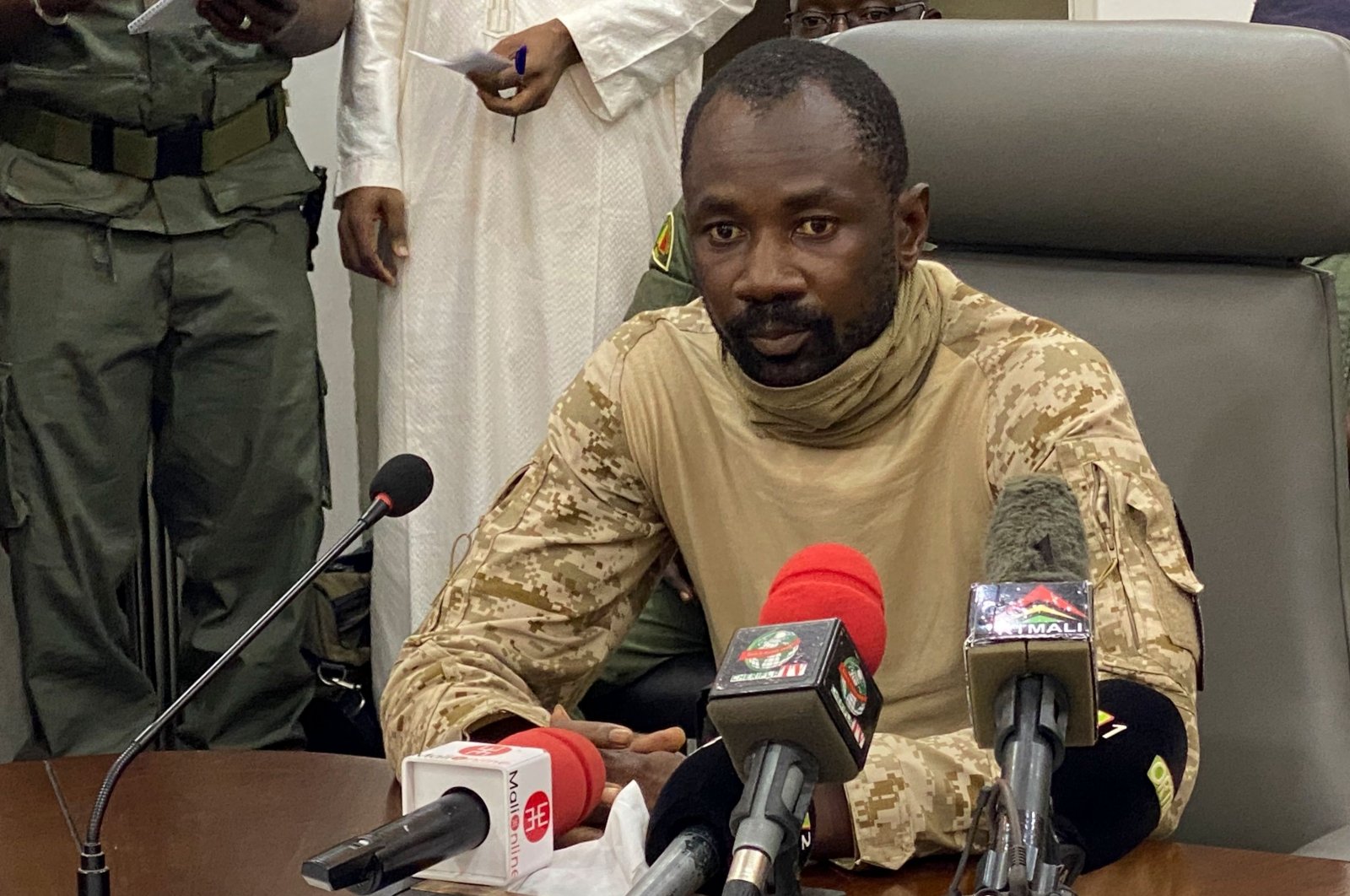 Col. Assimi Goita speaks to the press at the Malian Ministry of Defence, after confirming his position as the president of the National Committee for the Salvation of the People (CNSP), Bamako, Mali, August 19, 2020. (AFP Photo)
by French Press Agency - AFP Jul 26, 2021 11:22 am
RECOMMENDED

A man accused of the attempted assassination of Mali's military strongman Assimi Goita, the figure behind two coups in less than a year, has died in custody, the government said Sunday.

The suspect, whose identity has not been revealed, had been taken into custody following the assassination attempt at Bamako's Grand Mosque Tuesday. "During investigations ... his health deteriorated" and he was then hospitalized, but "unfortunately, he has died," the government said in a statement. It added that an autopsy had been immediately ordered to determine the cause of death.

A man armed with a knife lunged at Goita after prayers for Qurban Bayram, also known as Eid al-Adha, Tuesday, according to an Agence France-Presse (AFP) reporter at the scene. Goita was whisked away by his security detail and later appeared on state TV to say he was doing "very well," downplaying the significance of the assault.

"That's part of being a leader, there are always malcontents," he said. "There are people who at any time may want to try things to cause instability," he explained.

His attacker, a young-looking man dressed in jeans and a white shirt, was apprehended at the scene and taken away by the Malian intelligence services.

The suspect was never presented to judicial authorities, a source requesting anonymity told AFP Sunday. His identity was not revealed, but Commissioner Sadio Tomoda said late Tuesday that he was a teacher, without elaborating. Prosecutors had opened an inquiry into the incident.

On Sunday, the government said the suspect's death was not an obstacle to continuing the investigation, "especially since preliminary evidence and intelligence gathered indicate that he was not an isolated element."

The attack capped months of political turmoil in a country that has rarely enjoyed stability since gaining independence from France in 1960.

Goita, a special forces colonel in his late thirties, headed a putsch last August that ousted elected president Ibrahim Boubacar Keita after weeks of protests over graft and a bloody extremist insurgency.

The junta, in the face of international condemnation, handed power to a civilian-led transitional government that promised to restore civilian rule in February 2022. But in late May, Goita, who was vice president in the transitional government, ousted president Bah Ndaw and premier Moctar Ouane, saying they had sought to "sabotage" the handover. In June, with Goita as interim president, a new government was unveiled, with military figures in key roles.

As the African Union (AU) and the West African regional bloc ECOWAS piled pressure on the country, Goita vowed the government would uphold all commitments and pledged to stage "credible, fair and transparent elections."

Mali's neighbors and allies have been viewing the crisis with disquiet, fearing the impact on efforts to stem an extremist insurgency that is unfurling across the Sahel region. The bloody campaign erupted in the north of Mali in 2012 and has since spread to Burkina Faso, Mali and Niger. Thousands of soldiers and civilians have been killed and hundreds of thousands have fled their homes.

France, the mainstay of the anti-extremist operation, has been especially critical of the military takeover in Mali. It suspended military cooperation after the second coup and then announced a major drawdown of its 5,100-man Barkhane mission.