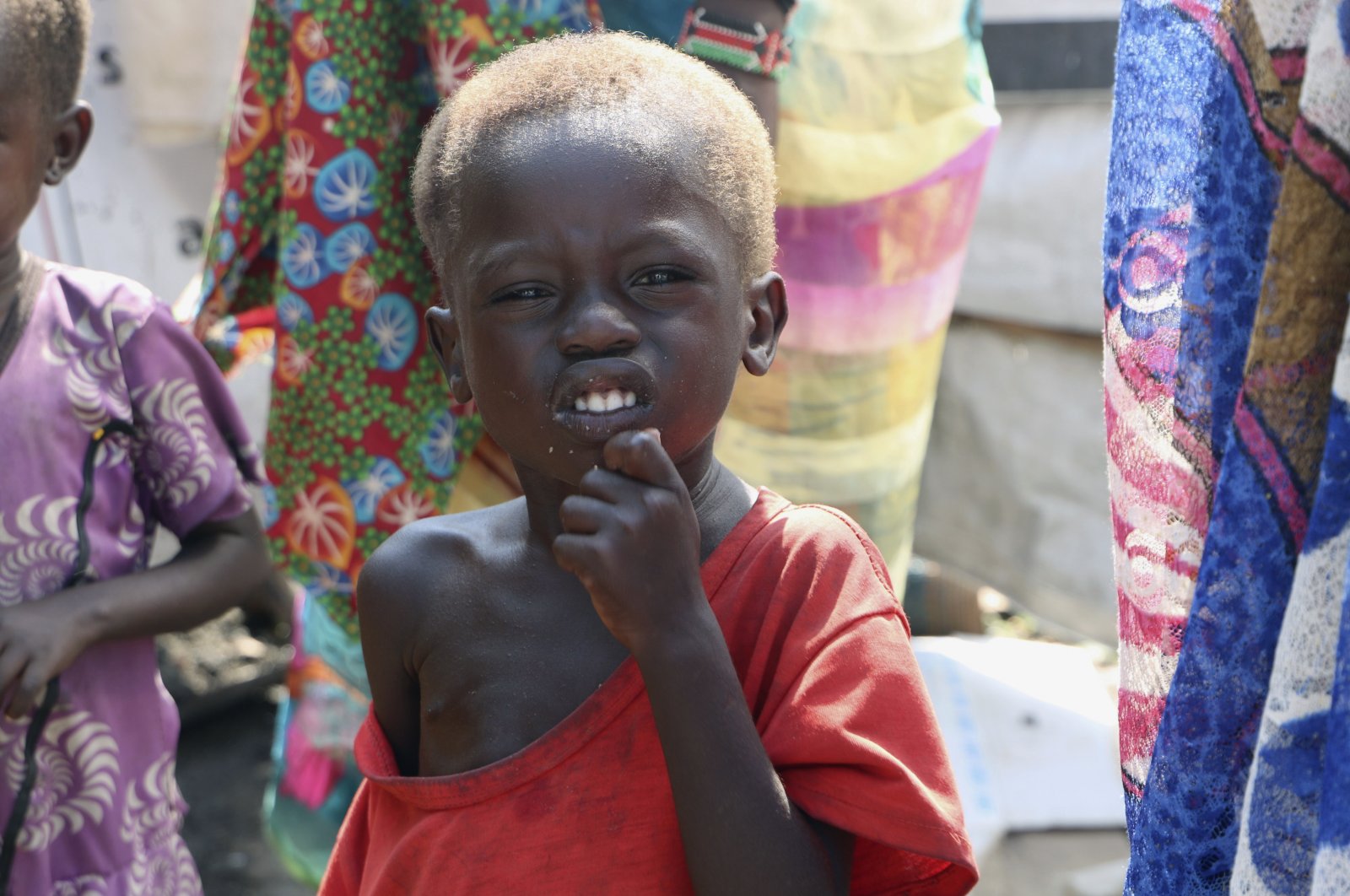 More than a million children are at imminent risk of death as famine looms in the world's youngest nation, with humanitarian organizations warning of an escalating crisis driven by catastrophic flooding and political instability

Persistent conflict, flooding and displacement have pushed at least a million children in the world's youngest nation of South Sudan to the brink of starvation, a leading humanitarian organization for children said, warning of a devastating large-scale hunger crisis impacting children in the East African country.

"New data shows a dramatic increase in food insecurity that has pushed one million children to the brink of starvation – as well as projections that this figure will rise by 13% in the first half of next year," Save the Children said Wednesday with the organization's Acting Country Director of South Sudan Patrick Analo asserting that the "perfect storm of hunger, floods, violence and displacement has created a crisis in which children are suffering the most," as reported by Anadolu Agency (AA).

According to the organization, the country has one of the highest child mortality rates in the world with more than 90 children out of 1,000 dying before the age of 5.

"Children have witnessed unimaginable acts of violence committed against their loved ones. Thousands have been separated from their families and are now at risk of exploitation and abuse," Analo added. He called on the country's Transitional National Government of Unity to protect children who are affected by conflict through political intervention, while the United Nations and other aid agencies said last week they will be scaling up food assistance in South Sudan in the coming months with the aim of saving more than 7 million lives.

The new findings by international food security experts mean this could be the first part of the world to declare a state of famine since 2017, when another part of the country was deeply embroiled in civil war.

South Sudan is one of four countries with regions that could slip into famine, the U.N. has warned, along with Yemen, Burkina Faso and northeastern Nigeria. Over 30,000 people are facing starvation in South Sudan's Pibor county, which has seen deadly local violence and unprecedented flooding that have hurt aid efforts.

On a visit to the town of Lekuangole this month, seven families told The Associated Press (AP) that 13 of their children starved to death between February and November. The head of Lekuangole’s government, Peter Golu, said he received unprecedented reports from community leaders that 17 children had died from hunger there and in surrounding villages between September and December.

The Famine Review Committee’s report, released this month by the Integrated Food Security Phase Classification (IPC), stops short of declaring famine due to insufficient data. Famine is believed to be occurring, meaning at least 20% of households face extreme food gaps and at least 30% of children are acutely malnourished. The South Sudanese government is not endorsing the report's findings, fearing that if a famine were to occur, it would be seen as a failure.

"They are making assumptions. ... We are here dealing with facts, they are not on the ground,” said the chair of South Sudan's food security committee, John Pangech, according to remarks carried by AP. The government says 11,000 people across the country are on the brink of starvation, far less than the 105,000 estimated by the new report by food security experts.

The government also expects that 60% of the country’s population, or some 7 million people, could face extreme hunger next year, with the hardest-hit areas being the Warrap, Jonglei and Northern Bahr el Ghazal states.

South Sudan has been struggling to recover from a five-year civil war. Food security experts say the magnitude of the hunger crisis has been mostly created by the fighting, including bouts of violence this year between communities with alleged support from the government and opposition.

The government "is not only denying the severity of what is happening but is denying the basic fact that its own policies and military tactics are responsible,” said Alex de Waal, author of "Mass Starvation: The History and Future of Famine” and executive director of the World Peace Foundation.

More than 2,000 people have been killed this year in localized violence that’s been "weaponized” by people acting in their own interests, the head of the U.N. mission in South Sudan, David Shearer, has said. Violence has prevented people from cultivating crops, blocked supply routes, burned down markets and killed aid workers, with families in Lekuangole reporting that their crops were destroyed by the fighting and they are now having to subsist on leaves and fruit.

Staff at the health clinic in Lekuangole registered 20 severely malnourished children in the first week and a half of December, more than five times the number of cases for the same period last year, said a nurse, Gabriel Gogol.

Flooding has cut off most road access to the town of Pibor and its better medical care, forcing some severely sick children to travel for three days along the river in flimsy plastic rafts. Officials in Pibor county say they don’t understand why South Sudan's government isn’t acknowledging the scale of the hunger.

"If people are saying in (the capital) that there’s no famine in Pibor, they’re lying and want people to die,” said David Langole Varo, who works for the humanitarian arm of the government in the Greater Pibor Administrative Area.

In Pibor town, malnourished mothers and children wait for hours outside health clinics, hoping for food. In a joint statement last week, three U.N. agencies called for immediate access to parts of Pibor county where people were facing catastrophic levels of hunger.

The World Food Programme (WFP) has faced challenges in delivering aid this year. Approximately 635 metric tons (700 tons) of food were stolen from Pibor county and Jonglei state, enough to feed 72,000 people, and an air drop of food in Lekuangole killed an elderly woman in October.

The WFP said it needs more than $470 million over the next six months to address the hunger crisis. Families now worry about a resurgence in fighting as the dry season approaches. Sitting in a clinic run by Doctors Without Borders in Pibor town, Elizabeth Girosdh watched her 8-month-old twins fight over her breast milk. The 45-year-old lost her crops during fighting in her village of Verteth in June. One of the twins is severely malnourished.

"Sometimes I try to breastfeed but I can’t and the kids cry and cry all night,” she said. "If there’s not enough food, I worry I could lose them."