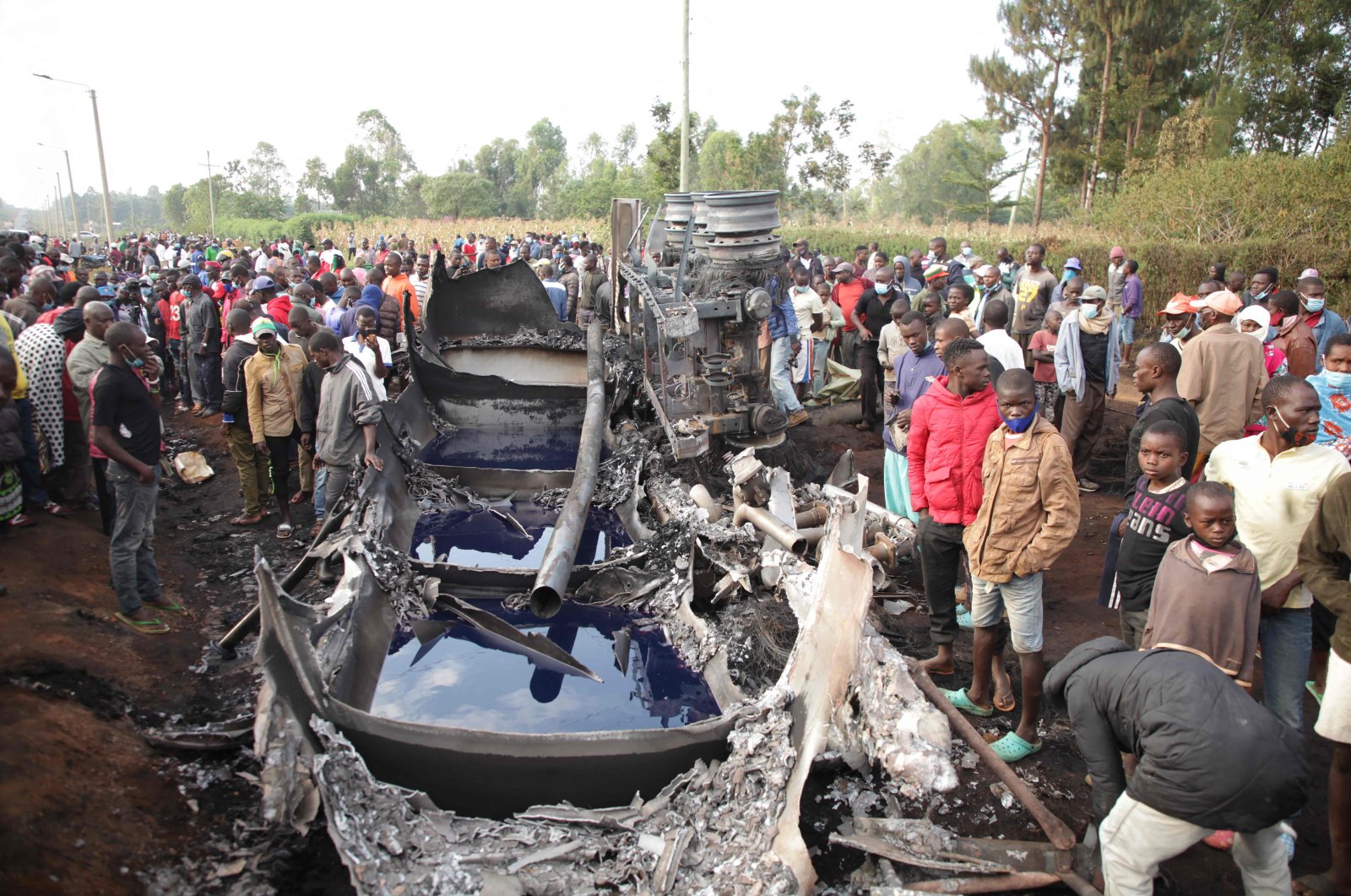 People stand next to a burnt-out petrol tanker that burst into flames when it overturned in western Kenya, while a crowd thronged to collect the spilling fuel, July 18, 2021. (AFP Photo)
by French Press Agency - AFP Jul 18, 2021 2:56 pm
RECOMMENDED

A "huge fireball" engulfed a crowd in Kenya after an overturned fuel truck they were siphoning fuel from ignited without warning, killing 13 people and severely injuring several others.

Police said Sunday the death toll could rise, with investigators trying to account for the missing and the charred bones found among the twisted wreckage of the fuel tanker.

The truck collided with another vehicle and turned over late Saturday near Malanga, some 315 kilometers (195 miles) northwest of Nairobi, on the busy highway between Kisumu and the border with Uganda.

Onlookers rushed to the crash site with jerrycans to collect the leaking fuel but shortly after the truck exploded, consuming the crowd in a terrible inferno.

"We were woken up by a very loud blast. When I rushed out, I saw a huge fireball and people were screaming," said nearby resident Jack Odhiambo.

Those on the scene first managed to get away safely with some fuel, said witness Magdalene Adhiambo.

But others went back for a second round, and the crowd grew larger as more and more people arrived hoping to get lucky.

"That's when the fire started," she said.

Wycliffe Otieno said he had just started filling his jerrycan when the slick around him ignited.

"I was able to run to safety ... I just don't know how lucky I was, because I have been told the people we were with did not survive," Otieno said from his hospital bed.

Burned with their motorbikes

Charles Chacha, a local police chief in Siaya County where the accident occurred, said 24 people were in hospital with serious burns. Earlier, he said children were among those injured.

Investigators were still combing the charred wreckage and fear the death toll could climb.

"The death toll we have as of now is still 13. These are bodies at the mortuary," Chacha said.

"However, we have people who are unaccounted for. We will require a proper examination to determine if there were people burnt completely at the scene, where bones were found."

Fire crews arrived on the scene two hours later to douse the inferno. The cause of the explosion is not yet known.

Four motorbikes were found smoldering not far from the tanker. Witnesses said motorcycle drivers had rushed to the site with jerrycans and were close to the tanker when it exploded.

"Some were burned with their motorbikes," said Otieno.

Images broadcast by Kenyan media showed the blazing tanker lighting up the night sky and in the morning following, crowds gaping at the disfigured, smoldering wreckage.

In 2009, more than 100 people were killed when a petrol tanker overturned northwest of Nairobi and an explosion consumed those gathering to collect leaking fuel.

More recently, at least 100 people were killed when a tanker exploded in Tanzania in 2019 while in 2015 more than 200 perished in a similar accident in South Sudan.