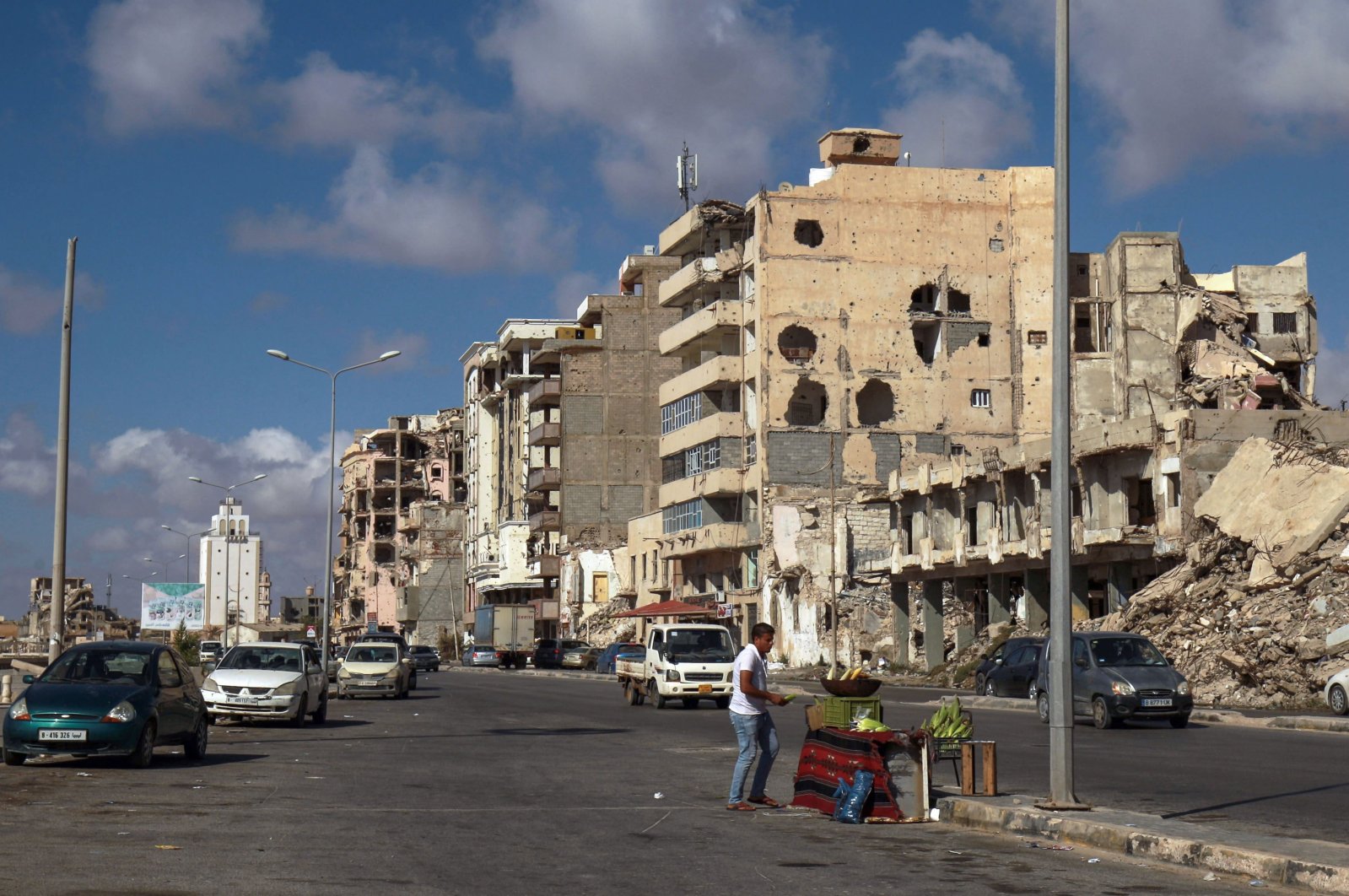 A Libyan street vendor sells corn on the roadside by the waterfront promenade in the eastern port city of Benghazi, June 22, 2020. (AFP Photo)
by REUTERS Nov 10, 2020 7:08 pm
RECOMMENDED

Gunmen shot dead a prominent dissident in the eastern Libyan city of Benghazi on Tuesday as political talks in neighboring Tunisia focused on a road map toward elections in Libya.

According to media reports, assailants in three vehicles opened fire on al-Barassi when she was leaving her car on the 20th Street in Benghazi.

The Libya-based February TV channel reported that al-Barassi was killed by a militia affiliated with Saddam, the son of Haftar, without giving further details.

It was a reminder of the bloodshed still racking Libya as peace talks continued in Tunis and military negotiators hashed out cease-fire details in the front-line city of Sirte.

"Barassi has been publicly vocal about cases of alleged assault and rape of women in Benghazi in which she implicated members of the armed groups in Benghazi, and she also alleged financial fraud," said Hanan Salah, senior Libya researcher for New York-based Human Rights Watch (HRW).

Amnesty International said Barassi and her daughter had received death threats. It noted that her social media page had said on Monday she planned to release video exposing corruption within Haftar's family.

The Libya Observer website said that her assassination came "days after her strong criticism of the son of Haftar and the interior minister in the eastern-based government."

The assassination also occurred less than two hours after al-Barassi appeared in a live broadcast on her official Facebook page, in which she criticized a number of Haftar's followers.

On Sunday, al-Barassi shared a video revealing details of her daughter's exposure to an assassination attempt in Benghazi.

In March, she was kidnapped after her appearance in a video on social media in which she criticized Haftar and his policy in Benghazi.

Neither Haftar forces nor other authorities in eastern Libya immediately released any statement about the assassination.

The Cyrenaica Commission in eastern Libya called in a statement on the international community to investigate Haftar's crimes and "bring him to accountability instead of recognizing him."

The Libyan Bar Association, of which al-Barassi was a member, denounced the assassination as a "heinous crime," holding the unrecognized government in eastern Libya responsible for the killing.

"This crime will not silence the voices of the lawyers," the association said in a statement.

Local authorities in Libya's Eastern Province also called for an urgent and rapid investigation into the killing and for the criminals to be brought to justice.

"Ms. al-Barassi had been a vocal critic of corruption, abuse of power and human rights violations. Her tragic death illustrates the threats faced by Libyan women as they dare to speak out," UNSMIL said in a statement.

"The killing of Ms. al-Barassi is a strong reminder for Libyans in positions of responsibility that they should put their differences aside and swiftly forge an inclusive solution to the protracted crisis to restore justice and accountability and end the prevailing climate of impunity," it added.

"Silencing the voices of peaceful activists should not be tolerated and we reiterate our strong commitment to allowing all Libyans, including women and youth, to have a voice in their country's future," the embassy said in a statement.

The embassy went on to call on the Libyan authorities to investigate al-Barassi's killing and bring all those responsible to justice.

A similar condemnation was expressed by the German Ambassador to Libya, Oliver Owcza, who described the assassination as "cowardly."

In a tweet, Owcza said: "Perpetrators must be held accountable. Strong voices like hers working for a peaceful future of Libya will keep guiding our cooperation."

Amnesty International also denounced the killing, saying it "has consistently criticized a number of individuals associated with armed groups in eastern Libya," referring to Haftar's militia.

"She (al-Barassi) had been receiving death threats against her and her daughter as a result," the London-based rights watchdog tweeted.

Amnesty called for an urgent investigation into the assassination and for those responsible to be brought to justice.

The Geneva-based Euro-Mediterranean Human Rights Monitor said: "Total impunity enabled militias and murderers to end activists' lives simply for expressing their views amid an utter silence from the international community."

Libya has been split since 2014 between Haftar's forces and the internationally recognized Government of National Accord (GNA) in Tripoli in the west.

Both sides represent coalitions of armed groups as well as regional and political factions. Turkey supports the GNA, while the United Arab Emirates (UAE), Russia and Egypt back Haftar.

In June the GNA repelled Haftar's 14-month assault on Tripoli, and front lines have solidified near Sirte on Libya's central Mediterranean coast.

Last month the United Nations-brokered a cease-fire, and on Tuesday a joint military commission from both sides met at a new Sirte headquarters to detail ways to implement it, including withdrawals from front lines.

The progress in military talks comes as the United Nations presses political talks in Tunis involving 75 representatives to discuss a path to elections and the formation of a new unified transitional government.