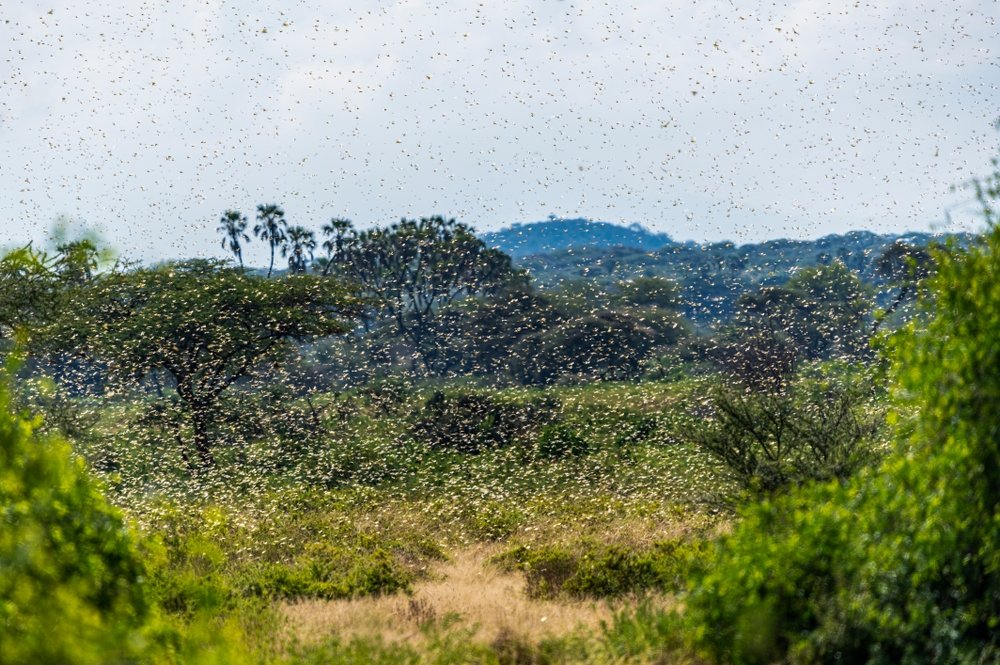 Somalia announced a state of emergency Wednesday over a new generation of desert locust swarms that have rocked the East African region.

The United Nations' Food and Agriculture Organization (FAO) had warned that its entire fleet of anti-locust aircraft in Kenya and Somalia could be grounded due to a funding shortfall of $38 million.

The intensity of the East African desert locust outbreak has also been blamed on climate change with a focus on Cyclone Gati in the Indian Ocean, which made landfall on the Somali coast, the FAO said. In a statement, it warned that "rains and winds are two of the most favorable conditions for desert locusts to multiply rapidly and spread to areas where they had been under control.”

Dominique Burgeon, the FAO's director of emergencies and resilience, told reporters that the huge desert locust swarms in 2020, some as wide as 60 kilometers (37 miles), had not been seen in decades, threatening food security in a region where many were already going hungry, and the 2021 swarms have been said to be deadlier, as Anadolu Agency (AA) reported.

Fifteen out of 47 counties in neighboring Kenya have been hit by a second, deadlier wave of locusts that came in through Ethiopia and Somalia. The Kenyan government announced that most of the new swarms came in through southern Somalia. Other East African countries including Uganda, South Sudan, Eritrea and Djibouti are also at risk. Millions of people in some of these places are already facing hunger in the wake of civil war or more common challenges such as poverty.

Just like in Somalia, the counties hit by the deadly swarms have arid and semi-arid lands where most people are nomadic pastoralists who rely on livestock for a living. Experts say that in Somalia, where about 50% of the people depend on animals for their livelihoods, the locusts are eating the pasturage. The animals weaken, their milk decreases and small children, who depend on the milk to survive, suffer skyrocketing malnutrition, the experts said, according to The Associated Press (AP).

Last year, young hungry locusts bulked up in Somalia, threatening 10 million people across the region with a severe hunger crisis. Large parts of Somalia south of this semi-autonomous Puntland region are under threat or held by the al-Qaida-linked al-Shabab terrorist group. That makes it difficult or impossible to conduct the aerial spraying of the locusts that experts say is the only effective control.

In December the U.N. said that locust infestations had increased in Ethiopia and Somalia as a result of extensive breeding, favorable weather and rainfall, with populations predicted to increase further in the coming months.

“New locust swarms are already forming and threatening to re-invade northern Kenya and breeding is also underway on both sides of the Red Sea, posing a new threat to Eritrea, Saudi Arabia, Sudan and Yemen,” FQO said in a news release on Dec. 16.

It warned that the new crisis could have devastating consequences for communities affected by drought, ongoing conflict, rising food prices and the coronavirus pandemic.

"We have achieved much, but the battle against this relentless pest is not yet over," said the director-general of FAO, QU Dongyu. "We must not waver. Locusts keep growing day and night and risks are exacerbating food insecurity for vulnerable families across the affected region."