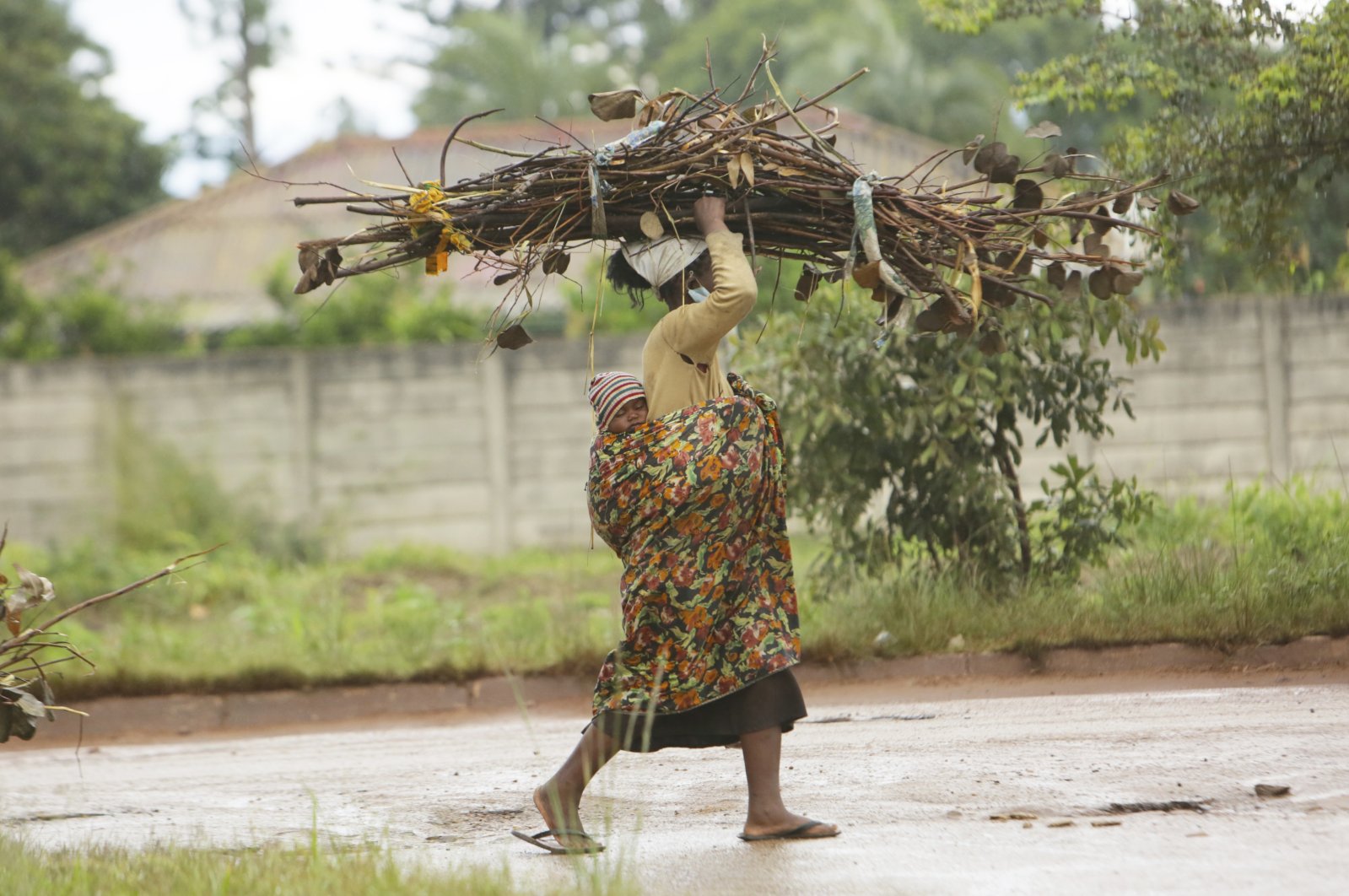 A woman with a baby strapped on her back carries firewood for cooking on the streets of Harare, March 2, 2021. (AP Photo)
by ASSOCIATED PRESS Mar 08, 2021 4:04 pm
RECOMMENDED

From driving trucks and fixing cars to encouraging girls living with disabilities to find their places in society, women in Zimbabwe are refusing to be defined by their gender or circumstance, even as the global COVID-19 pandemic hits them hardest and imposes extra burdens.

There are very few female truck drivers in Zimbabwe, but Molly Manatse doesn't like to be singled out for her gender. "It has always been known as a male job, but don’t say I am a female driver. We are just drivers, we do the same job,” insists 31-year old Manatse, a Zimbabwean truck driver whose income helps take care of relatives who have lost jobs due to COVID-19.

As International Women's Day is marked around the world Monday, Zimbabwe's women celebrate the progress they have made in tackling discrimination in the workplace and acknowledge more effort is necessary. In many instances, Zimbabwean women have become leaders to help this troubled southern African country grapple with the double trauma of COVID-19 and ongoing economic deterioration.

However, many women say it is not easy to achieve equality or professional recognition and they are often reminded of women's traditionally subservient role in Zimbabwe.

"Once you get home they expect you to cook, they expect you to wash clothes ... all the household work, you have to do it. That is a challenge,” Manatse told The Associated Press, as she prepared for a 1,700-kilometer (1,056-mile) trip to neighboring South Africa’s port city of Durban. She is the only female driver at a trucking company that employs 80 drivers, she said.

Memory Mukabeta, 37, runs a car repair shop, a vocation traditionally viewed as a male domain. Like Manatse, these days she is helping to support members of her extended family whose livelihoods have been hit by the restrictions caused by the virus.

"Some of them are male relatives, they no longer have jobs so I take care of them,” said Mukabeta, who said at times she has been forced to close her business by lockdown rules.

After a devastating resurgence that saw an increase in numbers of COVID-19 infections and deaths in December and January, Zimbabwe's government is beginning to relax restrictions and businesses are trying to recover.

However, it may be a longer road to recovery for businesses owned by women, especially in male-dominated sectors due to inherent prejudice, said Mukabeta. From the moment she answers the phone, many clients doubt her abilities, she said. "They expect a male to answer,” she said.

"You have to convince them. They will be asking me so many questions, they will doubt me,” she said, as she stripped down an accident-damaged truck in need of repair.

On paper, Zimbabwe has progressive laws that guarantee women's rights in the workplace and at home. The country is a signatory to international treaties supporting gender equality.

However, lack of implementation, as well as trained cultural practices that reinforce inequality mean women, who make up 52% of the population of 15 million, still lag behind in education, health and work, according to the United Nations Children’s Fund. UN Women projects that "8 million more women than men will be pushed into extreme poverty” in sub-Saharan Africa in 2021 due to the pandemic.

Although the pandemic has hit women the hardest, "instead of whining women are showing their grit,” said Florence Mudzingwa, whose organization, Hope Resurrect Trust, equips girls living with a disability with skills, equipment and confidence to make their way in the world, despite their gender and disabilities.

A digital marketer and life coach, Mudzingwa works from her wheelchair during the pandemic saying all she needs is her computer tablet, reliable internet and her brains. She has been using Whatsapp to encourage girls living with disabilities to sell items such as facemasks to put food on the table for their families during the pandemic.

"They can relate to me. They say ‘if she is working, we can also work.' This is not a time for self-pity, being a woman and living with disability should not turn us into charity cases,” she said.

Manatse, the truck driver, said recognition, respect and equality for women are unlikely to come on a silver platter in a highly patriarchal society such as Zimbabwe’s, even though women continue to prove their mettle during the pandemic.

"We have to fight,” said Manatse. "As we fight, we surely will come up with something and one day they will recognize us ... that we are not different.”