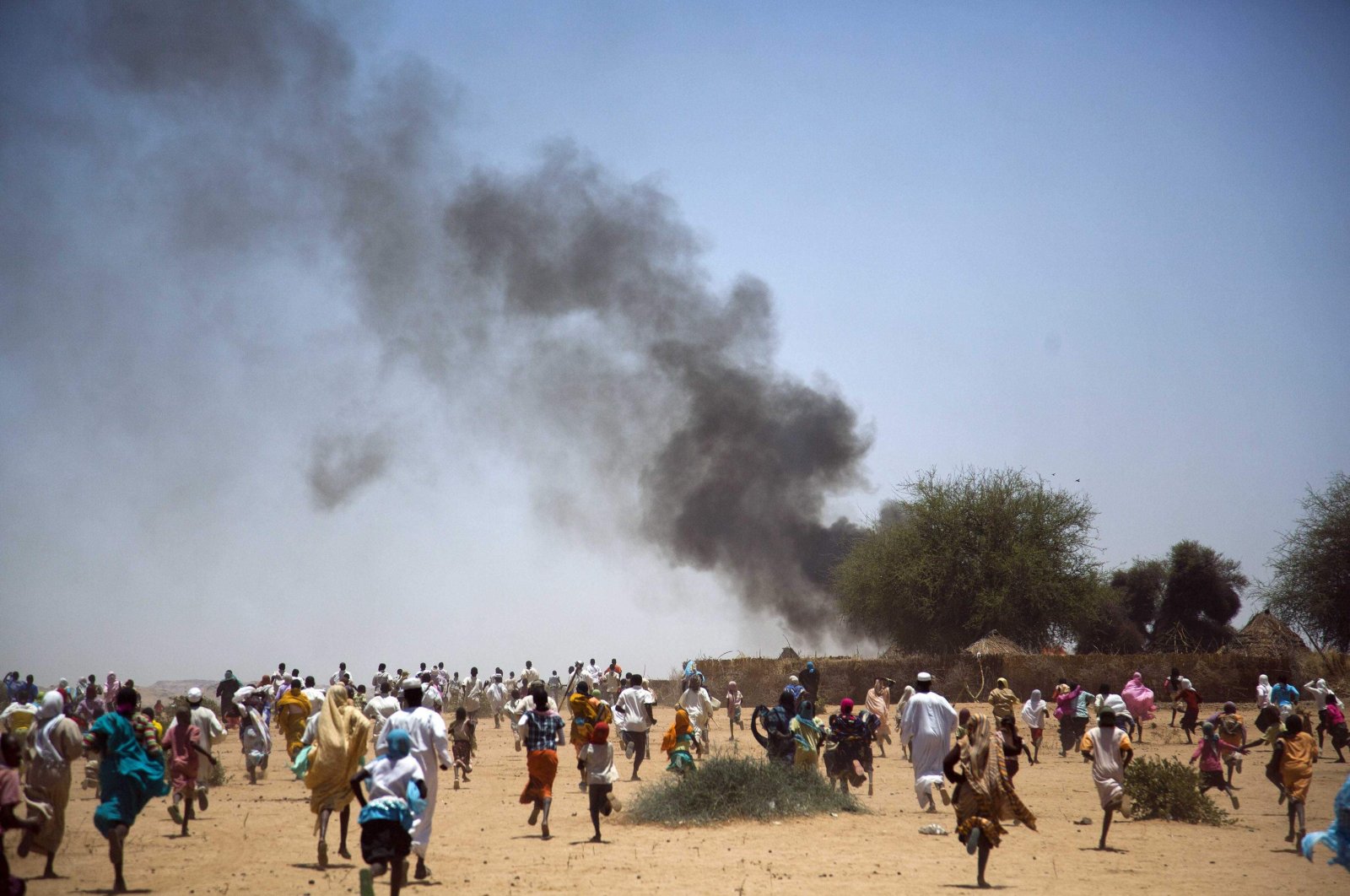 Villagers run away with their belongings from a fire in Kuma Garadayat, a village located in North Darfur, Sudan, May 19, 2011. (Reuters Photo)
by Agencies Dec 09, 2020 12:04 pm
RECOMMENDED

U.N. Security Council (UNSC) members affirmed their commitment to end the joint U.N.-African Union peacekeeping force in Sudan’s western Darfur region on Tuesday but were divided on the timing, with Russia and African nations calling for a Dec. 31 termination and several Western nations urging more time before an exit.

The council is under pressure to decide because the mandate of the joint mission, known as UNAMID, runs out on Dec. 31. In June, the council voted unanimously to move toward ending UNAMID, which has well over 6,000 military and police personnel and more than 1,500 civilian staffers, replacing it with a much smaller U.N. civilian mission.

The UNSC did not set a date for the turnover of UNAMID to a new political mission, the United Nations Integrated Transition Assistance Mission in Sudan (UNITAMS) said.

According to The Associated Press (AP) U.N. Political Chief Rosemary DiCarlo and all council members welcomed the peace agreement signed by the transitional government and rebel groups on Oct. 3. But she pointed to Sudan’s "dire economic situation,” exacerbated by a five-month shutdown to prevent the spread of COVID-19, as well as rising humanitarian needs driven in part by severe flooding and intercommunal violence.

The Sudanese government has been pressing for UNAMID to end on Dec. 31, and Russia’s deputy ambassador Anna Evstigneeva backed the end-of-year termination, as did Niger’s U.N. ambassador, Abdou Abarry, speaking on behalf of South Africa, Tunisia and St. Vincent and the Grenadines.

"The situation on the ground and arrangements set up by the transitional government to provide stability and protection of persons and property in Darfur are conducive for UNAMID to begin its withdrawal process and to hand over control to UNITAMS as of Dec. 31,” Abarry said. She added that the mission will focus on assisting the political transition, supporting peace processes, assisting peacebuilding, protecting civilians and the rule of law and supporting Sudanese efforts to mobilize the economy, development and humanitarian assistance. DiCarlo said the U.N. goal is for UNITAMS and the U.N. civilian country team to begin delivering on those objectives by Jan. 1.

U.N. peacekeeping chief Jean-Pierre Lacroix said Sudan's transitional government is resolved to take the responsibility of protecting its citizens – a key role of UNAMID peacekeepers – but questioned who would protect civilians during the transition.

He said the African Union (AU), the U.N. and the government have recommended the termination of UNAMID on Dec. 31 "followed by a six-month drawdown and liquidation thereafter.”

The drawdown will take no less than six months, he said, followed by a nine- to 12-month period "of asset disposal and liquidation” that will require the "full cooperation” of the government.

Darfur was the scene of a bitter conflict that broke out in 2003 between African minority rebels, complaining of marginalization, and forces backed by the government of now-ousted President Omar al-Bashir. The U.N. estimates the fighting killed 300,000 people and displaced 2.5 million others. The conflict has largely subsided over the years, apart from occasional clashes between pastoralists and displaced people settled in camps.

In October, Sudan's transitional government signed a peace deal with a coalition of rebel and political groups including from Darfur. The agreement covered pressing issues around security, land ownership, transitional justice, power-sharing and the return of people who fled their homes due to fighting. It also provides for the dismantling of rebel forces and the integration of their fighters into the national army. Only two groups have refused to sign the accord. Sudan's transitional government has agreed that al-Bashir will face the International Criminal Court on charges of genocide, war crimes and crimes against humanity in Darfur. Al-Bashir, who was ousted in April 2019, was jailed in Khartoum's high-security Kober prison, as reported by Agence France-Press (AFP). In the October peace deal with rebels, Sudan's government agreed to set up a special court for crimes in Darfur where it was said Bashir should also stand trial.