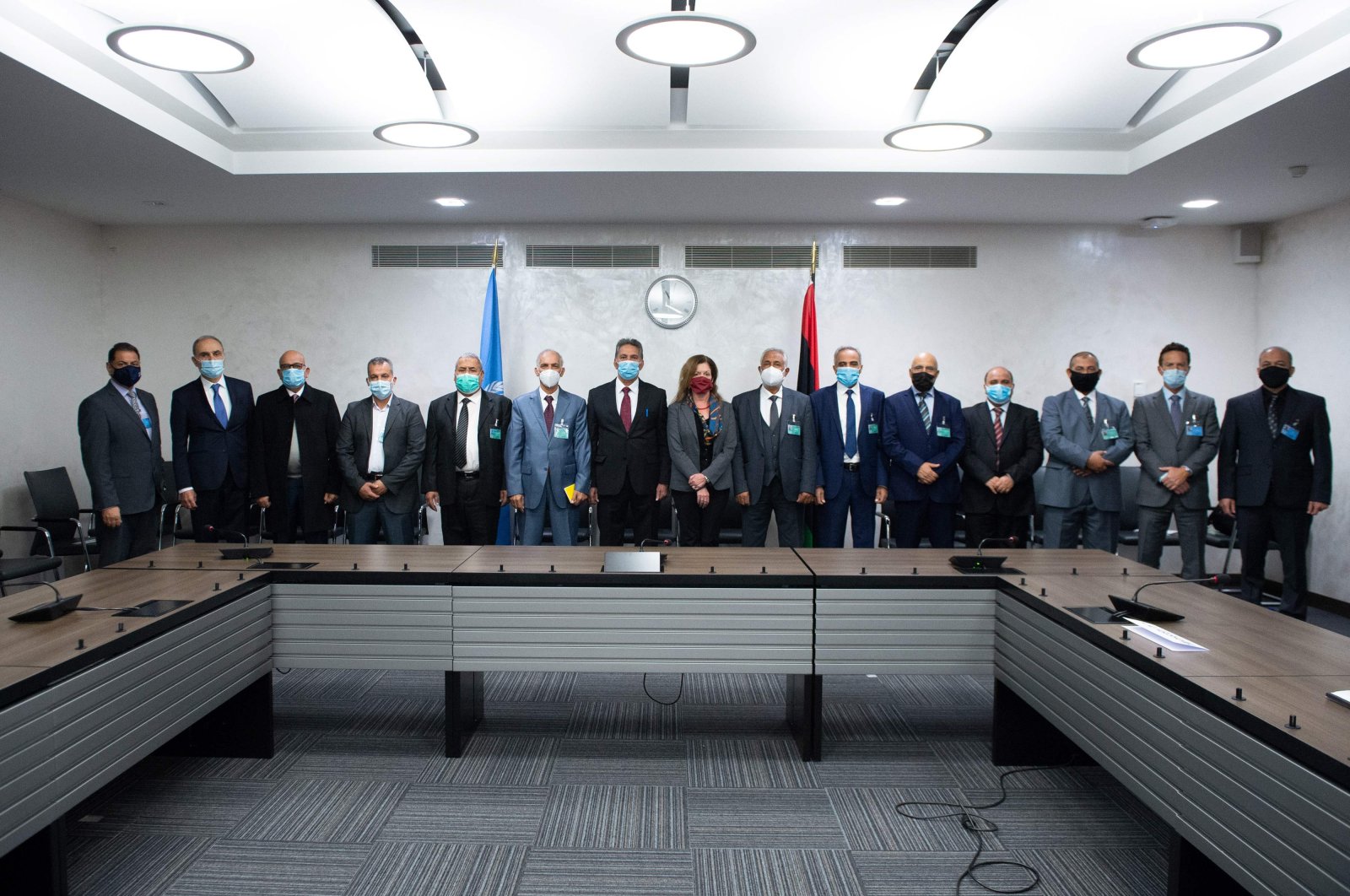 The acting U.N. envoy for Libya Stephanie Williams (8R) and representatives of the rival factions in the Libya conflict stand during the Libyan national anthem at the beginning of talks in Geneva, Oct. 19, 2020. (AFP Photo)
by DAILY SABAH WITH AGENCIES Oct 28, 2020 11:40 am
RECOMMENDED

The U.N. Security Council (UNSC) on Tuesday ratified the cease-fire hammered out between Libya's warring parties on Oct. 23, calling on both sides to "implement the agreement in full."

The declaration is to be followed up soon by a U.N. resolution, diplomatic sources said.

"The members of the Security Council welcomed the permanent cease-fire agreement" signed in Geneva under the aegis of the U.N., and called on "the Libyan parties to abide by their commitments."

The Security Council also called on the two sides "to show the same determination in reaching a political solution" when they meet to discuss the issue further on Nov. 9 in Tunisia, the declaration added.

Stephanie Williams, the acting U.N. envoy for Libya, announced at the end of military talks in Geneva with the rival parties on Friday that the cease-fire would start immediately and that all foreign fighters must leave the country within 90 days. She called it “a moment that will go down in history.”

Haftar is supported by the United Arab Emirates (UAE), Russia, Jordan and Egypt, while the U.N.-supported government in Tripoli is backed by the wealthy Gulf state of Qatar and by Turkey.

The UNSC press statement on Tuesday recalled the resolution it adopted Sept. 15 demanding that all countries enforce the widely violated arms embargo and withdraw all mercenaries from Libya – and the commitment of the participants at the Berlin conference to comply with the arms embargo “and to refrain from intervening in the armed conflict or in the internal affairs of Libya.”

Ahead of the cease-fire agreement, talks in Egypt and Morocco resulted in positive steps by the warring sides, including a preliminary deal aimed at guiding the country toward elections within 18 months and demilitarizing the contested city of Sirte. They also agreed to exchange prisoners and open up air and land transit across the country’s divided territory.

Following Friday’s cease-fire agreement, a commercial plane from Tripoli landed in the eastern city of Benghazi – the first in 18 months.