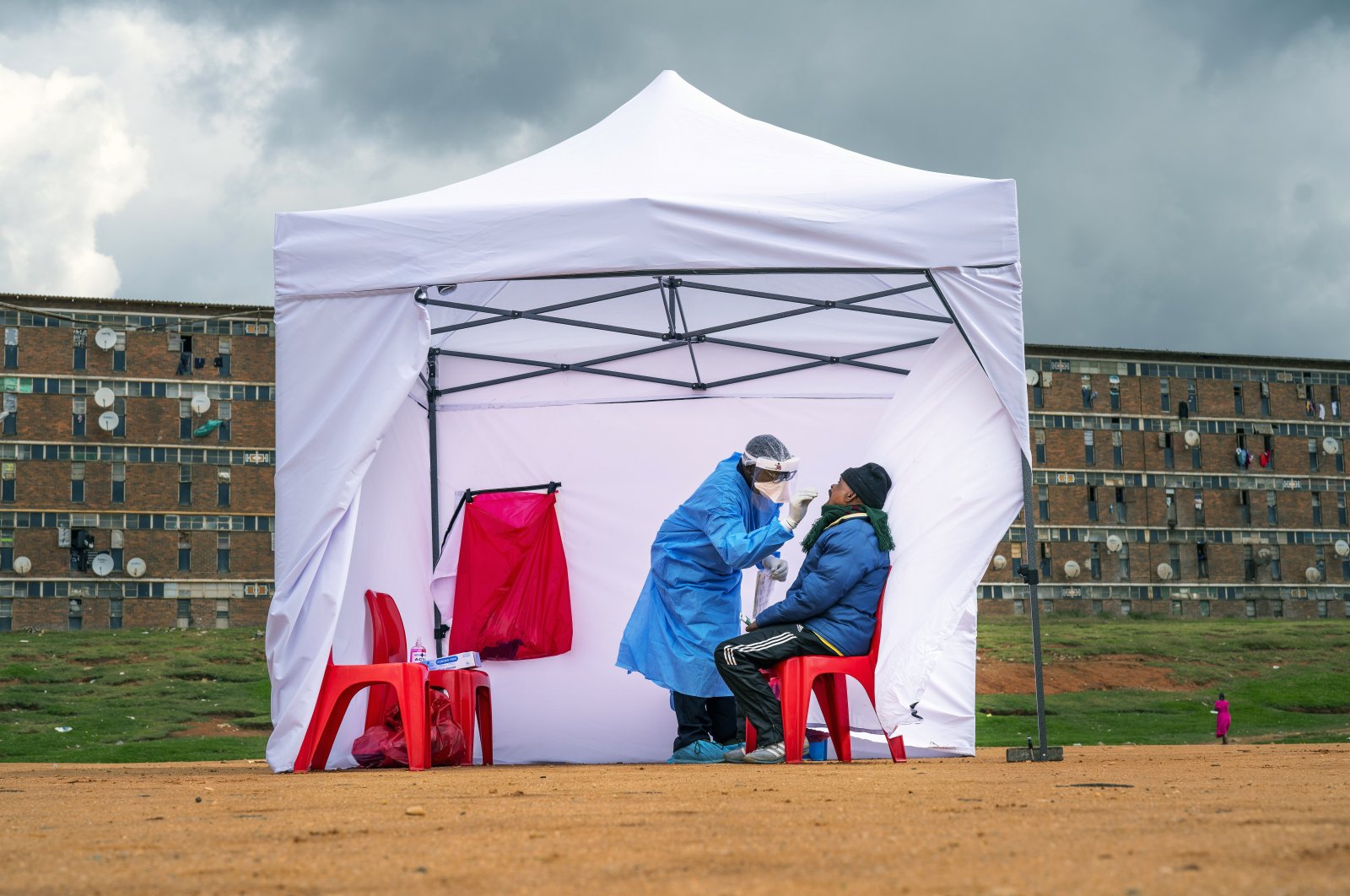 Governments across world rushed on Friday to bolster their defenses against a fresh coronavirus spike, as South Africa announced it had detected a new COVID-19 strain that scientists fear could torpedo efforts to beat the pandemic

Countries all over the world rushed Friday to raise the alarm regarding a new coronavirus variant that was detected in South Africa and is considered by scientists to be the most significant one yet found.

Scientists are now racing to understand the impact of the new strain, feared to be more infectious than the delta variant, which brought the world to its knees a year after the virus first surfaced in central China.

The new coronavirus variant is of concern due to its high number of mutations and rapid spread among young people in Gauteng, the country’s most populous province, South African Health Minister Joe Phaahla announced Thursday. The coronavirus evolves as it spreads and many new variants, including those with worrying mutations, often just die out.

“Over the last four or five days, there has been more of an exponential rise,” Phaahla said, adding that the new variant appears to be driving the spike in cases. Scientists in South Africa are working to determine what percentage of the new cases have been caused by the new variant.

Currently identified as B.1.1.529, the new variant has also been found in Botswana and Hong Kong in travelers from South Africa, he said.

The World Health Organization’s (WHO) technical working group was due to meet Friday to assess the new variant and may decide whether or not to give it a name from the Greek alphabet.

The WHO said it is "closely monitoring" the reported variant and is expected to determine if it should be designated a variant of "interest" or of "concern." Scientists have said the new B.1.1.529 variant has at least 10 mutations, compared to two for delta or three for beta.

"The concern is that when you have so many mutations, it can have an impact on how the virus behaves," Maria Van Kerkhove, the WHO's technical lead on COVID-19, said at a virtual press briefing.

The new variant has a “constellation” of new mutations, said Tulio de Oliveira, from the Network for Genomic Surveillance in South Africa, who has tracked the spread of the delta variant in the country.

The “very high number of mutations is a concern for predicted immune evasion and transmissibility,” said de Oliveira. “This new variant has many, many more mutations,” including more than 30 to the spike protein that affects transmissibility, he said.

“We can see that the variant is potentially spreading very fast. We do expect to start seeing pressure in the health care system in the next few days and weeks.”

De Oliveira said that a team of scientists from seven South African universities is studying the variant. They have 100 whole genomes of it and expect to have many more in the next few days, he said.

“We are concerned by the jump in evolution in this variant,” he said. The one piece of good news is that it can be detected by a polymerase chain reaction (PCR) test, he said.

After a period of relatively low transmission in which South Africa recorded just over 200 new confirmed cases per day, in the past week the daily new cases rapidly increased to more than 1,200 on Wednesday. On Thursday, they jumped to 2,465.

The first surge was in Pretoria and the surrounding Tshwane metropolitan area appeared to have cluster outbreaks from student gatherings at universities in the area, said Phaahla. Amid the rise in cases, scientists studied genomic sequencing and discovered the new variant.

“This is clearly a variant that we must be very serious about,” said Ravindra Gupta, professor of clinical microbiology at the University of Cambridge. “It has a high number of spike mutations that could affect transmissibility and immune response.”

Gupta said scientists in South Africa need time to determine if the surge in new cases is attributable to the new variant. “There is a high probability that this is the case,” he was quoted by The Associated Press (AP). “South African scientists have done an incredible job of identifying this quickly and bringing it to the world’s attention.”

South African officials had warned that a new resurgence was expected from mid-December to early January and had hoped to prepare for that by getting many more people vaccinated, said Phaahla.

About 41% of South Africa’s adults have been vaccinated and the number of shots being given per day is relatively low, at less than 130,000, significantly below the government’s target of 300,000 per day. South Africa, with a population of 60 million, has recorded more than 2.9 million COVID-19 cases, including more than 89,000 deaths.

To date, the delta variant remains by far the most infectious and has crowded out other once-worrying variants, including alpha, beta and mu. According to sequences submitted by countries worldwide to the world’s biggest public database, more than 99% are delta.

Shortly after the announcement of the new strain's discovery, Israel said it has identified a case of a COVID-19 variant.

"The variant discovered in southern African states has been identified in Israel," the Health Ministry said, adding it was recorded "in a person who returned from Malawi," with "two more cases of people returning from abroad" placed in quarantine.

As Europe has been in the throes of surging cases and violent riots, wrestling with booster programs and dramatic lockdowns to stem the tide, European governments rushed on Friday to implement new bans on African countries to prevent the spread of the variants across the continent.

The British government announced that it was banning flights from South Africa and five other southern African countries effective from Friday and that anyone who had recently arrived from those countries would be asked to take a coronavirus test.

The U.K. Health Secretary Sajid Javid said there were concerns the new variant “may be more transmissible” than the dominant delta strain, and “the vaccines that we currently have may be less effective” against it.

"This is the most significant variant we have encountered to date and urgent research is underway to learn more about its transmissibility, severity and vaccine-susceptibility," Britain's health agency chief, Jennie Harries, said in a statement.

"As scientists have described, (this is) the most significant variant they've encountered to date in their research," Transport Secretary Grant Shapps told Sky News.

South Africa said on Friday a British ban on flights from six southern African countries seemed rushed as even the WHO was yet to advise on the next steps.

"Our immediate concern is the damage that this decision will cause to both the tourism industries and businesses of both countries," South African Foreign Minister Naledi Pandor said in a statement.

The Southern Africa Tourism Services Association (SATSA) said the British travel restrictions punished countries like South Africa with advanced genome sequencing capabilities. South Africa will speak to British authorities to try to get them to reconsider their decision, the Foreign Ministry added.

Meanwhile, Germany was preparing Friday to declare South Africa a virus variant area, a Health Ministry source said. The decision, which will come into effect from Friday night, will mean airlines will be allowed to fly only German citizens to the country from South Africa, according to the source. Returning Germans, even those who are vaccinated, will then have to spend 14 days in quarantine.

"This newly discovered variant worries us. That is why we are acting pro-actively and early here," Health Minister Jens Spahn said. "The last thing we need now is a new variant being introduced that causes even more problems."

"Our scientists are studying the new B.1.1.529 variant. In the meantime, we will adopt the greatest possible caution," Speranza said, according to Reuters.

The European Union's executive branch said Friday it wants to stop air travel from southern Africa to counter the spread of a new COVID-19 variant. European Commission President Ursula von der Leyen said in a statement that she "proposes, in close coordination with the member states, to activate the emergency brake to stop air travel from the southern African region."

Ahead of Thursday's announcement by scientists in South Africa, countries across Europe were already accelerating booster campaigns, enforcing stricter curbs and targeting the unvaccinated as cases multiplied to record levels.

Authorities in the Netherlands were preparing for new riots ahead of an expected announcement Friday by Prime Minister Mark Rutte to tighten a partial lockdown as it faces a critical hospital bed shortage with infections reaching record levels.

The country has suffered four straight days of anti-lockdown unrest, led by people Rutte described as "idiots," with the worst in the port city of Rotterdam where police opened fire on rioters, injuring five.

Germany, the Czech Republic and Portugal – which has one of the world's highest vaccination rates – all announced new measures in recent days to stem the tide of infections that has been worse than feared.

German Chancellor Angela Merkel issued an urgent warning to the country's incoming government on Thursday, saying "every day counts" as the country's death toll passed 100,000. Europe is stepping up its vaccination drive to beat back rising cases ahead of the encroaching winter.

On Thursday, France made booster shots available to all adults and the European Union's medicines agency has approved jabs for 5 to 11-year-olds.

In Asia, Singapore swiftly joined Britain and Italy, with the Health Ministry saying on Friday it would restrict arrivals from South Africa and countries nearby as a precaution. All non-Singaporeans and people without permanent residency in the city-state who have recent travel history to the seven countries will be barred from entering or transiting through Singapore, the Health Ministry said.

The new restrictions, which will take effect from Sunday, apply to South Africa, Botswana, Eswatini, Lesotho, Mozambique, Namibia and Zimbabwe, the ministry said.

After easing some of its travel restrictions earlier this month, India's central government issued an advisory to all states to rigorously test and screen international travelers from South Africa and other "at risk" countries. Asian countries have fared better than those in other regions in containing the pandemic by enforcing strict preventive measures, rigorous testing and strict border controls.

Taiwan said travelers from "high-risk" southern African countries will have to go into government-run quarantine facilities for 14 days.

Asked whether those plans would have to be delayed due to the new variant, Ardern said the country had "a number of inbuilt measures to act as a layer of protection."

"All of our planning around COVID, we have built into it the possibility of variants in the future," Ardern said in an interview for the upcoming Reuters Next conference.