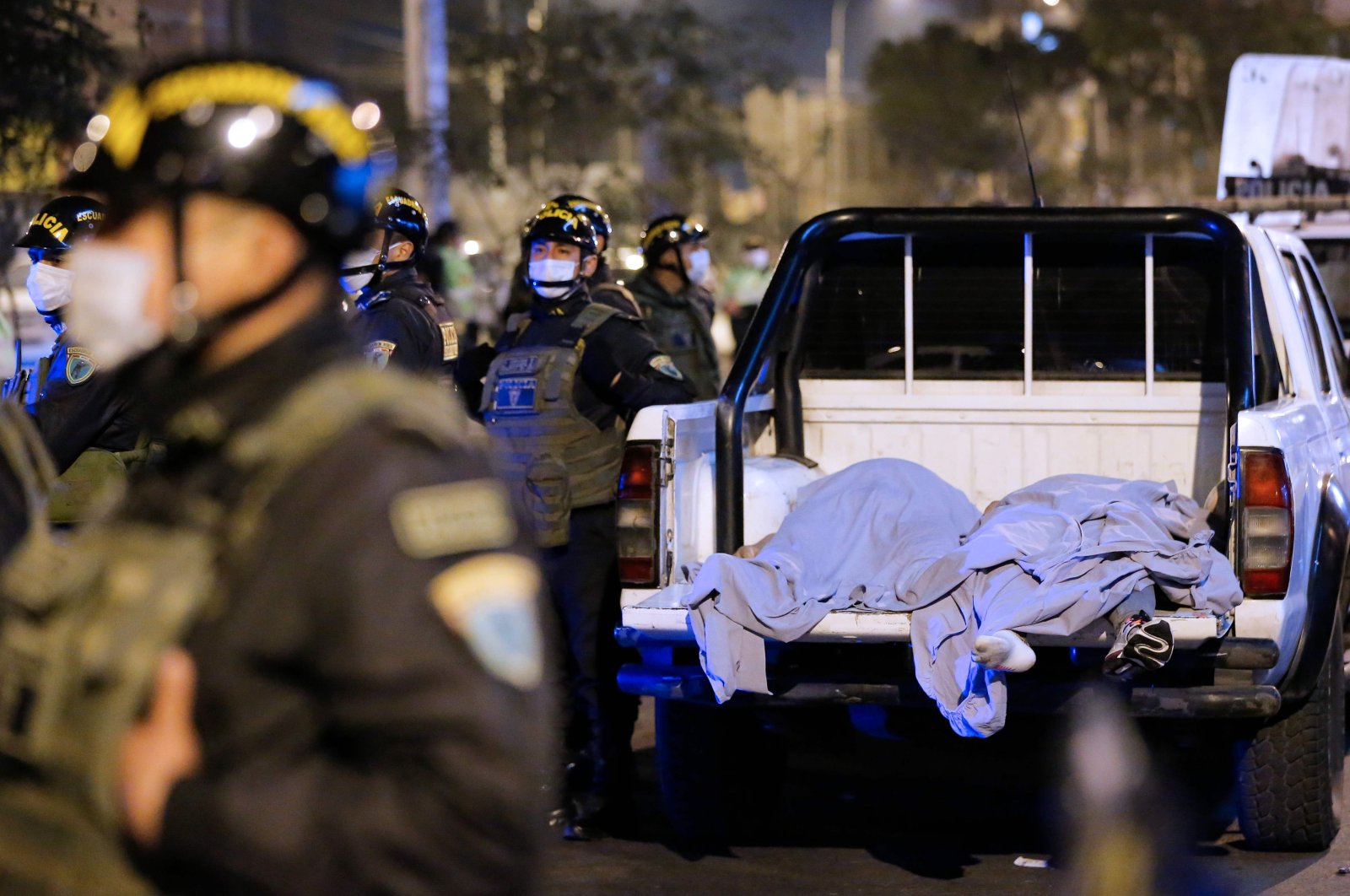 The bodies of some of the victims that suffocated in a crush during a raid on a nightclub in Lima, Peru, are seen on the back of a pickup truck outside the place where a party was being held despite a ban on such gatherings imposed to fight the coronavirus pandemic, Aug. 23, 2020. (AFP Photo)
by ASSOCIATED PRESS Aug 23, 2020 10:01 pm
RECOMMENDED

Thirteen people died in a stampede at a disco in Peru after a police raid to enforce the country's lockdown during the coronavirus pandemic, officials said Sunday.

The stampede happened at the Thomas disco in Lima, where about 120 people had gathered for a party on Saturday night, the Interior Ministry said.

People tried to escape through the only door of the second-floor disco, trampling one another and becoming trapped in the confined space, according to authorities.

After the stampede, police had to force open the door.

"I feel sorry for the relatives ... but also anger and indignation with the business people who organized the event,” Peruvian President Martin Vizcarra said at a public event in the south of the country. He urged judicial authorities to punish those who had broken the law.

Some 23 people were arrested, and 15 of those tested positive for the coronavirus and will be quarantined, Claudio Ramirez, a Health Ministry official, told reporters.

The party "was a breeding ground for the transmission of this disease, there was a viral load because it was a closed environment,” Ramirez said.

Franco Asensios, one of those who attended the party, told local radio RPP that the police raid started at 9 p.m. and that authorities told the party-goers to let the women exit first.

"People got excited and started to go down, and then they said that the people in front were suffocating,” said Asensios, who added that a friend who took him to the party had found out about it through social media.

Some people at the scene alleged that police fired shots and tear gas during the raid, but police chief Gen. Orlando Velasco denied it.

Alejandro Ruiz, a watchman on the street where the disco is, told RPP that parties had been held there previously.

"The noise could be heard two blocks away,” said Ruiz. When police cars passed by, people in the disco turned off the lights and lowered the volume of the music, he said.

The building in which the night club is located is dilapidated on the outside and is located in an industrial area in the Los Olivos district of Lima.

Felipe Castillo, mayor of the district, told local television N that the club was in his jurisdiction but that surveillance and supervision in the streets is "precarious” due to the effects of the pandemic, which include a reduction in the collection of taxes.

Night clubs have been prohibited from operating since March because of the pandemic. Peru started lifting quarantine restrictions on June 30 in an effort to get the economy moving again, and the daily reported number of virus infections has doubled to more than 9,000 in recent weeks.

Peru has reported about 27,500 deaths from the new coronavirus.