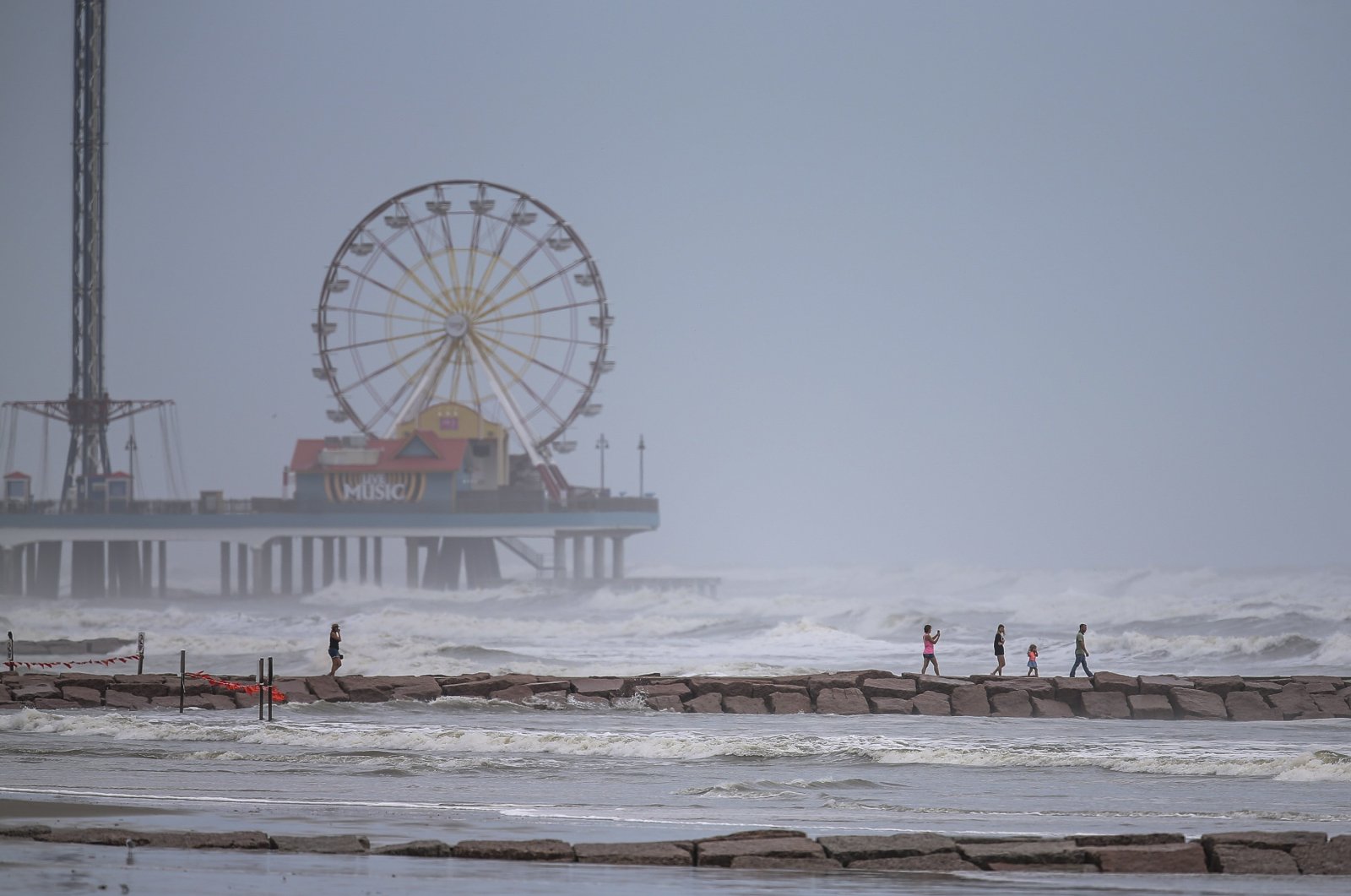 The deaths were all caused by trees falling on residences due to severe winds brought on by the "extremely dangerous" Category 4 hurricane, Edwards said.

The governors of Louisiana and Texas say search and rescue teams are still looking.

The National Hurricane Center said the storm made landfall near Cameron, Louisiana. It had maximum sustained winds of 240 kph (150mph), making it the most powerful hurricane to strike the U.S. so far this year.

The storm’s power has raised fears of a 6-meter (20-foot) storm surge that forecasters say would be “unsurvivable” and capable of sinking entire communities on the Texas and Louisiana coast.

Authorities had implored coastal residents of Texas and Louisiana to evacuate, but not everyone did before howling winds began buffeting trees back and forth in an area that was devastated by Rita in 2005.

Video and photos on social media showed torrents of rain flying sideways past street lights in Lake Charles, and streets covered with water closer to the coast. A sudden storm surge knocked over cameras meant to capture the hurricane’s effects.

With hours of violent weather ahead, officials said the extent of destruction likely wouldn't be clear until daybreak, when search and rescue missions will begin.

Drawing energy from the warm Gulf of Mexico, the system arrived early Thursday during high tide.

“It looks like it’s in full beast mode, which is not what you want to see if you’re in its way," University of Miami hurricane researcher Brian McNoldy said.

Early Thursday, Laura was churning about 65 kilometers south of Lake Charles and moving north-northwest at 24 kph.

Maximum sustained winds increased to 241 kph before nightfall, and forecasters said up to 38 centimeters (15 inches) of rain could fall. Forecasters issued a string of tornado warnings as the storm pushed on to land, but there were no immediate reports of damage. More than 100,000 homes and businesses were without power in Texas and Louisiana.

Officials said at least 150 people refused pleas to leave and planned to weather the storm in everything from elevated homes to recreational vehicles in coastal Cameron Parish, which could be completely covered by ocean water.

"It’s a very sad situation," said Ashley Buller, assistant director of emergency preparedness. "We did everything we could to encourage them to leave."

A Category 4 hurricane can render wide areas uninhabitable for weeks or months and knock out power for just as long. The threat of such devastation posed a new disaster-relief challenge for a government already straining under the coronavirus pandemic. The parts of Louisiana that were under evacuation orders included areas turning up high rates of positive COVID-19 tests.

The National Hurricane Center kept raising its estimate of Laura’s storm surge, from 3 meters just days ago to twice that size – a height that forecasters said would be especially deadly.

For some, the decision to leave home left them with no place to stay. Wary of opening mass shelters during a pandemic, Texas officials instead put evacuees in hotels, but Austin stopped taking arrivals before dawn because officials said they ran out of rooms. Other evacuees called the state's 211 information line and were directed to Ennis, outside Dallas, only to be told after driving hundreds of miles no hotels or vouchers were available.

Taniquia Ned and her sisters showed up without money to rent a room, saying the family had burned through its savings after losing jobs because of the coronavirus. "The COVID-19 is just totally wiping us out," said Shalonda Joseph, 43, a teacher in Port Arthur.

Edwards lamented that the storm meant the suspension of community testing for COVID-19 at a crucial time – as elementary and secondary schools in Louisiana open and students return to college campuses.

Laura was expected to cause widespread flash flooding in states far from the coast. Flood watches were issued for much of Arkansas, and forecasters said heavy rainfall could arrive by Friday in parts of Missouri, Tennessee and Kentucky. Laura is so powerful that it's expected to become a tropical storm again once it reaches the Atlantic Ocean, potentially threatening the Northeast.

Becky Clements, 56, evacuated from Lake Charles after hearing that it could take a direct hit. She and her family found an Airbnb hundreds of miles inland. Almost 15 years have passed since Hurricane Rita destroyed the city.

"The devastation afterward in our town and that whole corner of the state was just awful," Clements recalled. "Whole communities were washed away, never to exist again."

The hurricane also threatened a center of the U.S. energy industry as the majority of Gulf oil and natural gas production shut down. Consumers are unlikely to see big price hikes, however, because the pandemic has decimated demand for fuel.

Laura closed in on the U.S. after killing nearly two dozen people on the island of Hispaniola, including 20 in Haiti and three in the Dominican Republic, where it knocked out power and caused intense flooding.

Laura will be the seventh named storm to strike the U.S. this year, setting a new record for U.S. landfalls by the end of August. The old record was six in 1886 and 1916, according to Colorado State University hurricane researcher Phil Klotzbach.