5 killed, 40 injured after SUV plows through US Christmas parade 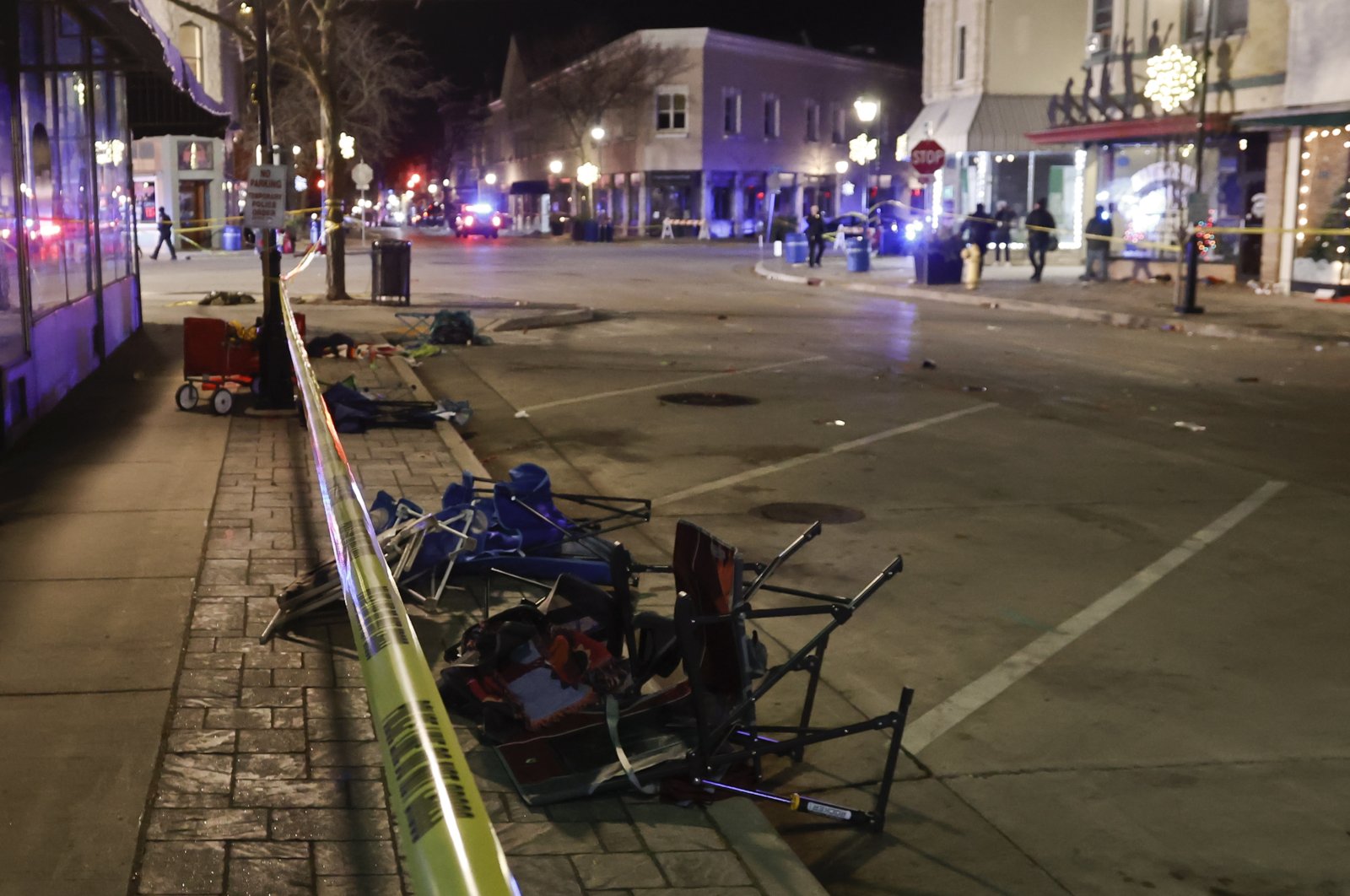 Debris left from crowds attending a Christmas parade lies scattered next to police crime scene tape after a SUV reportedly broke through a barricade and drove into people including children leaving several people dead and many more injured in Waukesha, Wisconsin, U.S., Nov. 21, 2021. (EPA Photo)
by REUTERS Nov 22, 2021 7:57 am
RECOMMENDED

At least five people died, 40 others were injured after a speeding vehicle plowed through a Christmas parade in Wukesha, Wisconsin late Sunday.

Waukesha Police Chief Dan Thompson said a person of interest was in custody and the suspect vehicle had been recovered after the incident in the town, about 20 miles (32 km) west of Milwaukee.

"The vehicle struck more than 20 individuals. Some of the individuals were children and there are some fatalities as a result of this incident," Thompson told reporters.

Asked about the fatalities, Thompson said: "I don't have an exact number at this time."

Authorities said they had taken 11 adults and 12 children to six area hospitals, with more transported to hospitals by family and friends.

It was not known whether the incident was related to terrorism, but an earlier shelter-in-place order in the town of around 72,000 had been lifted, Thompson added.

A video posted online showed a red sport utility vehicle plowing through the parade, appearing to run over more than a dozen people before crowds ran from sidewalks to offer assistance.

In another video, police appeared to open fire on the vehicle as it crashed through street barriers.

Thompson said an officer fired shots at the vehicle and no bystanders were injured. Earlier reports that shots may have been fired from the vehicle appeared incorrect, he added.

Belen Santamaria, her husband, and their three-year old daughter were planning to join the late afternoon parade with their Catholic Church. But Santamaria, a 39-year old Mexican factory worker, woke up on Sunday with a backache, so the family watched the procession from the sidewalk instead.

"The SUV came by at full speed," said Santamaria. "Then I started to hear people screaming."

She hid in a restaurant with their daughter while her husband, 39-year old delivery worker Jesus Ochoa, ran ahead to try to help injured people. He said he heard through other members of their church that roughly 10 members, mostly Latinos and both adults and children, are injured.

"I was going to be there, walking," Santamaria said. "The SUV would have hit us too."

A woman told Milwaukee's Fox6 TV station that the SUV hit a dance team of girls between 9 and 15 years old. She said the immediate reaction was silence, followed by screaming, running and checking on those injured, Fox6 reported. Video on social media showed small groups surrounding injured girls with white pompoms scattered around.

One witness said the driver also hit a group of "Dancing Grannies" and at least one person flipped over the hood of the SUV, according to Milwaukee's WISN-TV, an ABC affiliate.

"Members of the group and volunteers were impacted and we are waiting for word on their conditions," the Milwaukee Dancing Grannies said on their Facebook page. "Please keep the Grannies, all those injured, and all those who witnessed this horrible event in your thoughts and prayers."

The local CBS affiliate later showed a picture on Twitter of what appeared to be the red SUV involved with its hood crumpled and front fender hanging off, parked in a driveway.

Another witness estimated the SUV was going about 40 mph (64 kph) when it hit the crowd parading down the street, the TV station said.

"As we were walking back in between the buildings ... we saw an SUV cross over, just put the pedal to the metal and just zooming full speed along the parade route. And then we heard a loud bang, and just deafening cries and screams from people who are struck by the vehicle," Angelito Tenorio, an alderman in nearby West Allis, told the Milwaukee Journal Sentinel.

Photos and videos of Waukesha circulating on Twitter showed police cars and ambulances crowding a street decked out with Christmas lights in the aftermath of the incident, which occurred around 4:39 p.m. (2239 GMT). People bundled up against the cold huddled on sidewalks as dusk fell.

The Children's Wisconsin hospital said on Twitter it had received 15 patients as of 8 p.m., with no reported fatalities at that time.

Schools would remain closed on Monday for grades 4K-12 and additional counselors would be available for students who may need support services, the district superintendent of schools said.

In 2015, four people were killed and 46 injured in Stillwater, Oklahoma when a woman drove into a crowd watching the homecoming parade for a football team.

A truck was deliberately driven into a Christmas market in Berlin, Germany in 2016, killing 12 people in an attack linked to Daesh terrorists.