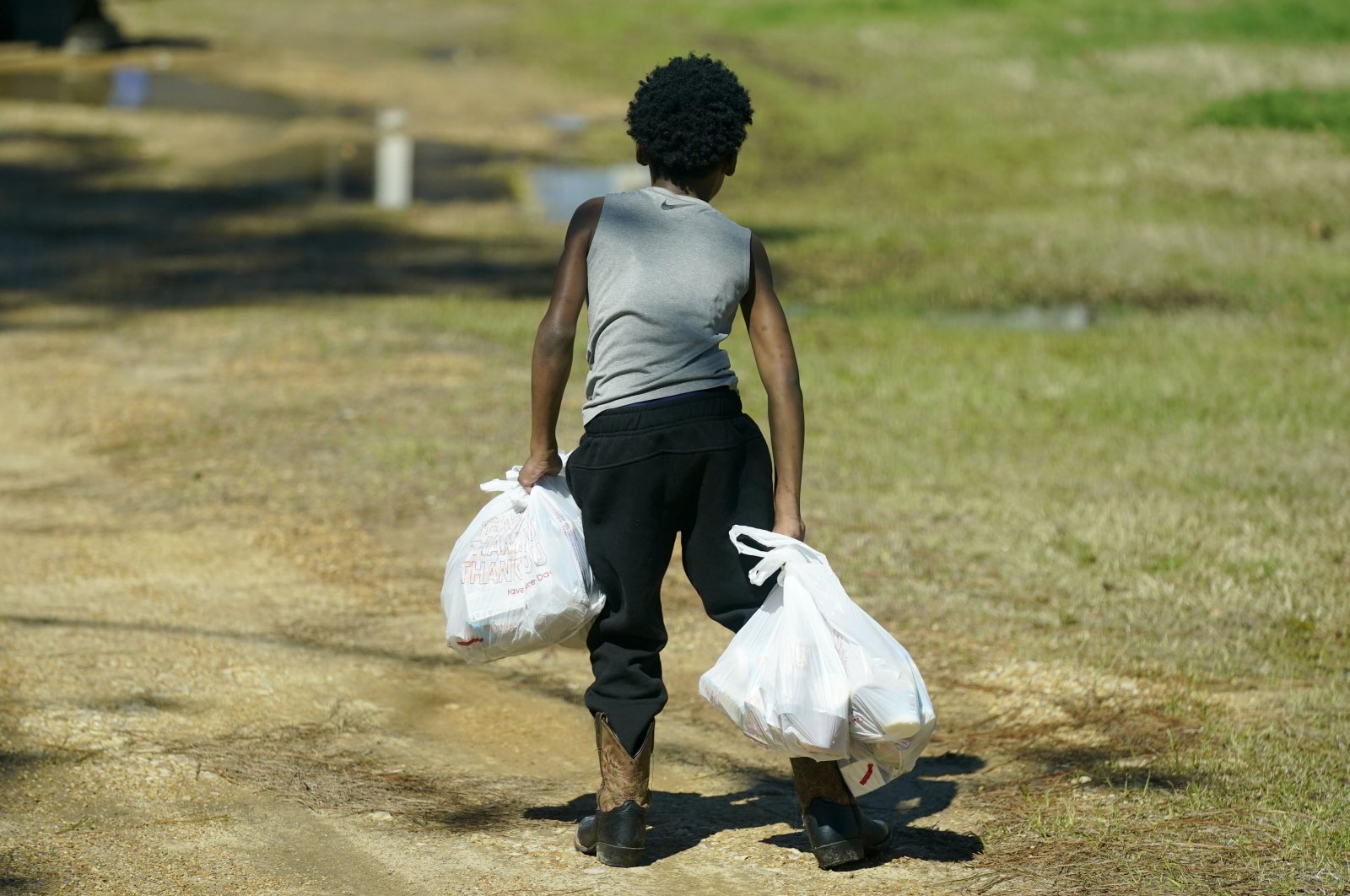 The coronavirus pandemic has triggered food insecurity and poverty among American society's less privileged, and children and older adults have been particularly effected, despite the government's measures to come out of the economic fallout.

Food banks around the U.S. continue giving away far more canned, packaged and fresh provisions than they did before the virus outbreak tossed millions of people out of work, forcing many to seek something to eat for the first time. For those who are now back at work, many are still struggling, paying back rent or trying to rebuild savings.

"We have all been through an unimaginable year,” said Brian Greene, CEO of the Houston Food Bank, the network’s largest. It was distributing as much as 1 million pounds of groceries daily at various points during the pandemic last year.

Data from Feeding America, a national network of most food banks in the U.S., shows that its members dispensed far more in the last three months of 2020 compared with the same period in 2019.

The food banks that agreed to let Feeding America publicly share their data, 180 out of 200 total, collectively distributed far more food – about 42% – during the last quarter of 2020 than in the same period of 2019. The amount of food allotted in the last quarter slipped just slightly from the previous three months, down around just 1%.

Katie Fitzgerald, Feeding America's chief operating officer, said the network's members are still seeing demand above pre-pandemic levels, although final numbers for this year's first quarter aren't yet available. Fitzgerald said she expects the food banks will collectively distribute the equivalent of 6 billion meals this year, about the same amount they gave away last year and far above the 4.2 billion meals given out in 2019.

"A lot of families who were living paycheck to paycheck before the pandemic were already experiencing food insecurity,” she said. "Now, the level of insecurity for some has grown more extreme, when you see real hunger – mom skipping meals to feed the family.”

America’s yearlong food insecurity crisis has been felt especially sharply by children who lost easy access to free school meals, and older adults who struggled to get groceries or meals at senior centers because they worried about contracting the virus.

"It got really ugly,” said Silvia Baca Garcia, 33, a Phoenix resident from Honduras who scrambled to feed her three children and granddaughter during months of unemployment caused by the viral outbreak. "It had been a lot easier when my two boys were in school and getting their hot breakfasts and lunches everyday.”

When COVID-19 fears shuttered schools around the U.S. last spring, school districts nationwide suddenly had to get food to students who rely on free lunches even in the best times.

The number of free meals districts served to children whose families meet income criteria fell sharply: Nationwide approximately 1.65 billion fewer breakfasts and lunches were served by child food service programs between March and November of 2020 than were served March through November of 2019 – a decrease of 30%.

"There are definitely a certain amount of students that are falling through the cracks,” said Reggie Ross, president of the School Nutrition Association, which represents school food service employees and food suppliers.

From rural to urban areas, districts have had to get creative to deliver the food to kids.

In Phoenix on a recent, hazy afternoon, grownups and kids lined up by a yellow school bus for bags of free food.

The tiniest kids balanced multiple bags as they trudged home to apartments nearby, an occasional apple or juice box tumbling onto the asphalt. A young woman stuffed bags of food under her toddler’s stroller seat.

"This has been important because most refugees don’t have a ride,” said Sinthia Rehmet, originally from Pakistan. She was among those picking up bags containing small milk cartons, peanut butter, hamburgers and precooked meals to be reheated.

The Alhambra School District in Phoenix went from serving 6,000 free breakfasts and 9,600 free lunches every day before the pandemic down to about 2,500 meals overall daily, said Brienne Berg, the district’s child nutrition coordinator. Berg said about 5,000 of the district's estimated 10,000 students returned to campuses in March while a similar number were signed up to continue remote learning.

For Baca Garcia, the struggling Phoenix mother, without a car, it was often difficult to pick up the packages of food the kids’ school was offering while the campus was closed. Fortunately a neighborhood church ensured the family always had something to eat. She's now relieved to be working as a hotel housekeeper and her sons Hugo, 14, and Adrian, 6, have returned to classes and two hot meals a day at the district's Valencia Newcomer School.

In Mississippi’s impoverished Jefferson County, t he school district for months has used aging school buses to deliver meals to the homes of remote learners. All 1,100 students in the district qualify for free school meals.

As districts reopen, including some with hybrid models where kids don't attend in person every day, schools are trying to ensure their access to food is consistent. As New York City works to get kids back in school, the school district has made students’ meals available at pickup sites in the mornings. In the afternoons, families can also get free packaged meals and snacks available to the whole community.

Jennel Jerome, a New York school district supervisor, worries about students’ nutrition when they aren’t in class where staff can make sure they eat lunch and encourage them to grab an extra milk or fruit if they are still hungry.

"Now that we’re not seeing them, there is that concern: what are they really getting to eat?” she asked.

The USDA has announced that during summer recess it will extend flexible food programs providing free meals to all children across the U.S. regardless of income.

Since the pandemic began, many older adults in the U.S. have turned to food banks, Meals on Wheels home deliveries and other charities to get enough to eat.

Daily meals at the local senior center are no longer an option during shutdowns and going to the grocery store may be dangerous. Many older people are cut off from family and friends trying to keep them safe.

Meals on Wheels programs that deliver food to homes were flooded with calls, while other programs also popped up to feed older adults nationwide. Meals on Wheels America said at the end of 2020 its branches nationwide were still serving on average 60% more seniors than before COVID-19.

Over $1.68 billion in emergency funding has gone to nutrition programs under the Older Americans Act to pay for food, gas and drivers to deliver meals, along with masks, gloves and sanitizer to protect staff.

Jackie Robinson, a 66-year-old retired cook who once worked at a French Quarter restaurant in New Orleans, struggled to get by on his Social Security benefits before the pandemic, occasionally visiting a food pantry. But over the summer he signed up for a city-run delivery program and now gets two meals a day, seven days a week.

"Things were getting kind of tough, a little rough and ... I needed a little extra assistance,” he said.

The New Orleans program pays local restaurants to make food that is delivered to people who qualify. It feeds 11,200 people including about 4,000 seniors and is a partnership between the city and FEMA designed to get food to people at a time when they were being encouraged to stay home. It isn’t restricted to older adults, but officials had them in mind when they launched it last summer.

It's been renewed monthly since its inception in July. The city is planning a survey to get a sense of who will need help once the program ends so they can help them with things like applying for SNAP benefits or finding other food services.

New Orleans resident Helen Smith Green, 76, uses a walker to get around and depended on her 96-year-old mother to cook for both of them before the older woman fell and went to an assisted living facility. Green now gets meals through the New Orleans program. Separately, she also gets a monthly food box delivered.

"I’m very thankful for these meals. It makes a big difference in your life, you know,” she said.

With vaccinations hopefully hastening an end to the pandemic, advocates working with older adults who are food insecure worry the increase in clients won’t abate when the outbreak does.

Economic recovery for people over 60 could be slower and more difficult. It’s often harder for unemployed older adults to find work and they have fewer years to pull themselves out of poverty exacerbated by the pandemic.

Erin Kee who tracks nutrition issues for the National Council on Aging, said even before the pandemic only about half of the older adults eligible sign up for the Supplemental Nutrition Assistance Program, which lets people buy groceries at a store. While some don’t know about the program, others are ashamed to use it or struggle with the paperwork, she said.

Robert Blancato, executive director of the National Association of Nutrition and Aging Services Programs, said in a January survey that 90% of its members were still serving more people than before the pandemic, and most worried funds would run out.

"Once the pandemic ends, people go back to their normal business, and again, seniors won’t be on the radar,” said Al Robichaux who heads the Jefferson Parish Council on Aging based in the New Orleans suburbs.

Terry and Barbara Jackson, who live in the town of Marrero, count on the home meals they started receiving from the council’s delivery program. He is blind and has diabetes and congestive heart failure while his wife suffers from Alzheimer’s and dementia.

"We get Social Security and disability, both of us,” Terry Jackson said. "It barely gets us by."