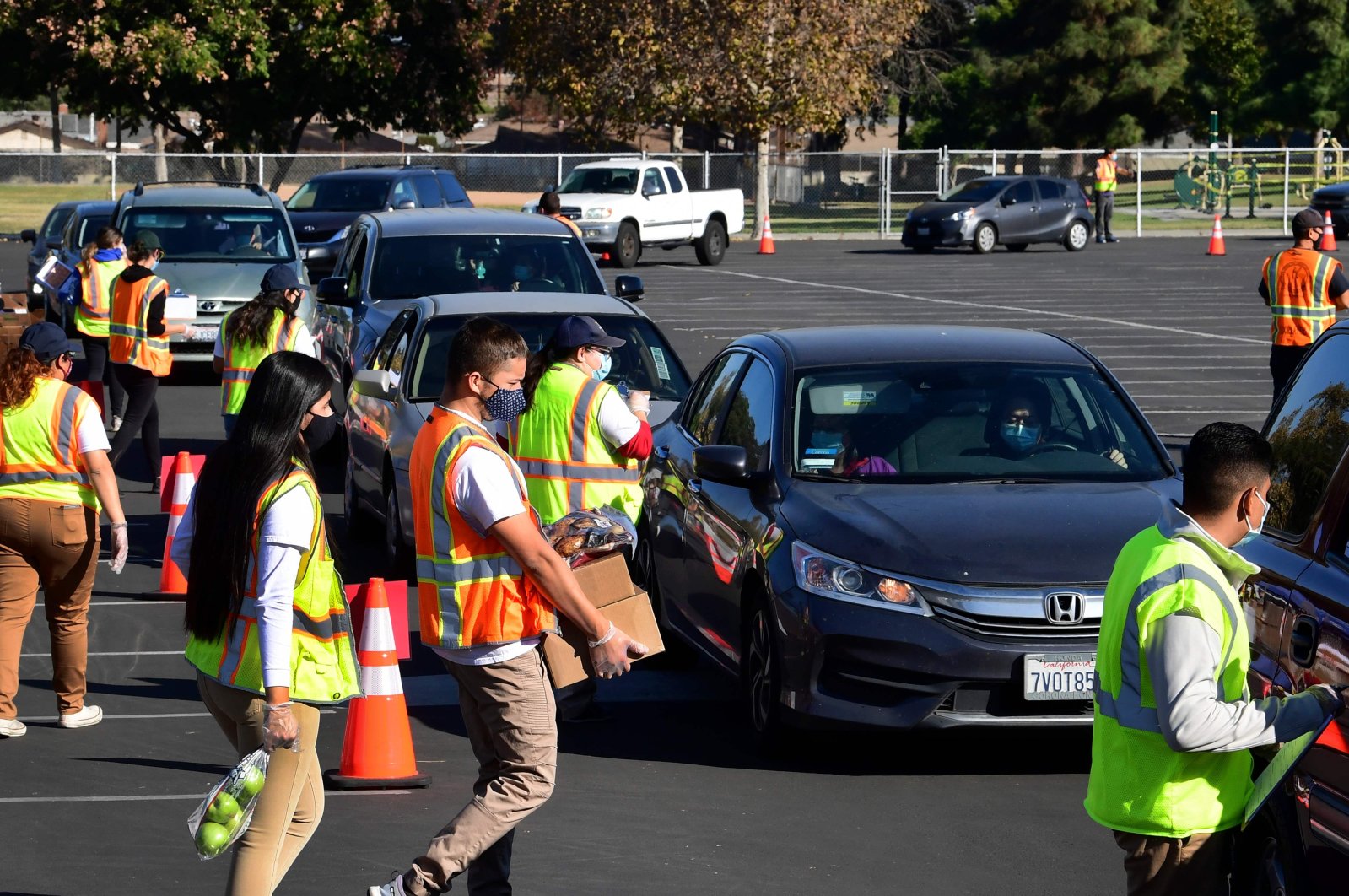 Food is loaded as drivers in their vehicles wait in line on arrival at a "Let's Feed LA County" food distribution hosted by the Los Angeles Food Bank in Hacienda Heights, California, on Dec. 4, 2020. (Photo by Frederic J. BROWN / AFP)
by ASSOCIATED PRESS Dec 07, 2020 7:23 pm
RECOMMENDED

The deadly pandemic that tore through the nation’s heartland struck just as Aaron Crawford was in a moment of crisis. He was looking for work, his wife needed surgery, then the virus started eating away at her paycheck.

The Crawfords had no savings, mounting bills and a growing dread: What if they ran out of food? The couple had two boys, 5 and 10, and boxes of macaroni and cheese from the dollar store could go only so far.

A 37-year-old Navy vet, Crawford saw himself as self-reliant. Asking for food made him uncomfortable. "I felt like I was a failure,” he says. "It’s this whole stigma ... this mindset that you’re this guy who can’t provide for his family, that you’re a deadbeat.”

Hunger is a harsh reality in the richest country in the world, even during times of prosperity. Now, with staggering job losses and business closings, millions of Americans are worried about empty refrigerators and barren cupboards.

Feeding America, the nation's largest anti-hunger organization, has never handed out so much food so fast, 4.2 billion meals from March through October. The organization has seen a 60% average increase in food bank users during the pandemic and about four in 10 are first-timers.

An Associated Press analysis of Feeding America data from 181 food banks in its network found the organization has distributed nearly 57% more food in the third quarter of the year, compared with the same period in 2019.

Those fighting hunger say they’ve never seen anything like this in America, even during the Great Recession of 2007-2009.

Across the country, cars line up for miles to wait for food handouts, each driver waiting hours for a box or bag of food. In New York and other large cities, people stand, waiting for blocks on end.

Shortly before Thanksgiving, Norman Butler and his girlfriend, Cheryl, arrived at 3 a.m. at a drive-through food bank in a suburban New Orleans sports stadium. They joined a pre-dawn procession of mothers with their kids, the elderly and folks like him – unemployed workers.

Before the pandemic, Butler, 53, worked as an airport shuttle and limousine driver, a valet and hotel doorman. Since March when the normally bustling streets turned silent, jobs have been scarce in the city.

"A lot of people are in limbo,” he says. "The main thing we need is to get back to work.”

For communities of color, the pandemic has been a compound disaster with Blacks and Latinos reeling from disproportionately high rates of deaths, infections and joblessness.

Unemployment surged among Latinos to 18.9% this spring, higher than any other racial and ethnic group, according to federal statistics. Though it has since fallen, many are still struggling.

More than one in five black and Latino adults with children said as of July 2020 they sometimes or often did not have enough to eat, according to a September report commissioned by the Food Research & Action Center. That was double the rate of white and Asian households. It also found that women, households with children and people of color are at the greatest risk of hunger.

Abigail Leocadio, 34, who was brought to the U.S. from Mexico by her family when she was 7, works as a phlebotomist in a local lab. Her husband, a restaurant cook, was unemployed for months during the outbreak.

Leocadio's income, barely more than the $11 state minimum wage, wasn’t enough to cover their expenses. They pay $500 a month to rent a lot for their two-bedroom trailer, and as much as $450 in monthly electric bills and internet service so their four kids, 9 to 15, can attend class remotely.

"It has been hard feeding all the kiddos daily,” Leocadio said outside the trailer after a recent delivery from the Society of St. Vincent de Paul in Phoenix, Arizona. The family recently received two boxes from the charity, including canned tomatoes, dried beans, rice, breakfast cereal and the kids’ undisputed favorite: specialty Oreo cookies.

The food, she says, provides less than half of what her family eats in four weeks, but reduces their monthly bill to about $250.

While food banks have become critical during the pandemic, they’re just one path for combating hunger. For every meal from a food bank, a federal program called the Supplemental Nutrition Assistance Program, or food stamps, provides nine.

Anti-hunger groups have lobbied Congress for a 15% increase in maximum food stamp benefits. A similar measure went a long way in digging the nation out of the Great Recession. A stimulus bill passed by the House this spring includes such a provision but it has been bogged down in partisan squabbling.

Many going to food pantries are also receiving food stamps, though eligibility varies among states.

Aaron Crawford says the addition of $550 in food stamps the family started receiving last summer has made a significant difference as they've faced their own medical troubles. Both he and his wife, Sheyla, had mild cases of COVD-19 and she had hysterectomy surgery.

The family also has depended on the Family Resource Centers and Food Shelf, part of 360 Communities, a nonprofit 15 minutes from their apartment in Apple Valley, Minnesota.

When needed, they receive monthly boxes of fresh produce, dairy, deli, meat and other basics – enough food to fill two grocery carts. If that runs out, they can receive an emergency package to tide them over for the rest of the month.

At first, Crawford was embarrassed to go to the food shelf as he worried he’d bump into someone he knew. He now sees it differently.

"It didn’t make me a bad man or a terrible husband or father,” he says. "On the contrary, I was actually doing something to make sure that my wife and kids had something thing to eat.”