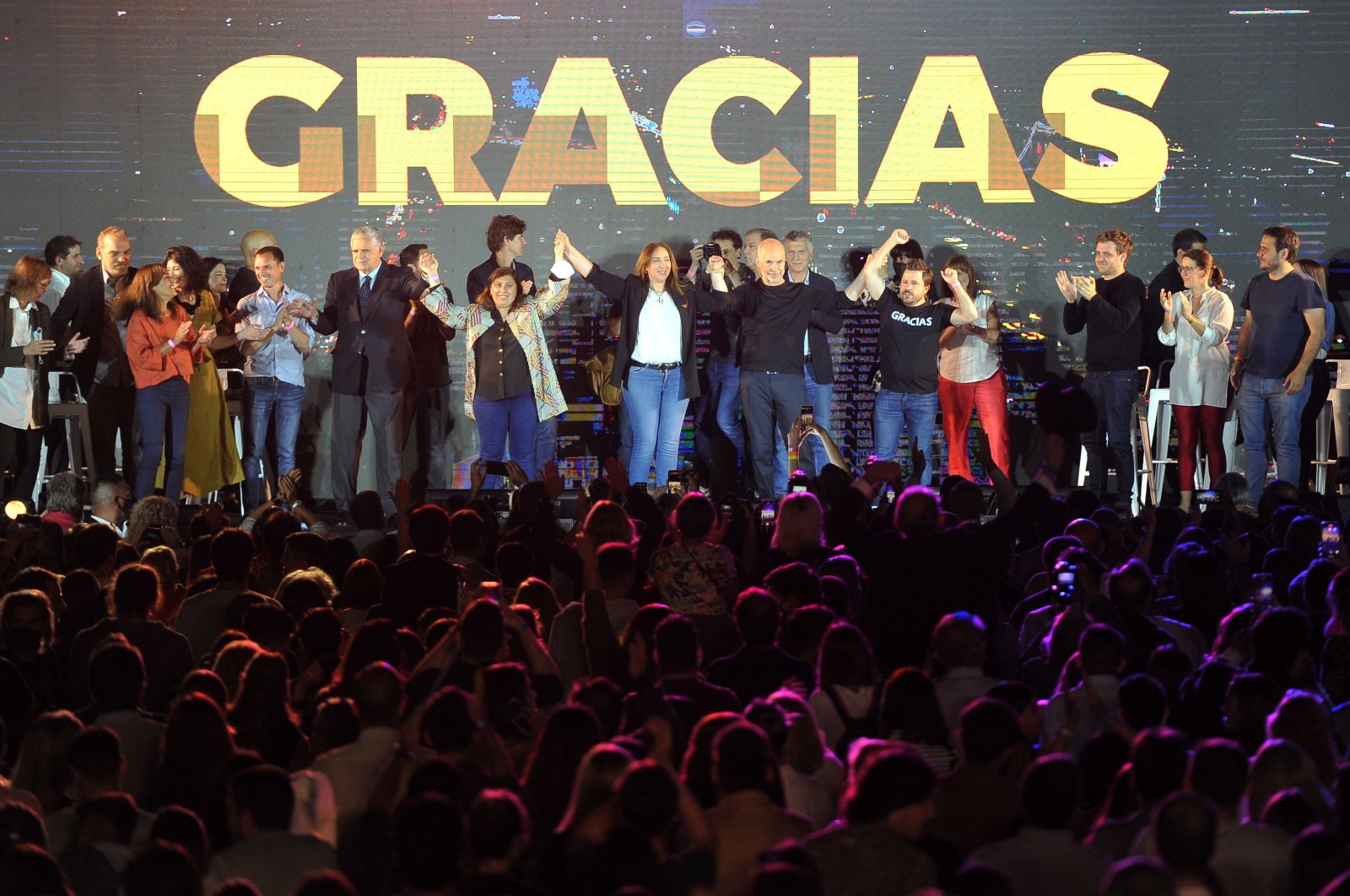 Members of Juntos por el Cambio (Together for Change) celebrate having won the legislative elections in the main districts of the country, in Buenos Aires, Argentina, Nov. 14, 2021. (EPA Photo)
by ASSOCIATED PRESS Nov 15, 2021 8:23 am
RECOMMENDED

The opposition celebrated as President Alberto Fernandez suffered a heavy loss in Argentina's midterm elections Sunday amid widespread anger over high inflation and rising poverty, with his governing coalition losing control of the Senate and threatened with falling from its position as the biggest bloc in the Chamber of Deputies.

The triumph by the center-right coalition Together for Change will mean a tough final two years in office for the president, who must deal with the acute social crisis and also seek a debt refinancing agreement with the International Monetary Fund to stabilize the economy. It could also intensify divisions within the governing coalition.

Fernandez's Front for Everyone coalition, which is made up of a collection of Peronist and leftist parties, has been able to pass laws by controlling the Senate while relying on support from independents in the lower house, where the coalition held a strong minority.

According to the official count, the opposition got 40.1% of the votes in Buenos Aires province, which is the country’s biggest population center, while the president’s coalition got 38.4%. Together for Change also led in Santa Fe, Cordoba and the city of Buenos Aires, other districts with important electoral weight.

Voters chose 127 deputies, representing half of the seats in the Chamber of Deputies, and 24 senators in eight provinces, which is a third of the upper house.

The result was seen as a "punishment” vote against the Fernandez government for the unemployment and other hardships that have accompanied a 10% fall in Argentina's economy last year along with continuing high inflation. More than 40% of the country's 45 million inhabitants live in poverty, unemployment is close to 10% and inflation in October ran at an annual rate of nearly 42%.

María Eugenia Vidal, a leader in the opposition coalition who was elected to the Chamber of Deputies for Buenos Aires city, said she was moved by the result.

In a recorded message, Argentina's president acknowledged he had made mistakes, but he said the economy is growing around 9% this year and predicted the 2020 loss would be made up by early in 2022. Fernandez said that would put an end to "a very hard stage” brought by the recession, which he blames on his predecessor, and by the coronavirus pandemic.

The government was also hurt by perceptions of rising insecurity and a series of scandals including violations by Fernandez and those close to him of pandemic health restrictions. He has also had public disagreements with this vice president, former President Cristina Fernandez.

Analysts said both politicians, who are not related, are in for a tough time.

"Both Fernandez and Cristina will be weakened. Tensions between the two will rise further, but a total breakup leading to resignations is unlikely," said Daniel Kerner, director for Latin America at consultancy Eurasia Group. "Fernandez is a weak and unpopular president and, if she were to resign she would be left with limited popular support and constant and lasting opposition for Cristina and her group.”

A difficult obstacle is the need for an agreement with the IMF to refinance the debt for some $45 billion left by the previous government, which was led by conservative President Mauricio Macri in 2015-2019.

Cristina Fernandez promoted the presidential candidacy of Fernandez in his successful run to defeat Macri in the 2019 elections, but they have differed on economic policy and the IMF negotiations. The president advocates not delaying an agreement with the IMF to calm financial markets, which would imply cuts in public spending that clash with his vice president’s more populist vision.

"The government is going to have to rethink many things. Peronism never governed in a coalition before,” said Roberto Bacman, director of the Center for Public Opinion Studies. "Peronism has to find its own internal mechanism to define the course, the economic plan, how we end the issue of the Monetary Fund.”