Biden at 264 electoral votes, Trump at 214 as US vote counts continue 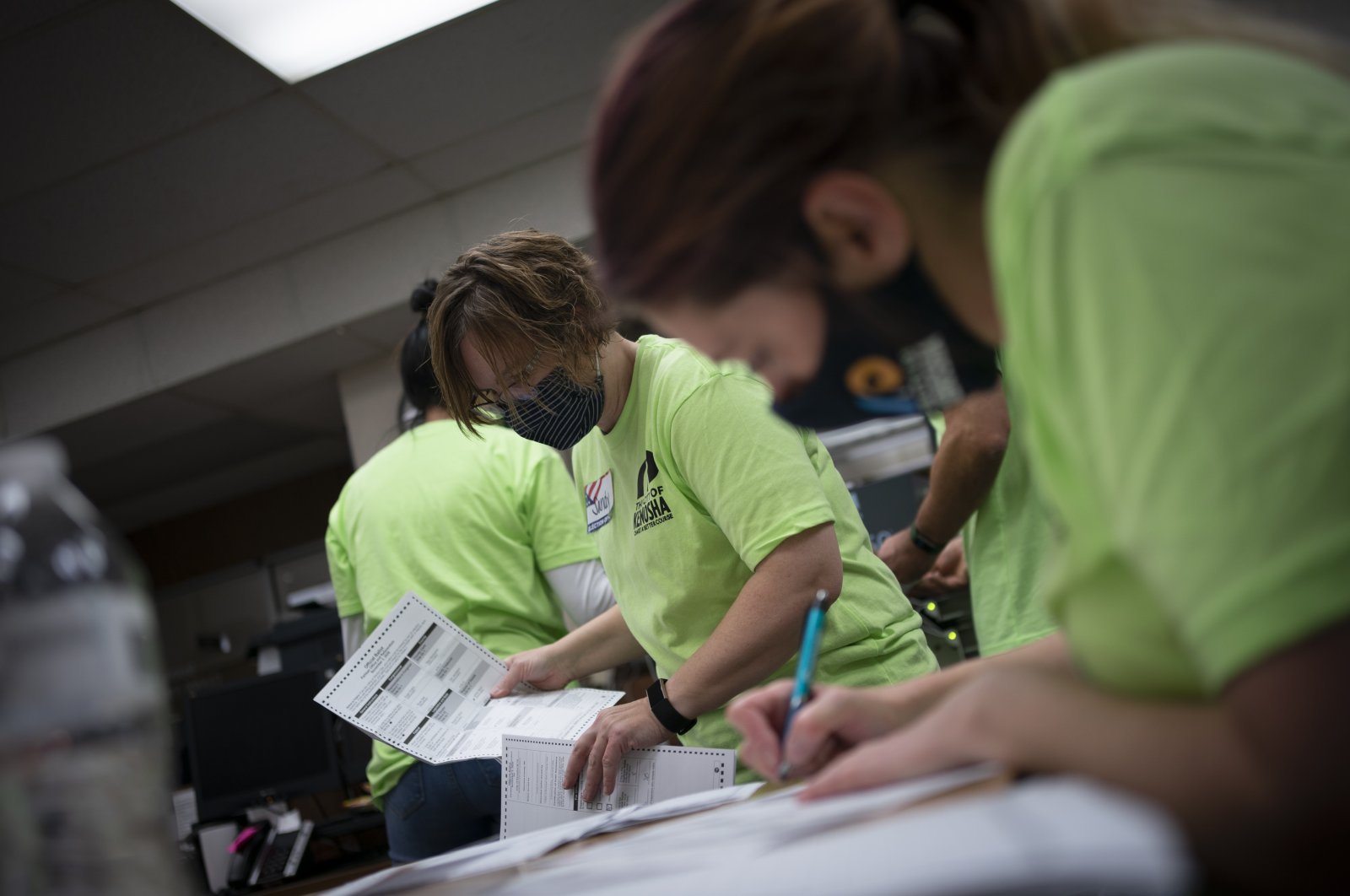 As it stands, there are five states still left uncalled, including major prizes such as Pennsylvania, and key small state Nevada – meaning both Trump and Biden still have a path to victory.

U.S. media outlets have projected wins for the Republican incumbent in 23 states including big prizes Florida and Texas, as well as Indiana, Kentucky, Missouri and Ohio – all states he won in 2016.

Biden has captured 22 states including his home state Delaware and big prizes California and New York, as well as the U.S. capital.

The former vice president has flipped three states won by Trump in 2016 – Arizona, Michigan and Wisconsin.

Nebraska split its electoral votes between the two – four for Trump and one for Biden. Maine was won by Biden, but he seized only three of the four electoral votes on offer, with the last allocated to Trump.

The magic number of electoral votes is 270. If Biden were to win in Nevada, he would in theory have the necessary 270.

Hopes among Democrats that election night would see a swift and crushing victory for Biden quickly evaporated. Despite a pandemic that has killed more than 230,000 Americans, an embattled U.S. economy, and chaotic foreign policy, Trump's pugilistic governing style and "Make America Great Again" slogan has found favor with large swaths of the country.

Meanwhile, Trump took to Twitter to claim his opponents are trying to "steal the election," though he offered no proof. Twitter restricted access to the post, saying parts or all of the message are disputed.

"We are up BIG, but they are trying to STEAL the Election. We will never let them do it. Votes cannot be cast after the Polls are closed!" Trump wrote on Twitter, after a period of several hours of silence on social media.

On Wednesday, the Trump campaign also filed a lawsuit in Michigan to halt the counting of ballots as the tally showed Biden leading in the battleground state.

"We have filed suit today in the Michigan Court of Claims to halt counting until meaningful access has been granted. We also demand to review those ballots which were opened and counted while we did not have meaningful access," the campaign said in a statement.

The Trump campaign then said it would also be suing to stop vote counting in the battleground state of Pennsylvania over a "lack of transparency." The campaign claimed Democratic officials have been "hiding" ballot counting from Republican poll observers.

Just minutes later, Stepien declared the president's "victory" in Pennsylvania despite only about 85% of the votes having been counted and no definitive projections from news networks.

There is an expectation that some states or counties may see their elections end up in court.

Already, the U.S. Postal Service failed to meet a deadline imposed by a federal judge to conduct physical sweeps of mail-processing facilities in several battleground states to ensure no mail-in ballots were left unsent.

Both Trump and Biden have prepared platoons of lawyers to fight for the side.

For many voters, the key issues in the election are the pandemic, the economy and health care, along with more specific areas such as gun rights and control, the environment, and abortion.

Trump is running as a conservative, while Biden has embraced some progressive ideas, but has mainly pitched a wide tent, trying to build a broad coalition.

The U.S. presidential election is being decided by about a dozen states that could have swung to either Trump or Biden.

These states will play a critical role in delivering the 270 Electoral College votes needed to win the White House. Due to a surge in mail voting amid the coronavirus pandemic – as well as the states' varying rules for when ballots can be counted – the final results for all the states are expected to take days to be revealed.

Vote counting: Arizona has no-excuse absentee voting. All ballots had to arrive by the close of polls on Election Day. Ballots could be scanned and tabulated starting 14 days before Tuesday but results not reported until after polls closed on Election Day.

Other key races: The race for one U.S. Senate seat will proceed to a two-way runoff between a Democrat and a Republican. The other race is considered competitive.

Vote counting: Georgia has no-excuse absentee voting. Ballots had to be received by clerks by the close of polls on Election Day. Ballots could be opened and scanned on receipt, but they could not be tallied until after the polls closed on Tuesday. Officials in Fulton County, home to Atlanta and a tenth of all Georgians, warned on Tuesday that its vote count would not be finalized until Wednesday after a burst pipe delayed absentee-by-mail ballot processing for at least two hours, according to local reports.

Other key races: Competitive U.S. House contests in the 1st and 10th Districts

Vote counting: Pennsylvania has no-excuse absentee voting, and ballot counting could begin at 7 a.m. on Election Day. Last week, the U.S. Supreme Court let stand a ruling by Pennsylvania’s top court that officials in the state could accept mail-in ballots three days after Tuesday's election, so long as they were postmarked by Election Day. Election officials in Philadelphia, the state's largest county and a Democratic stronghold, said on Tuesday evening they expected to release more results between midnight and 1 a.m. EST (0500 and 0600 GMT) on Wednesday, with more updates later that morning.

Other key races: No governor or U.S. Senate races on the ballot

Vote counting: Wisconsin has no-excuse absentee voting. The state's election officials cannot count mail-in ballots that arrive after Election Day, the U.S. Supreme Court ruled on Oct. 26. Ballots could not be counted until polls opened on Tuesday. The Board of Elections director in Milwaukee County, the state's most populous, said on Tuesday evening that the county's presidential vote count would not be completed until at least 6 a.m. EST on Wednesday due to the amount of absentee ballots received.

Vote counting: Michigan has no-excuse absentee voting. Ballots had to arrive at clerks' offices by the close of polls on Election Day. Some densely populated jurisdictions in the state, such as Detroit, began sorting absentee ballots on Monday, but the vast majority did not. Clerks could begin scanning and counting absentee ballots at 7 a.m. on Tuesday. Michigan Secretary of State Jocelyn Benson said on Tuesday evening that she expected a fuller picture of the state's results in 24 hours, ahead of early projections. She said absentee ballots could top 3.3 million, while in-person voting ends at 2 million to 2.5 million.

Other key races: Competitive U.S. Senate contest has not been called. Democratic Governor Roy Cooper appears to have won re-election.

Vote counting: North Carolina has no-excuse absentee voting. Absentee ballots could be scanned weeks in advance, but results could not be tallied before Election Day. In a blow to Trump, the U.S. Supreme Court declined last week to block the state's plan to tally ballots that are postmarked by Tuesday and arrive by Nov. 12.

Other key races: No governor or U.S. Senate contests on the ballot

Vote counting: Nevada has no-excuse absentee voting, and ballots can be processed upon receipt. Nevada officials could begin scanning and recording ballots 14 days before the election, but results are not released until election night. Ballots postmarked by Tuesday will be counted so long as they arrive within seven days after the election.

Vote counting: Texas voters must qualify to vote by mail, for example by being older than 65, being ill or disabled, or not being present in their voting county during the early voting period through Election Day. All voters could vote early in person. The population of a county determined when election officials could pre-process and count mail ballots. If the county has more than 100,000 people, the ballots could be counted after polls closed on the last day of in-person early voting in the state, which was Oct. 30. Ballots will still be counted if they were postmarked by Tuesday and are received by 5 p.m. on Wednesday. For military and overseas voters, that deadline is extended through the end of business on Nov. 9.

Vote counting: Iowa has no-excuse absentee voting. The ballots had to be received by the close of polls on Election Day, or by noon the following Monday if they were postmarked by Nov. 2. Election officials were allowed to begin opening ballot envelopes on the Saturday before the election and begin scanning and tabulating them on Monday.

Vote counting: Florida has no-excuse absentee voting. Election officials could begin scanning ballots more than three weeks before Election Day, but results could not be generated until after polls closed. All ballots had to be received by the close of polls on Election Day to be counted. Ballots flagged for signature errors can be corrected, however, until 5 p.m. on Thursday.

Other key races: U.S. Representative Steve Chabot, a Republican, appears to have won re-election in the 1st District.

Vote counting: Ohio has no-excuse absentee voting. Ballots could be scanned, but not tallied, as early as Oct. 6. Absentee ballots were the first to be counted on election night. Mail ballots had to be postmarked by Monday and received by 10 days after Tuesday's election to be counted.

Other key races: Governor Chris Sununu, a Republican, appears to have won re-election.

Vote counting: New Hampshire state officials have said all voters are able to cast an absentee ballot if they have concerns about COVID-19, and the ballots had to be received by 5 p.m. on Election Day. Ballots could be pre-processed in some jurisdictions beginning on Oct. 29, but not counted until the polls closed on Tuesday.

Other key races: Competitive contests for the U.S. Senate and U.S. House in the 1st and 7th Districts

Vote counting: Minnesota has no-excuse absentee voting, and ballots must be pre-processed within five days of receipt. Beginning on Oct. 20, ballots could be opened and logged, but the results were only tabulated after polls closed on Election Day. A federal appeals court ruled last week that the state's plan to count absentee ballots received after Election Day was illegal.