Brazil suffers from poverty as COVID-19 pandemic aid dries up 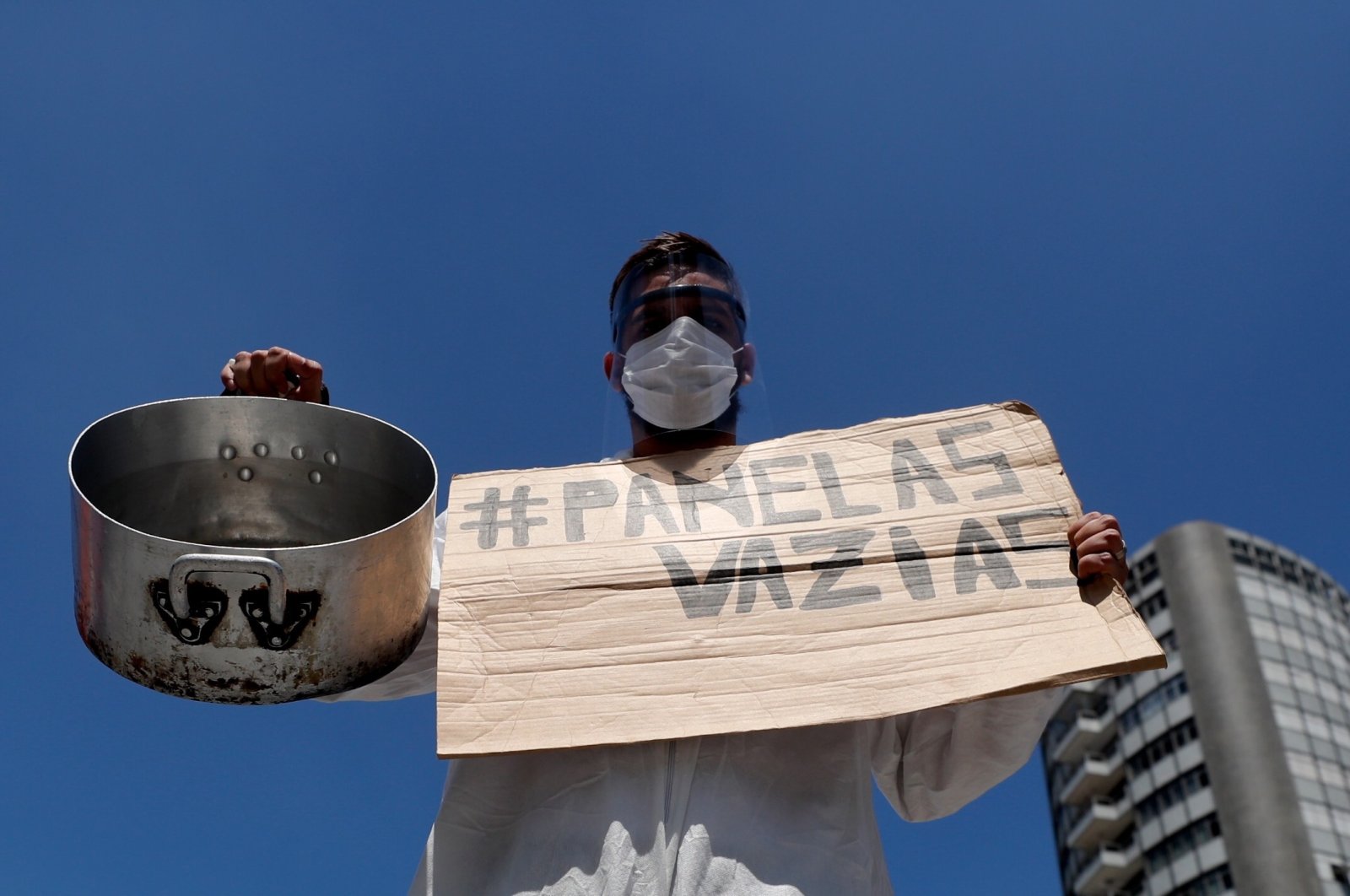 Residents of the Paraisopolis favela protest to demand that the Government of Jair Bolsonario not stop state aid amid the crisis derived from the COVID-19 pandemic, with banners that read '#EmptyPots', in Sao Paulo, Brazil, March, 26, 2021. (EPA Photo)
by REUTERS Mar 26, 2021 8:46 pm
RECOMMENDED

Sirqueira lives by a landfill less than a mile from the Planalto presidential palace in Brasilia, along with 36 other families, and scrapes together cash by recycling trash.

She is one of Brazil's 40 million or so "invisibles," a term coined by Economy Minister Paulo Guedes for those without formal employment who had flown largely under the radar of Brazil's government - and society.

"I live beside the president. I see him and his security pass by here every day," she said on a hot, dusty afternoon outside her improvised shack. "How can he pass here every day and not see the families here?"

Last year, however, Sirqueira was not invisible. From April to December, she and some 66 million other Brazilians received the government's most generous cash transfer program ever, emergency aid to help the most vulnerable through the pandemic.

Nearly $60 billion burst of basic income softened the economic blow of the coronavirus, boosted Bolsonaro's popularity and beat back poverty - but its expiration at the end of 2020 is unraveling many of those effects.

Sirqueira now relies on the pre-existing 'Bolsa Familia' social benefit of up to 205 reais ($36) a month, about a third of last year's emergency aid, missing out on a smaller second round of the cash transfer program that starts in April.

"They said I no longer met the criteria and so I can no longer be part of the program. My life has gotten much more difficult since, with six children to raise," she said.

Millions of Brazilians like her were briefly lifted out of poverty only to be tossed back again. The national poverty rate dropped suddenly to 4.5% in August from almost 11% at the start of 2020, calculates the Getulio Vargas Foundation.

However, the Rio de Janeiro-based think tank estimates that 12.8% of Brazil's population - some 27 million people - are now living below the poverty line of 246 reais a month, the most since the series began a decade ago.

The economic impact of the aid was matched by its political punch, reversing Bolsonaro's dwindling popularity as the first wave of COVID-19 hit and winning him record approval among the country's poorer classes and regions, which has since retreated.

Pollster Datafolha showed disapproval of Bolsonaro in Brazil's poorer northeast outpaced his approval by 16 percentage points in April 2020, when the cash transfers began.

That gap shrank to just two points in August, the last month before the maximum 600 reais stipend was halved. By January the gap had rebounded to 15 points, essentially back to where it began.

With an eye on next year's presidential election, Bolsonaro has been so keen to extend the program, even if it wreaks havoc on the public finances, roils financial markets and irks Guedes.

The new aid package, starting in April, will provide four monthly transfers of an average 250 reais to a narrower set of informal workers.

Its 42 billion reais price tag is a fraction of the 322 billion reais ($58 bln) bill for last year's aid, which was almost 4.5% of gross domestic product.

The more modest program has eased some concern over the trajectory of Brazil's public debt, but also narrowed impact on poverty and inequality rates.

Joao Saboia, professor emeritus at the Federal University of Rio de Janeiro, says even with the next round of cash transfers, poverty rates will remain high.

For Sirqueira, the single mother of six, it may be worse.

Local authorities are pushing to relocate her family to a satellite city outside the capital. She has resisted their efforts, wary of how her kids will fare in a new neighborhood.

On Tuesday, they bulldozed her shack.