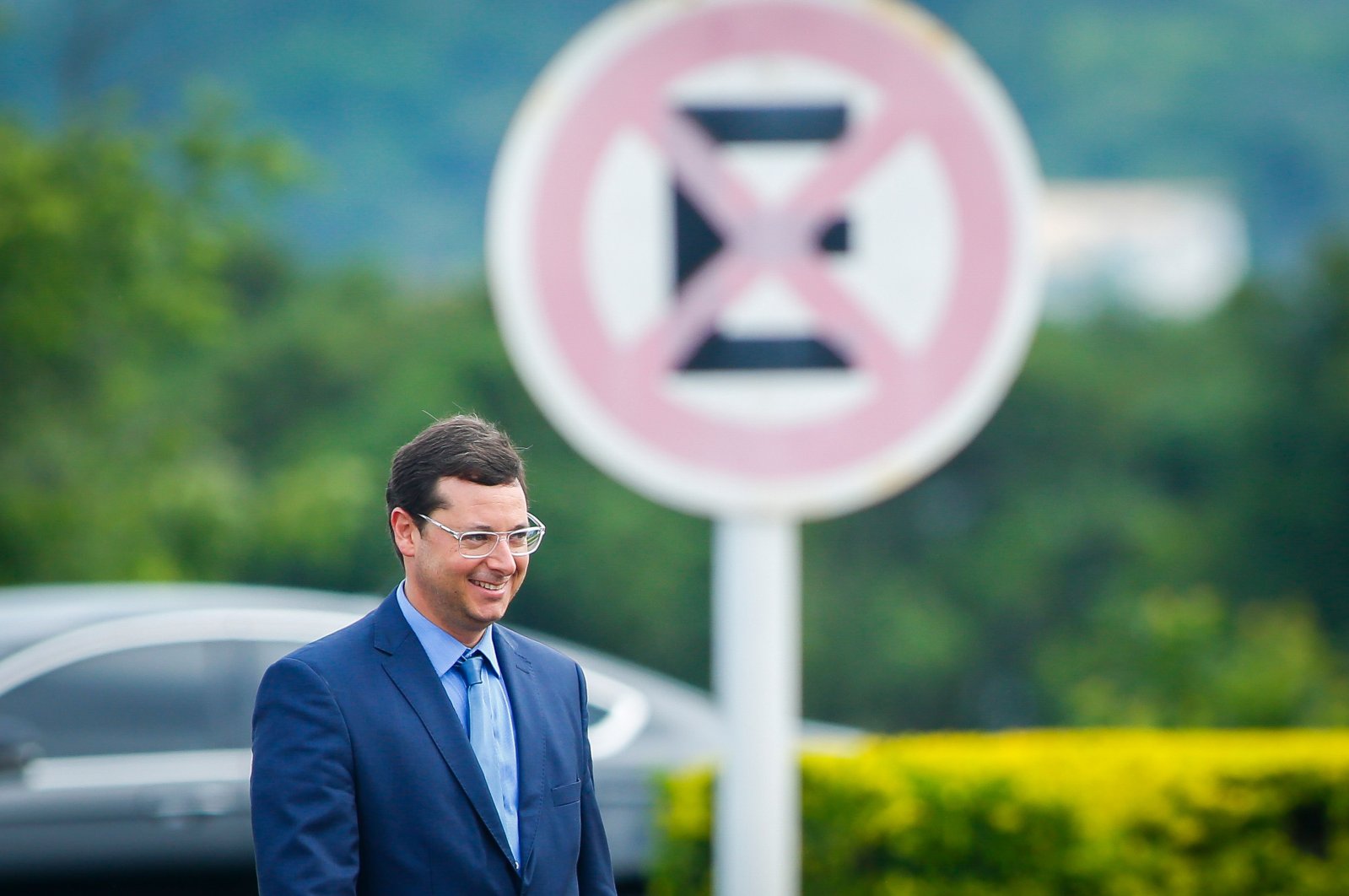 A senior Brazilian official, who attended weekend events with President Donald Trump in Florida, has tested positive for the coronavirus, marking the first time that someone known to have the virus was near the president. Trump does not plan to be tested or go into self-quarantine, the White House said.

Brazilian President Jair Bolsonaro’s communications director, Fabio Wajngarten, tested positive just days after traveling with Bolsonaro to a meeting with Trump and senior aides in Florida. White House Press Secretary Stephanie Grisham said in a statement Thursday that "exposures from the case are being assessed, which will dictate next steps.”

"Both the President and Vice President had almost no interactions with the individual who tested positive and do not require being tested at this time," Grisham said.

Wajngarten joined Bolsonaro on a three-day trip to the U.S. and on Saturday was at Trump's Mar-a-Lago club, where he posted a photo of himself posing beside Trump. A video from the event also showed him standing directly behind both presidents as they addressed a crowd. Bolsonaro and Wajngarten later attended a birthday party for Kimberly Guilfoyle, who is dating the president's son Donald Trump Jr.

While Trump was not taking any apparent action in response, two Republican lawmakers announced they will self-quarantine for two weeks after coming in contact with Bolsonaro's delegation. Republican Sen. Rick Scott of Florida, who met Bolsonaro in Miami, and South Carolina Sen. Lindsey Graham, who was at Mar-a-Lago on Saturday, announced Thursday that they will isolate themselves.

Graham's office said he had been tested for the coronavirus and was awaiting the result.

Dr. Anthony Fauci, the director of the National Institute of Allergy and Infectious Diseases, demurred when asked whether the president should be in self-isolation. Fauci has been the face of the administration's response to the public health emergency.

"Questions like that I leave up to the physicians in charge of the president's health," he said.

Meanwhile, Canadian Prime Minister Justin Trudeau said Thursday that he was quarantining himself at home after his wife exhibited flu-like symptoms. He said they were awaiting coronavirus test results.

"We had dinner in Florida at Mar-a-Lago with the entire delegation," Trump told reporters on Thursday in the Oval Office. "I don’t know if the press aide was there. But we did nothing very unusual."

The confirmed exposure comes after Trump was in repeated contact with people who themselves had contact with people who tested positive for the virus. Trump's newly named chief of staff, Mark Meadows, emerged from self-quarantine Thursday. Republican Rep. Matt Gaetz of Florida traveled back to Washington with Trump on Air Force One on Monday but isolated himself on the flight after being informed that he had been in contact with a person who later was confirmed to have had the virus.

It was not immediately clear what precautions the White House was taking to protect the president from the virus. Trump on Wednesday canceled his political travel for the coming weeks, but he has disregarded the advice of medical and public health professionals to stop shaking hands.

Grisham said in a statement that "the White House Medical Unit and the United States Secret Service has been working closely with various agencies to ensure every precaution is taken to keep the First & Second Families, and all White House staff healthy.”

The vast majority of people recover from the new virus. According to the World Health Organization (WHO), people with mild illness recover in about two weeks, while those with more severe illness may take three to six weeks to recover. In mainland China, where the virus first exploded, more than 127,000 people have been diagnosed and more than 68,000 have so far recovered.

Wajngarten initially denied a report on Wednesday that he had been tested for the virus, saying on his social media account that his health was fine. He is now in self-quarantine at home, according to the statement.

A statement from Bolsonaro's communications office on Thursday said that Wajngarten's test results had come back positive and that the presidency was adopting preventive measures to ensure Bolsonaro’s health.

Bolsonaro's son confirmed in a Thursday tweet that his father had been tested for the coronavirus and said he isn't showing symptoms.

Bolsonaro’s health has been a focus since a 2018 stabbing on the campaign trail. Since the assassination attempt, he has already undergone four surgeries with a fifth upcoming. In December, he was taken to the hospital after slipping in the bathroom of the presidential residence and banging his head.

Grisham said that under U.S. Centers for Disease Control and Prevention guidelines, "there is currently no indication to test patients without symptoms, and only people with prolonged close exposure to confirmed positive cases should self-quarantine.”